Mountain View County council has directed administration to prepare flood protection options for the Red Deer River west of Sundre and present them at next week's council meeting.
Aug 30, 2011 1:00 AM By: Mountain View Today Staff 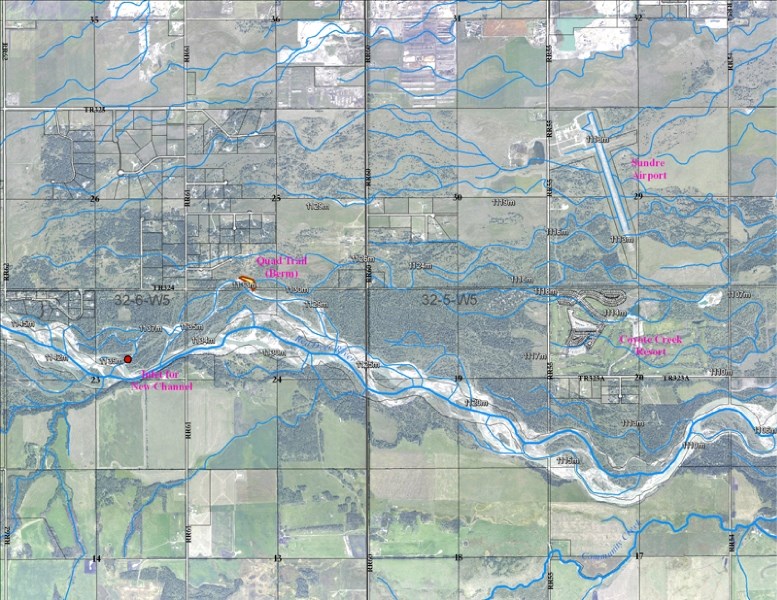 Mountain View County council has directed administration to prepare flood protection options for the Red Deer River west of Sundre and present them at next week's council meeting.Reeve Paddy Munro, raising the issue at last Wednesday's council meeting, underscored the urgency of the situation, caused by the river changing channels about seven kilometres southwest of the town at the end of June.ìIf we don't do anything, it can flood Coyote Creek, our airport, our gravel pits,î Munro told fellow councillors. With the land sloping aggressively toward town, ìit could go to Sundre,î he added.ìWe have an area out there in McDougal Flats ñ they're in peril.îThe annual taxes paid to the county by property owners in the affected area comes to $1.3 million, with $200,000 a year from Coyote Creek Resort alone, Munro said.ìIt's a tax asset and has to be looked after.îThe county has to keep applying pressure on the province to fund flood protection measures for the area, but with the government ìin turmoilî due to the leadership vacuum, ìI don't believe we can go without a contingency plan,î Munro said.Even without a provincial funding commitment in hand, the county has to ìturn dirt on Oct. 1,î he said.ìWe can't wait till spring. Half our county's gravel inventory is there. Are we going to risk that? Are we going to risk our airport? I say no. We need permits in place today so we can start working on this in five weeks.îThe first stage of a $2.5-million berm system recommended by consulting firm Matrix Solutions would cost $600,000 without armouring. While some councillors said they could support going forward with the first stage, deputy reeve Bruce Beattie expressed concern about the county funding any part of the project without senior government assistance.ìI understand the importance of this, I understand the significance of this, but the provincial government has to recognize it as well,î Beattie (Div. 4) said.ìIf it is as serious as it has been described, why isn't the province stepping up to it?îMunro suggested a portion of the first stage, tied in with a quad trail built in July on private land about 1.5 kilometres west of the new inlet, would provide adequate protection for this year.ìI'm talking 1,200 feet on one property. In my opinion that's what we need today to prevent that river from going west.îNext week's report from administration will include cost estimates for the smaller structure.CAO Tony Martens said the county has applied to the province for funding for all three stages.ìI'm hopeful there's funding Ö and the province is working to expedite approvals on this project,î Martens said.ìThey understand the urgency of it.îMeanwhile, Munro has requested a meeting with Sundre council and last week the CAOs from the two municipalities were trying to arrange a date.Mayor Annette Clews flew over the Red Deer River in July with Munro, MLA Ty Lund and Environment Minister Rob Renner.ìYou can see from the ground and from the air that it does appear to have changed channels,î Clews said.Clews said recent discussions with provincial officials about the need for disaster prevention were a hopeful sign that the province will commit funds to the county's flood protection efforts.She agreed that measures have to be taken.ìThere does need to be some remediation work done and some safeguards put in place to protect the private property and the airport,î she said.