More than 1,100 people took in the Didsbury Fair and Rodeo last weekend, and the Didsbury Ag Society members are thrilled with the turnout for the event.ìThe weather was absolutely beautiful.
Aug 30, 2011 1:00 AM By: Mountain View Today Staff 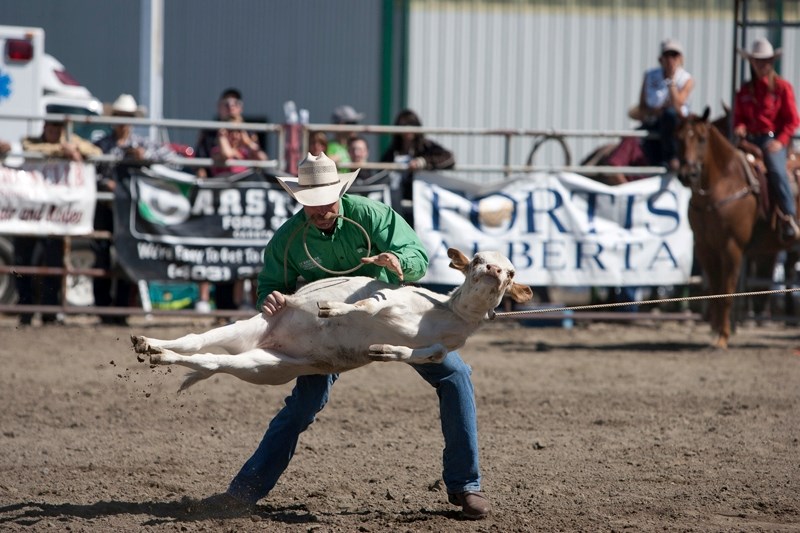 Lindsay Taylor of Parkland manoeuvres his calf during the calf roping event at the Didsbury Rodeo.

More than 1,100 people took in the Didsbury Fair and Rodeo last weekend, and the Didsbury Ag Society members are thrilled with the turnout for the event.ìThe weather was absolutely beautiful. The crowd was good ñ probably the biggest crowd we've had on Saturday for years,î said Vair Whitlow, an Ag Society director and arena director at the Didsbury Fair and Rodeo Grounds.This year's crowd of 1,159 exceeded last year's crowd of 814 by more than 300 people.ìThe weather makes a big difference,î said Erin Fredlund, the Ag Society's new event coordinator. ìWe did a lot of advertising this year too.îìI think it was the best show we've had. It went over very, very well, and it was a tribute to our two fallen members,î said Whitlow.Whitlow refers to Bert Doering and Mike Barr, two Ag Society members who have passed away since last year's rodeo.ìMike was 59 and Bert was 61, I think. Too young.îWhitlow said Doering supplied all the 2W panels for building corrals at the rodeo, and Barr was a director for a number of years, playing a large role in the building of the outdoor arena and announcers' booth.ìWe always called him (Barr) our dirt specialist, because he was always the guy that always dealt with the dirt in the arena, making sure it was right for the calf ropers and the barrel racers.îEva Meguinis, a Tsuu T'ina native and Calgary Stampede's Indian princess, was on-site at the Didsbury Rodeo Grounds, and Whitlow said the number of people she managed to visit during her time there impressed him.Whitlow said the Ag Society would like to thank all of the volunteers who made the fair and rodeo happen, noting that more than 60 people volunteered their help over the three-day event.The new beer gardens were also a hit, said Whitlow.ìThe fireworks were unbelievable this year,î he added.Thunder on the Prairies, the pyrotechnic fireworks display that took place Friday night, was free and many families attended who weren't taking in the rodeo that evening, said Fredlund.The cost of the fireworks ñ about $11,000 ñ is offset by donations and fundraising, like the $810 raised through sponsorship and entrance fees for the Mayor's Challenge Calf Scramble.The winners of the calf scramble were Dr. Andy Mencarelli and Dave Schellenberg.Calf Scramble organizer Mayor Brian Wittal said he was hoping the event would bring people to the rodeo that don't typically attend.ìI think people thought it was pretty entertaining,î said Wittal.ìOne guy got run over a little bit, trying to tackle a calf. That's not unusual knowing him,î said Wittal. ìWhen he goes, it's all or none.îWittal said he was very impressed with the number of people at the rodeo, and was surprised at the bravery of the young mutton busters.ìI couldn't believe how many kids they had for the mutton busting. That was unreal,î said Wittal.