Fish and Wildlife officers are asking for public tips after two male mule deer were shot and left west of Sundre.
Aug 30, 2011 1:00 AM By: Dan Singleton 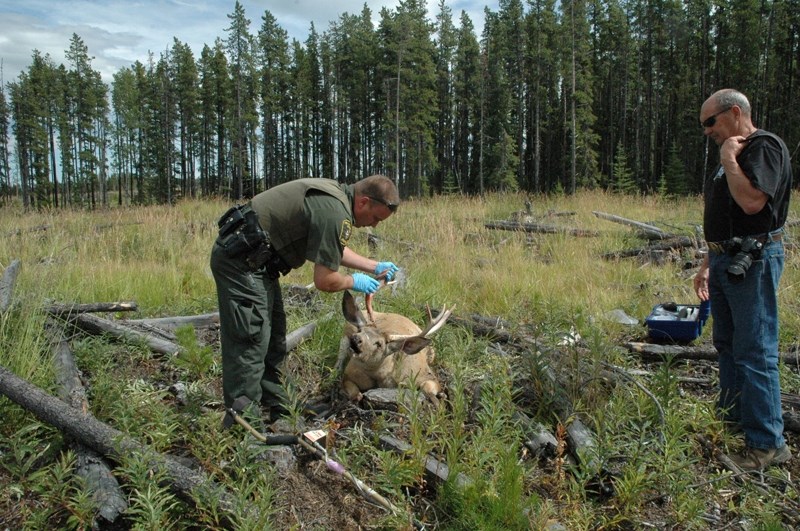 Fish and Wildlife officers are asking for public tips after two male mule deer were shot and left west of Sundre.Both the animals were shot from or near the South James River Road at separate locations about 25 kilometres west of town sometime immediately prior to Aug. 22. Officers have not ruled out the incidents being related.ìIt doesn't make any sense,î said Sundre-Olds Fish and Wildlife officer Adam Mirus. ìWhoever shot them didn't even take the head or any meat. Either they got scared that someone was coming or they did it for fun.ìIf anyone saw anything suspicious out there in the last week they should call us. We really want to hit home that people can call Report-A-Poacher hotline. It's a 24-hour, 365-day-a-year service you can use any time.îAnyone with information about the shootings is being asked to call Report-A-Poacher at 1-800-642-3800.Meanwhile, Mirus says officers are asking farmers and ranchers to be extra careful at this time of year when it comes to disposing of dead livestock.With bears very active at this time of year trying to fatten up before winter, it is important that people avoid attracting bears to properties, he said.Any dead livestock should be buried six feet and covered with lime, or disposed of through Alberta Processors.People should also be careful not to spill grains, keep garbage in secure receptacles, and call Fish and Wildlife if they see any bears causing problems.Haystack management is also important at this time of year as farmers stack their hay for winter, he said.In order to keep deer and elk away from the stacks, people are advised to surround the hay bales with bales of straw or other non-target feed, he said.Landowners can get further information on haystack management from local Fish and Wildlife officers at 403-638-3805 or 403-556-4215.Mirus is also encouraging property owners to install automatic trail cameras on their properties.The motion-activated cameras are a great way to increase security on properties by recording the licence plate number and other information about anyone who comes onto properties.ìIt can give people security when they are off the property for whatever reason,î he said.RCMP and Fish and Wildlife officers are also encouraging anyone seeing suspicious activities on rural properties in the area to contact them, and if possible and safe, to record the licence plate numbers and other descriptions of suspicious vehicles or people, he said.