After two public roundtable sessions in opposite corners of the county, Mountain View appears poised for a major shift in subdivision policies.ìThe CCN (county collector network) as a criteria for doing houses is done ñ don't want it anymore,î Div.
Feb 1, 2011 12:00 AM By: Mountain View Today Staff 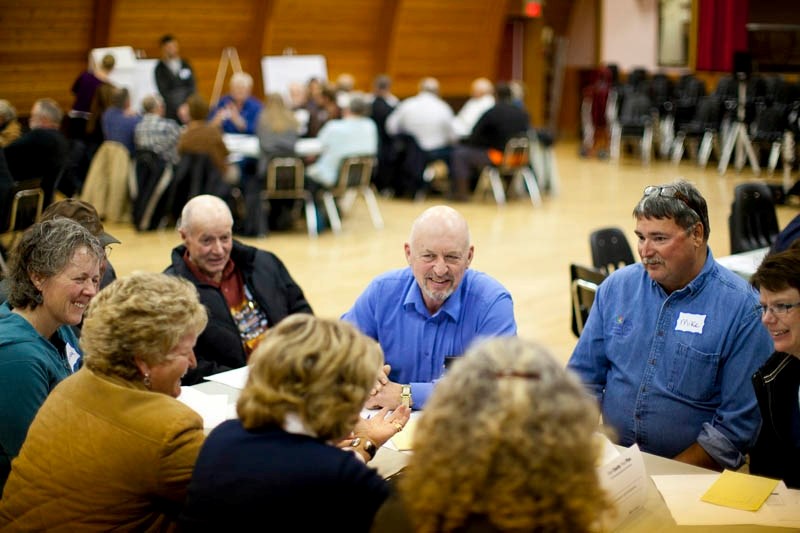 After two public roundtable sessions in opposite corners of the county, Mountain View appears poised for a major shift in subdivision policies.ìThe CCN (county collector network) as a criteria for doing houses is done ñ don't want it anymore,î Div. 1 Coun. Kevin Good told more than 60 public participants in Cremona Wednesday night, summing up the consensus at roundtables focused on agricultural issues.Instead, Good said, residents felt the county should ìuse the quality of the land as the criteria for whether the land can be subdivided or not.îIt was the same general consensus at tables directly addressing low-density country-residential development ñ the undisputed flashpoint of the municipal development plan review, spurred largely by concerns that multi-lot clusters were devouring prime farmland.ìThe first (issue) people were very adamant about was not using the CCN to determine where the subdivisions should be,î Div. 2 Coun. Patricia McKean said in her summation.ìEveryone in the county wants a level playing field,î Div. 5 Coun. Bob Orr said in his supplemental comments on agricultural issues. ìThe CCN left some with an advantage.îUnder the current MDP policy ñ which was suspended in November pending the outcome of the public review ñ low-density residential development (up to five lots per quarter) can only be considered on properties situated within 800 metres of the major roads designated as the CCN.More than 40 residents at Reed Ranch School in Div. 7 delivered a similar message the previous night, with deputy reeve Bruce Beattie saying in his summary comments that there was strong support to dispense with the CCN policy and ìhave country-residential subdivisions where they make sense.îìLook at development on poor ag land only,î Good said during the Reed Ranch summaries. ìDevelop a county land productivity scale ñ good cultivating land, good grazing land, poor grazing land.îFragmented parcels that don't lend themselves to farming were often cited as preferred locations for subdivisions, with one participant in Cremona commenting: ìThe kind of land people want for acreages is not farmland anyway. They want trees and hills.îWhile the CCN was generally rejected as a key factor in deciding where subdivisions should be allowed, there was a range of opinions expressed about how many ñ if any ñ CR parcels should be allowed per quarter, whether or not acreages should be clustered for future servicing, and what parcel size was most appropriate.At Reed Ranch especially, many participants said they were opposed to the county allowing any more acreage development, and both workshop sessions heard participants say residential subdivisions should be strictly limited to first parcel out on each quarter section.Others said acreage development should be confined to growth centres around towns, while a minority argued that landowners should be able to subdivide in order to continue farming.Preferred CR lot sizes ranged from two-acre minimums to 10-acre minimums.With preserving agriculture at the top of most priority lists, participants at Reed Ranch urged county officials to refuse subdivisions that could have a future impact on confined feeding operations, while in Cremona many residents stressed their concerns about the impact of acreage development on water supply and quality.Some suggestions were:ï Ownership timelines of at least 10 years before subdivision is considered.ï Do away with concept plans specifying potential future development and placed on title for some rezoning applications.ï Provide more public education on MDP policies.ï Establish different subdivision criteria for the east and west sides of the county.ï Expand the radius for neighbour notification and extend the timeframe for letters of objection or support.Reeve Paddy Munro ñ who before being elected had been highly critical of the previous MDP public consultation process ñ was clearly pleased with the strong turnout and vigorous engagement at both sessions.ìIn the last go-round ñ in 2007 ñ there were six people here,î Munro said at the Cremona workshop, which drew 62 people in addition to councillors, administrators and staff.The two remaining roundtables for the first phase of the MDP review will be held tonight (Tuesday) at Carstairs Elementary School and tomorrow at the Sundre Legion. Registration begins at 6 p.m. and the workshops run from 7 p.m. to about 9 p.m.Following the roundtables, council will review the public feedback and decide the scope of the MDP review at a Feb. 18 workshop, with summary reports and next steps to be released later in the month.