An artist's journey from Kurdistan

CARSTAIRS - A local artist's works are on display at the Pointen Art Gallery at the Carstairs Museum. The display is called Mountain Memories and features the work of Shirin Yamolky, a Kurdish immigrant who now lives in Carstairs.
Nov 28, 2017 12:00 AM By: Craig Lindsay 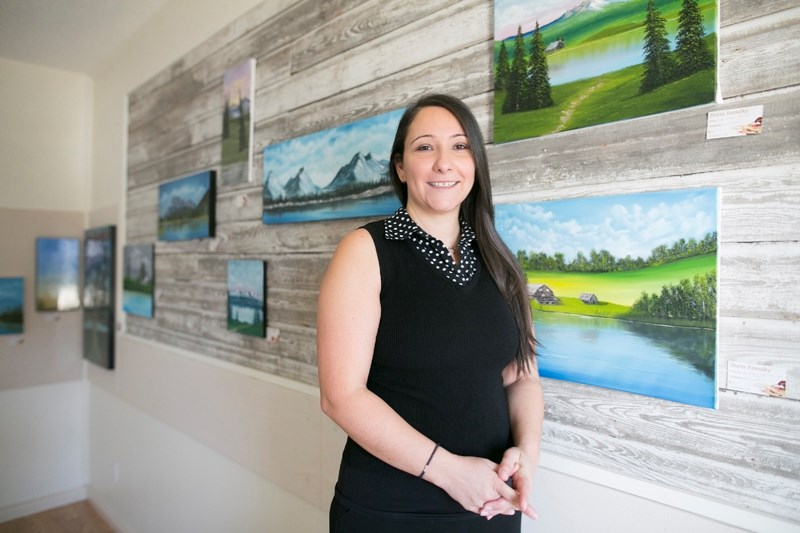 Shirin Yamolky with some of her artwork at the Carstairs Heritage Centre on Nov. 24.

CARSTAIRS - A local artist's works are on display at the Pointen Art Gallery at the Carstairs Museum. The display is called Mountain Memories and features the work of Shirin Yamolky, a Kurdish immigrant who now lives in Carstairs.

As a teenager, Yamolky came from Kurdistan to Canada in 1995 with her family fleeing the threat of chemical attacks from Saddam Hussein.

Yamolky is a self-taught artist who began drawing mountains on the walls of her childhood bedroom in Kurdistan, a mountainous region of northern Iraq, much to the dismay of her strict parents.

"We actually ended up running away from north Iraq due to Saddam's threatening the Kurds with chemical weapons," said Yamolky. "We were in hiding for two years in Turkey. It was a bit of a struggle, but we eventually ended up getting visas to come to Canada."

Yamolky said the day she and her family came to Canada was the best day of their lives.

After a couple of years of living in Vancouver with her family, she left for Calgary in 1999 with $20 in her pocket.

"I wanted to start my own life," she said. "I was always a shy kid. I decided to just move to Calgary. I've been in Alberta ever since."

After several years of living in Calgary and then Okotoks, Yamolky and her boyfriend moved to Carstairs for a quieter way of life.

"I started sketching cartoons," she said. "My dad would bring them home and I would try to sketch the characters. I fell in love with Goofy and Bugs Bunny."

Yamolky had a bad experience at school in Kurdistan where a teacher beat her with a stick for drawing in class.

"The teachers at school weren't actually teachers, they were more like government officials," she said. "Obviously, if you didn't do as you were told that was a no-no. They would beat you with an enormous stick. They wouldn't hit you on the palm - they would hit you on the back of your hand where it hurts more."

In spite of her bad experience, Yamolky kept drawing at home and kept it up when she came to Canada.

In Kurdistan, Yamolky loved the mountains and often drew them. Over the years Shirin continued to draw with pencils progressing to acrylics and oil paints, inspired by the Rocky Mountain landscapes that remind her of Kurdistan.

"I absolutely love the Rockies," she said. "My boyfriend is a photographer. We'll go out to Banff, Canmore and Lake Louise. So a lot of the paintings I have are of mountains in Alberta. I'll often paint mountains from my boyfriends photos."

Yamolky is very thankful for the warmth and friendliness of the Canadian people that welcomed her here. She is glad to get the chance to do art.

"To me if you look at paintings, it's how I feel," she said. "It brings out different feelings. Some people know how to express by speaking or presenting themselves; for me (art) is how I express myself.

"It makes me feel happy when I paint or sketch. I'm content. I like to pick up different techniques from people and put my own twist on it. When I'm painting I'm the only one on the planet. It's like I'm on cloud nine."

Mountain Memories by Shirin Yamolky is on display at the Pointen Art Gallery at the Carstairs Museum until Dec. 18.