Ag board given program reviews

The Mountain View County (MVC) agricultural service board has received annual reports on the Alternative Land Use Service (ALUS) program and the Riparian & Ecological Enhancement program.
Nov 27, 2018 6:17 AM By: Dan Singleton 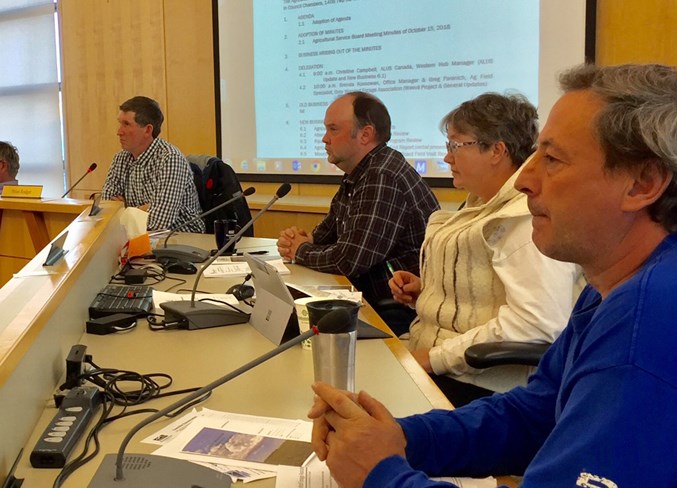 The Mountain View County (MVC) agricultural service board has received annual reports on the Alternative Land Use Service (ALUS) program and the Riparian & Ecological Enhancement program.

The reviews came during the board’s recent regularly scheduled meeting in council chambers.

The ALUS program is an environmental stewardship program designed to preserve agriculture land and natural spaces such as wetlands. It operates in six provinces, including Alberta; Mountain View County is one of the participating partners.

In 2018, 11 producers in MVC were approved for funding for projects totalling $56,476, with an additional $7,800 used to fund MVC administration of the program, project signage, video, infographics and project verification, members heard.

“It is estimated that MVC producers contributed approximately $51,187 to project establishment,” administration said in a briefing note to the board.

“Two producers had their ALUS contracts up for renewal and they renewed for an additional five years. One producer has not been able to complete their project during the initial three-year terms (and) no annual payments or establishment costs have been paid.”

Since 2015, 25 area landowners have been approved for ALUS projects in the county, impacting 1,172 acres of wetland, riparian and upland areas.

Members passed a motion changing the term of contracts from three years to five.

Mountain View County identified areas of focus for the ALUS program include “preserving and establishing trees in areas of low concentration, reclaiming alkali or marginal soils to native stands, increasing and promoting pollinator establishment, and reclaiming marginal cropland for buffering around streams.

“Eleven followup riparian health assessments have been completed for 2013 riparian and ecological enhancement projects, all project sites scored healthy except one which changed ownership,” administration said.

Christine Campbell, western hub manager with ALUS Canada, appeared before the board on Nov. 19, updating members on some of the organization’s ongoing efforts.

Brenda Kossowan and Greg Paranich of Grey Wooded Forage Association also appeared as a delegation before the board on Nov. 19, giving a general update to members.

Brian Rodgers has been reappointed as ASB chairman for 2019.

The board will submit a farm family nomination from Division 4 for the 2019 BMO Farm Family Award.

Meanwhile, ASB members passed a motion recommending that $3,000 be provided under the 2019 ASB budget to the Foothills Forage and Grazing Association and the Grey Wooded Forage Association.

The annual ASB budget, which will be reviewed by members at the December board meeting, must be considered for approval by county council.

The ASB advises council and the province on agricultural related issues.