A straight shooter with a big heart

The Sundre community not only lost a dedicated and loyal friend when longtime local resident and mentor Myron Thompson died, but the province also lost a part of itself, said the leader of the United Conservative Party.
Jan 14, 2019 12:00 PM By: Simon Ducatel 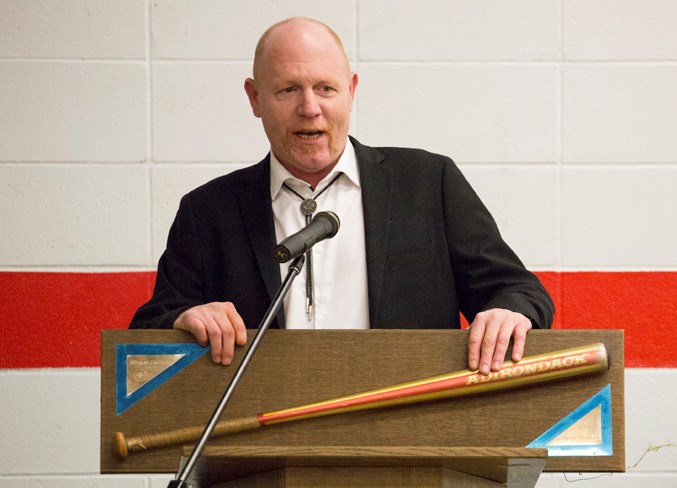 Myron Thompson Jr. fondly recalled Saturday afternoon at the Sundre High School a story about his father’s favourite baseball bat during the public service that was attended by about 700 people.

The Sundre community not only lost a dedicated and loyal friend when longtime local resident and mentor Myron Thompson died, but the province also lost a part of itself, said the leader of the United Conservative Party.

“In losing Myron, we have not only lost a friend, but we’ve lost a little bit of Alberta,” said Jason Kenney Saturday afternoon at the Sundre High School gymnasium during Thompson's celebration of life.

About 700 people attended to honour the legacy of a man known by those close to him as tough on the outside with a heart of gold on the inside. Although Thompson’s service was a solemn and emotional affair, there was also plenty of laughter conjured up by the fond, heartfelt memories of a man whose decades of service to community and country touched the lives of thousands.

Born on April 23, 1936 in Monte Vista Colo., Thompson — who once worked as an educator, served several terms on Sundre’s council and also served as a member of Parliament — died Jan. 5 at the age of 82 after being diagnosed with pancreatic cancer. The Jan. 12 public service followed a private internment ceremony for family and close friends at the Sundre Cemetery.

“What a gift you — the people of Sundre, Alberta — have given today,” said Rev. Richard McInnes, a friend of Thompson, who officiated the service with Rev. Todd MacDonald, from the Main Avenue Fellowship Church, of which Thompson was a member for decades.

Honorary pallbearer Ed Morgan sang the hymn What a Friend We Have in Jesus, later adding the song was one of Thompson’s favourites.

“Most of you that are here today would recognize what a friend we had in Myron,” said Morgan.

Thompson’s sons Dennis and Myron Jr. shared some personal stories about their father, for whom they expressed unreserved pride.

Dennis, the youngest, said his dad portrayed a tough exterior.

“A look that could instill fear into any of my friends, prompting them to ask what may happen if they came over and got caught misbehaving,” he said, eliciting light laughs.

“As a result, most of my time was spent playing with my friends at their houses,” he added, conjuring a louder round of laughter.

“What they didn’t know at the time was that dad was all heart. He cared for everyone. He just wasn’t worried about calling people out when they were acting like knotheads.”

Whether a close friend, a member of the community, or a politician in Parliament, Thompson was not shy about letting a person know when he or she was being a “knothead,” he said.

Graduating from high school in the early 1950s, Thompson went on to play baseball in college and was spotted by a scout for the New York Yankees who invited him to try out as a catcher, a position held by future Hall of Famer Yogi Berra, he said.

“He talked about that experience as one of the best in his life.”

Drafted into the U.S. army, Thompson was being deployed to serve security in the fallout of the Korean War when a high-ranking official pulled him off the plane in Hawaii to inform of a change in orders, he said.

“My dad’s entire career in the army was spent in Hawaii playing baseball,” he said, drawing more laughter.

The 1960s were a good decade for Thompson, who after leaving the army returned to Colorado, completed his degree and later met his future wife Dot in a small Montana town, he said.

“He must have really swept her off her feet because she was supposed to be there for a blind date with another boy. After one opportunity on the dance floor, Dad had won her heart.”

The two tied the knot in 1966, and had their first son, Myron Jr. in 1968, relocating shortly after to Sundre, where Thompson started his career in education, he said.

With his big heart, Thompson, over the span of 22 years touched the lives of thousands of students as a teacher, guidance counsellor and eventually as a principal, he said.

Dennis said the two most important lessons his father imparted were about service to community and others as well as compassion for everybody.

“He loved his family intensely, but also everyone he came across,” he said, adding regardless of whether someone was a best friend or biggest hater, cheering him on or staunchly opposed, nice or a knothead, “he loved you.”

If his dad could share a final thought, Dennis said it would be to love and serve a higher power as well as family and neighbours, and in so doing “your life will be filled with compassion and peace.”

Myron Jr. reminisced about his father’s favourite baseball bat, which had a wooden handle with an aluminum shaft, a style that was made illegal in the 1970s.

“I had a tendency to take the ball bat out of his equipment bag,” said Myron Jr.

One day, the bat went missing and Thompson concluded his son had misplaced it.

“My dad’s not perfect — he just assumed it was me that took it out of the bag and left it somewhere on Snake Hill or something,” he said.

“It was a good evening when he came home the next week and found out the Sundre Outlaws (a baseball team) had taken the bat and had it mounted on a plaque. He woke me up that morning when he came home with tears in his eyes, full of hugs and apologies, because he realized then that I hadn’t taken it.”

At the age of 16, Myron Jr. was told he could not attend a party in James River, but disobeyed and attempted to catch a ride with a couple of guys who tucked him in the back of a car. They didn’t get far before Thompson pulled out in front to stop them, and Myron Jr. said he begrudgingly found himself grounded and sulking in his room. However, the next day, he learned the vehicle had crashed and the two occupants hospitalized.

“He saved my life that day, that’s the kind of guy he really was,” Myron Jr. said about his father.

After being diagnosed with cancer, Thompson opened an envelope he had prepared in the event of his death, and Myron Jr. shared the first couple of sentences from the letter inside.

“Don’t fret for me, as you know where I am and one day we will be together again. Be at peace, seek the Lord daily and He will help during these times.”

Ron Fisher, who was among the honorary pallbearers, said he quickly noticed when Thompson first arrived in Sundre that the educator was a doer who hated red tape and preferred to do things his own way. Many of his former students would later come back to say Thompson had been tough but fair and that they in the long run appreciated that, said Fisher.

“Myron had a special way — it was Myron’s way,” he said, adding Thompson brought his convictions with him to Ottawa when he served in Parliament.

“He often said, ‘Say what you mean, and mean what you say.’ Sometimes when you listen to politicians, after 10 or 20 minutes, you don’t know what they said! But with Myron, you knew what he said.”

Although Thompson’s unapologetic disdain for political correctness earned him a reputation for stirring controversy, he had a big heart and an abundance of passion for people, he said.

Thompson was like an old oak tree with strong roots that would draw people towards him to lean on, “and he supported them. He was always there for people. He will be missed but ever remembered.”

Kenney also paid tribute during the service, and said following a prayer that, “In so many ways, he personified this place. Like those who built this province, he was an Albertan by choice, not by chance.”

When Thompson came to Sundre, he “brought with him the frontier values of faith, family, independence, and devotion to community,” said Kenney.

And when Thompson donned his Stetson on the Hill, it was not a fashion statement but rather a value statement “that he was there to change Ottawa and not be changed by Ottawa,” he said.

“He challenged the Speaker’s ruling that he couldn’t wear the Stetson, arguing that it was an important cultural symbol that represented wild rose country."

Although misunderstood by some people, Thompson was a straight shooter, he said.

“What they saw was the tough guy exterior, but you had to get to know him to see underneath he had a heart of gold.”

During the ceremony, Richard and Charlotte McInnes also performed a duet of Sweet Beulah Land as Thompson had requested, while Connie Newsham graced the gathering with her voice in a solo rendition of How Great Thou Art.

The service wrapped up with members of the Sundre Royal Canadian Legion Branch #223, as well as the Sundre Fire Department and RCMP, pinning poppies on a ceremonial pillow while Sharron Kirby sang Amazing Grace following a few words from Comrade Chaplain Tim Kirby.

“Now we can hope that somewhere in the fields of the Lord, he is playing ball with his beloved Yankees,” said Kenney.