Weinstein jury back to work with signs of split over charges 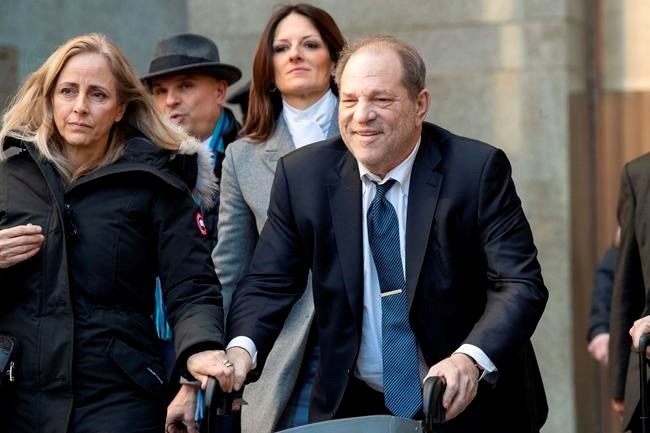 NEW YORK — Jurors at Harvey Weinstein’s New York City rape trial are set to resume deliberations Monday after they are at odds on the top charges in the closely watched #MeToo case.

The jury sent a note to Judge James Burke at the end of a fourth day of deliberations on Friday, asking if it was permissible for the panel to be hung on one or both counts of predatory sexual assault against the disgraced movie mogul while reaching a unanimous verdict on lesser charges.

The judge responded by ordering the jury to keep deliberating and try to reach a unanimous decision. The query sparked speculation that the trial could end with a partial verdict, but Burke has not addressed that.

Previous notes suggested that jurors were focused on a key aspect of both predatory sexual assault counts — “Sopranos” actress Annabella Sciorra's allegations that Weinstein attacked her in the mid-1990s. The jury must factor in Sciorra’s account, along with the accusations that Weinstein raped an aspiring actress in March 2013 and forced oral sex on former film and TV production assistant Mimi Haleyi in 2006, to find him guilty of predatory sexual assault.

A guilty verdict on just one of those two predatory sexual assault charges would likely send Weinstein to prison for the rest of his life.

Weinstein has maintained any sexual encounters were consensual.

The Associated Press has a policy of not publishing the names of people who allege sexual assault without their consent. It is withholding the name of the 2013 rape accuser because it isn’t clear whether she wishes to be identified publicly.

For more coverage of the Harvey Weinstein case, visit: https://apnews.com/HarveyWeinstein

Elton John-led concert to re-air; film academy aids workers
Apr 3, 2020 2:08 PM
Comments
We welcome your feedback and encourage you to share your thoughts on this story. We ask that you be respectful of others and their points of view, refrain from personal attacks and stay on topic. To learn about our commenting policies and how we moderate, please read our Community Guidelines.