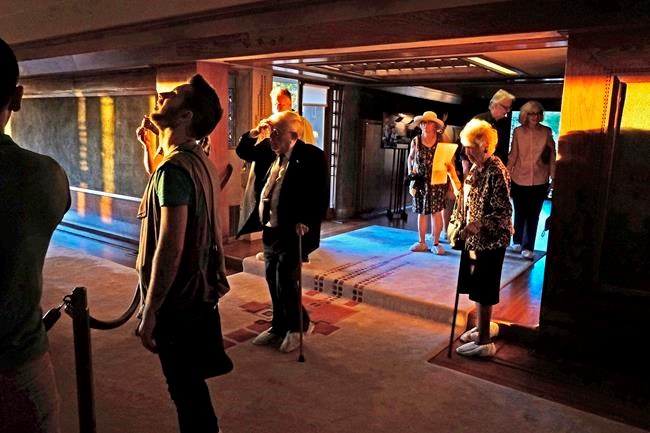 Los Angeles Department of Cultural Affairs officials also attended the unveiling at the Hollyhock House, which earned the city its first World Heritage designation in July.

There are 1,121 World Heritage Sites globally, with 869 of those awarded cultural status. The Hollyhock House is one of eight Wright buildings representing the first U.S. modern architecture designations on the World Heritage list.

The others Wright buildings include the Solomon R. Guggenheim Museum in New York City; the Unity Temple and the Frederick C. Robie House in Chicago; Fallingwater in Mill Run, Pennsylvania; the Herbert and Katherine Jacobs House in Madison, Wisconsin; Taliesin in Spring Green, Wisconsin; and Taliesin West in Scottsdale, Arizona.

Among his most iconic buildings was the Guggenheim with its spiral ramp for viewing galleries. It was completed in 1959, the same year Wright died.

Built between 1918 and 1921 on a hill in East Hollywood, the Hollyhock House in Barnsdall Art Park was almost demolished in the 1940s. The structure is named for stylized motifs of the flower of the same name that dominate its concrete exterior.

The Hollyhock House, Wright's first California commission, is now owned by the city of Los Angeles and serves as an arts .

“The unveiling of the plaque,” O’Farrell said Sunday, “underscores what we already know: The structure represents an unparalleled symbol of cultural heritage and an outstanding contribution to design in the city of Los Angeles and the world.”

The howling: Americans let it out from depths of pandemic
Apr 10, 2020 10:41 AM
Comments
We welcome your feedback and encourage you to share your thoughts on this story. We ask that you be respectful of others and their points of view, refrain from personal attacks and stay on topic. To learn about our commenting policies and how we moderate, please read our Community Guidelines.