Artist hikes length of Vermont, painting along the way 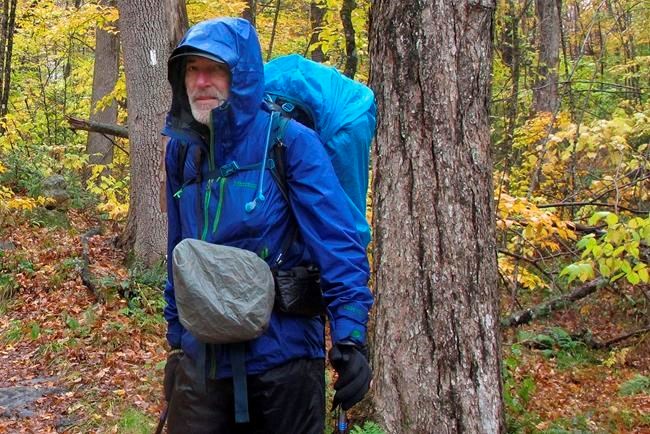 MANCHESTER, Vt. — After hiking over 200 miles (320 ) on the country's oldest long-distance trail, Rob Mullen had just 3 miles (5 ) to go in the rain to meet up with his wife and father for a break.

He kept dry with his foul weather gear as he walked down the trail with a backdrop of trees sprouting fall's orange and yellow leaves and carrying trekking poles and a big stuffed blue pack on his back that held his precious painting kit.

Mullen, a 64-year-old wildlife and wilderness artist, is hiking the 272-mile () Long Trail that runs the length of Vermont and over its highest mountains from the Canadian border to the Massachusetts state line and painting sights along the way.

He was nearing the end of his monthlong journey and planned to finish as soon as Saturday afternoon with half a dozen paintings and several thousand photos from which to paint. He's also coming away with sense of hope about the country from the people he’s met along the trail.

“I’ll be painting from this trip for a long time,” he said during his break off the trail in Manchester on a Tuesday.

Mullen, who has done a number of wilderness canoe trips in Alaska and Canada, had planned to paddle in the Northwest territories of Canada this year with three others. But then the coronavirus pandemic hit.

He decided to do the entire Long Trail as a painting trip and to raise money with his art for the Vermont Wildlife Coalition, of which he is a board member, and the Green Mountain Club, which maintains the Long Trail.

Mullen managed to his plan to hike a certain distance and then paint a painting on the first day. He got to a shelter around 4 p.m., banged out a painting of an erratic boulder, cooked dinner and went to bed, he said.

But the northern part of the trail with the bigger mountains is tough and he admits he hadn't trained properly, which slowed his pace.

“I mean I was really suffering," he said, adding that he stopped to meet up his wife to hand off some weight, including his 8-pound (3.6 kilogram) painting kit. But he wasn't about to give up. As he continued, he gained strength and took back the painting kit. At times, he said the scenery was breathtaking.

Unlike paddling, provides a view he can see for miles, showing peaks poking through the clouds at higher elevations, his wife Bonnie Rowell said. She meets up with him about every five days to resupply him with food.

Along the way, Mullen has seen black bears and in a special sighting, a gray fox. And he's met many hikers who are either hiking the Appalachian Trail from Georgia to Maine or, like himself, Vermont's Long Trail, sharing shelters with them for the night or meeting up on the trail.

“You get these ephemeral friendships,” he said, of the bonds he made with strangers along the way.

The hikers look out for one another, share gear and help to fix what's broken. When two hikers ran out of fuel on a recent night, another hiker loaned them a fuel cannister, he said. And so-called trail angels leave water at road crossings and other spots for hikers.

His monthlong hike was also a reprieve from the polarizing political debate in the country, he said. He hasn't heard a political discussion in weeks.

“It certainly gives you a little hope that the apparent polarization that comes across when you’re watching the news doesn’t go that deeply into the populace maybe, at least not in many of them. So it was encouraging for me," he said.