During the next few weeks, more than 60 of the multilingual stop signs will be placed in Fort McKay, Anzac, Conklin and Janvier.
Apr 18, 2021 10:45 AM By: Sarah Williscraft, Local Journalism Initiative Reporter 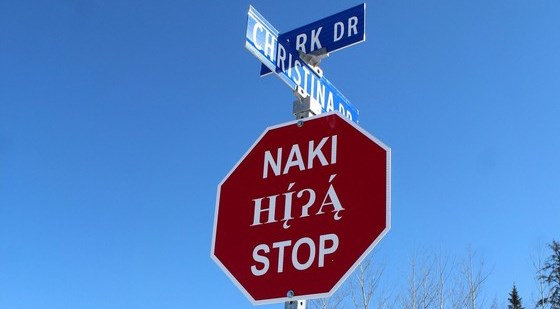 During the next few weeks, more than 60 of the multilingual stop signs will be placed in Fort McKay, Anzac, Conklin and Janvier. Fort Chipewyan was the first hamlet to get these stop signs in November.

“To some it may not mean lots, but to the Indigenous people around here it’s very important within our community,” said Justin Bourque, CEO of Willow Lake Métis in Anzac. “It’s important we spend a lot of time recognizing the Cree, Dene and Métis peoples of this land.”

Bourque called Anzac a hub for rural communities in the southern half of the Fort McMurray Wood Buffalo area. Anyone passing through Anzac will now be reminded of the land's Indigenous language and culture.

“This just amplifies one of our own community initiatives, and that’s to promote our identity a little bit more as a nation and as an Indigenous people,” said Bourque. “It’s just an example of how the municipality is working with Indigenous communities on the road to reconciliation.”

Dennis Fraser, the municipality's director of Indigenous and rural relations, said in an email that language is a bridge for identity, culture and ancestral knowledge.

“When a language dies out, future generations lose a vital part of culture that is necessary to completely understand it,” said Fraser. “Songs and stories are reliant on language so these important cultural elements can be passed on from generation to generation.”

In November, Mayor Don Scott said similar stop signs could eventually go up in Fort McMurray. Fraser could not say when this could happen, but said he is encouraged by the municipality’s commitment to promote languages in Indigenous communities.

“When we share our languages, it has a way of bringing us all closer together,” said Fraser.

The municipality has posted to its website its own efforts and resources on meeting the Truth and Reconciliation Calls to Action.

An October 2019 report commissioned by the municipality also surveyed the attitudes First Nation and Métis leaders had towards their place in the region. At the time, the report found the administration of the day was “proactive” in incorporating the calls to action into its organizational structure, but was lagging on delivering, or lobbying for, basic services in rural communities.