Young Innisfailians step up for the ski hill 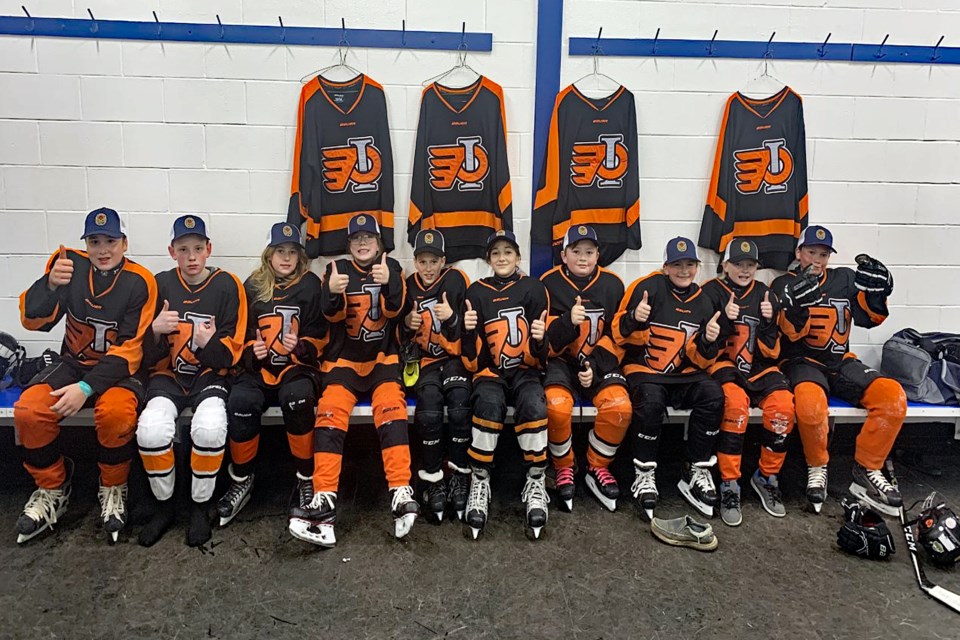 INNISFAIL – The disappointment of a lost minor hockey season has turned into benevolent celebration for a group of minor hockey players.

With the COVID-19 pandemic forcing the cancellation of the remaining Innisfail Minor Hockey Association season for the peewee Canada Malting Flyers, the 13 players – seven boys and six girls – decided to spin the heartbreak into a gift from the heart.

“We were doing an ongoing internal bottle drive to raise money for extra practice times, but sadly those ice times will not be realized,” said team coach Jon Weddell. “Once we have paid off our invoice to IMHA, and any other costs, we will have a small pot of pooled cash left over, and a pretty good trailer load of bottles.

“Now, the players and families of the team are thinking we will donate the leftover money to the food bank, and the load of bottles to the Innisfail Ski Hill in our team’s name,” he added.

The association has been shut down since Dec.13 when the Alberta government announced tough sweeping COVID restrictions. Earlier this month, the IMHA announced it was cancelling the rest of the season, much to the disappointment of its 244 registered players from the U7 to U18 levels.

“There was disappointment when (play) was originally suspended back before Christmas, but everyone was still trying to feel positive and be hopeful that we were going to get back at ‘er,” said Weddell. “I think everybody realistically knew that AHS likely wouldn’t say to go back with only a few days before the Christmas break anyway, but we really felt like we had a good chance of going back to play in the New Year.”

But the initial disappointment for his 12- and 13-year-old players to lose a hockey season was short lived. Thinking of others became more important. The financially challenged ski hill, which was denied a crucial provincial grant of $125,000, will realize a small but heartfelt donation from the proceeds of a bottle collection.

"The team decided that instead of divvying up a few dollars between all the families, we'd try to spin something positive out of a kind of lame situation,” said Weddell, who noted the players and their families had been collecting bottles since last October to cover the cost of additional practice time.

“The team decided to donate the bottles to the Innisfail Ski Hill because most of the kids have been enjoying it there this winter. It is a charity they can really buy into because it is something they connect with.”

As well, the Innisfail and District Food Bank will also receive a donation. The Canada Malting Flyers will give the agency leftover money once the team cashes out its parent seed money account, which was used to cover team expenses over the season.

Weddell said all of the collected bottles are in his old utility trailer and he will soon hand them over to the ski hill, which just ended a three-week bottle drive of its own.

“It’s great and awesome that they found a place to put the money that they are unable to use this year, and it is much appreciated from the whole club and everybody,” said Brent Jackson, president of the ski hill, who added the new $385,000 chalet is almost completed. “Hopefully, those kids will be able to get out and do a little skiing if they can’t play hockey.”

In the meantime, Jackson said local fundraising for the new chalet is ongoing, and the response from the public has been good. Jackson said skill hill officials are still working on a proposal to give to the town for additional local financial and/or in-kind support.