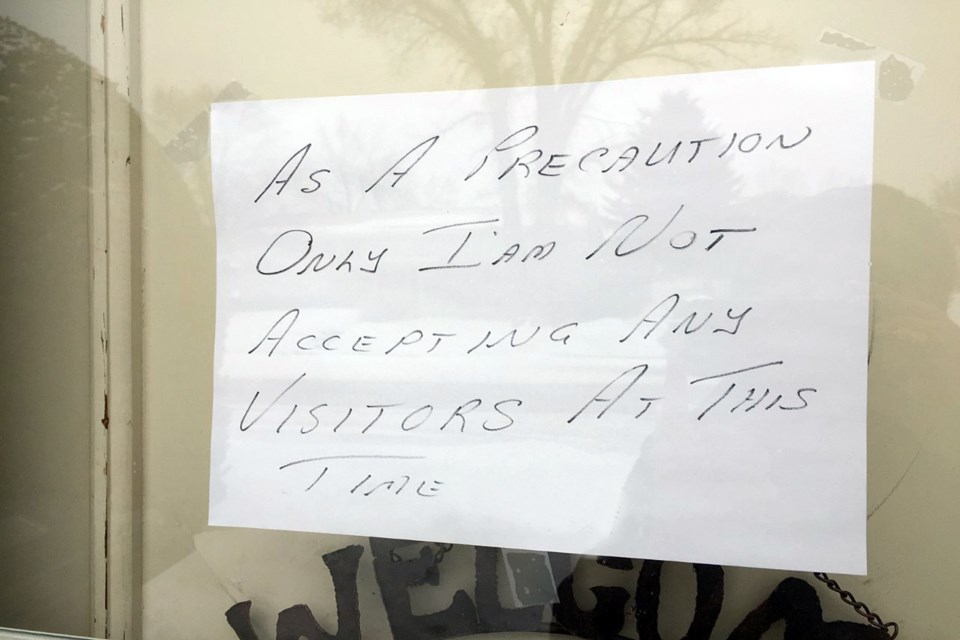 One of many cautionary signs now increasingly appearing at entrances to Innisfail homes and businesses as a warning against COVID-19. The town now has its first confirmed reported case of the virus. Johnnie Bachusky/MVP Staff

Editor’s note: Story has been updated with quotes from an Alberta Health Services spokesperson.

INNISFAIL – A 61-year-old local resident is bravely home after she was tested at hospital on Tuesday and told she has the COVID-19 virus.

An Alberta Health Services (AHS) spokesperson said last night the woman’s case has not been confirmed to be the COVID-19 virus.

Heather Kipling said all confirmed cases are posted on the provincial government’s website once they are lab confirmed which takes 24 to 48 hours.

“So it’s not like someone went to the hospital, gets a swab and gets it confirmed immediately. It does take some time for that to come back as a confirmed result,” said the AHS central zone communications director.

The woman, who asked not to be identified, is the first publicly self-identified resident of the town to say she has been confirmed positive for the virus.

“I certainly understand that people are concerned and are worried about COVID-19 but it is not a confirmed case,” said Kipling.

The woman’s 61-year-old husband, who just returned home from his oilfield job in Fort McMurray, is also ill at home but there is no confirmation yet he has contracted the disease.

“This is outrageous,” said the woman, who has lived in the town the past two years and works as a contract custodian at Bowden Institution. “This is one heck of a nasty cold.”

The woman, who is now experiencing a bad cough and shortness of breath, was treated at the Innisfail Health Centre for an upper respiratory infection last fall.

“I got it all fixed up but had this continuous cough,” she said. “I never thought nothing of it because I had my puffer.”

However, on March 15 she began to feel a chill, and then the coughing started. “Then I thought, ‘oh my God what is this?' I just left this and used my puffer, drank my water and took some Advil,” she said. “And then it just started getting worse, and I was getting more feverish and staying in bed and having shortness of breath and this nasty, nasty cough.”

The woman said her husband came home from the oilfield on March 16.

“He said, ‘this doesn’t sound good’ and we, for days, we tried the 811 number. I phoned and phoned and phoned but there was just no way getting through,” she said, adding her husband finally got through but was told to call the hospital to have an ambulance come to her home.

The ambulance did come on March 17, arriving when she was burning up with a fever of at about 105 Fahrenheit. Hospital staff administered an IV drip, took x-rays and blood tests.

“And the doctor came back and said, ‘you got it’’’ she said. “The fortunate thing is, he said, is that you don’t have the pneumonia part, which is the biggest concern. He said if I had the pneumonia I would have stayed in the hospital.”

The woman said was then sent home and placed under a 14-day quarantine. “I said, ‘fine’ but now my husband is sick. Yes, he has the cough and he’s got the chills.”

It has not been confirmed yet whether her husband has contracted COVID-19 either.

Kipling said the hospital is safe and “patients are not at risk from this case.”

In the meantime, the woman is asking Innisfailians and all members of the public to listen to every professional health-care worker offering advice, either in person, or in every form of media.

“You have to listen to what somebody is saying, even if it means you have to stay in,” she said. “You stay warm and drink warm water. And you have to eat because I am at a weak stage right now because I have not eaten in three days. I have to stay hydrated. Warm water helps but at room temperature but not cold. If you have a dry mouth you got to stick to the drinking.

“This can happen to anyone,” she said.

COVID-19 UPDATE: Follow our COVID-19 special section for the latest local and national news on the coronavirus pandemic, as well as resources, FAQs and more.