INNISFAIL - Barry Ellis is committed to saving something old, something absolutely special.
Nov 29, 2016 12:00 AM By: Johnnie Bachusky 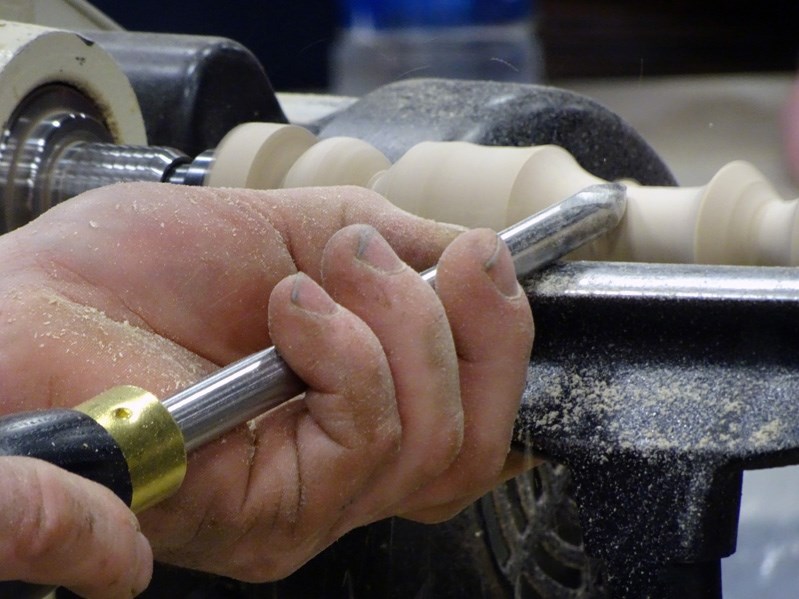 INNISFAIL - Barry Ellis is committed to saving something old, something absolutely special.

He is a retired online learning technologist who has lived in Innisfail since 1983 and wants to pass on the ancient art form of woodturning to local citizens, particularly the young.

“We don't want the art to die. We want young people,” he said.

Woodturning differs from most other forms of woodworking, as the wood is moving while a stationary tool is used to cut and shape it, creating intricate shapes and designs.

Woodturning originated around 1300 BC when the Egyptians first developed a two-person lathe, with one turning the wood with a rope while the other cut shapes with a sharp tool.

Today's woodturning world now utilizes highly advanced lathes, and committed turners have formed guilds across North America. In Alberta, there are four guilds, including the Central Alberta Wood Turning Guild (CAWTG) that was formed in 2015. The guild now has 44 members who meet once a week in Red Deer. There are five members from Innisfail and three from just outside of town.

And now Ellis not only wants to spread the word in Innisfail about the immense satisfaction of woodturning, he wants to create a local group.

“We want more people to know the guild is there and to support them in their hobby. I know there is a lot of other people who don't know we exist and the idea is, ‘we are here. We are doing things. Come and join us,'” said Ellis, adding a future meeting is being planned for an Innisfail group.

“We want to find other people that have the same types of interest. “We are trying to encourage young people, because the school has lathes and they are teaching kids how to turn, but they have no place to turn.

“The idea is that they can join the club and participate in our activities and we would encourage them and help them,” he added.

One of the most important areas guild members can teach the young is that woodturning need not be feared from a safety point of view, said Ellis.

“It isn't dangerous like a table saw, or like a shaper. It is not dangerous like those tools, but it is dangerous in the sense you could get your clothing caught on a lathe,” said Ellis. “Every week at our meeting we have a safety session and we always talk about various safety tips. Rarely, ever, does anybody get hurt.”

Ellis said current members dedicate themselves to creating almost anything from wood that is turned, including toys, pens and kitchenware.

As for himself, Ellis turns components for cabinets, including chair legs, shafts for the centre of tables, and front pieces for kitchen islands.

However, he also turns wood to satisfy his “real” number 1 passion. He is a luthier, a person who builds and rebuilds musical instruments.

“My specialty is banjos. And the round resonator on the back of banjos? I turn the resonators. And the hoop in the banjo? I turn the hoop on my lathe,” said Ellis, who has been woodturning all his adult life. “You can't retire to an armchair. I love woodturning because it is so exciting. You get inside this wood and you open it up, and wow. It is just gorgeous.”

For more information on woodturning and the plan to create an Innisfail group contact Ellis at 403-396-2640.

"We want to find other people that have the same types of interest. "We are trying to encourage young people, because the school has lathes and they are teaching kids how to turn, but they have no place to turn."