Town of Innisfail set to change course on media advertising 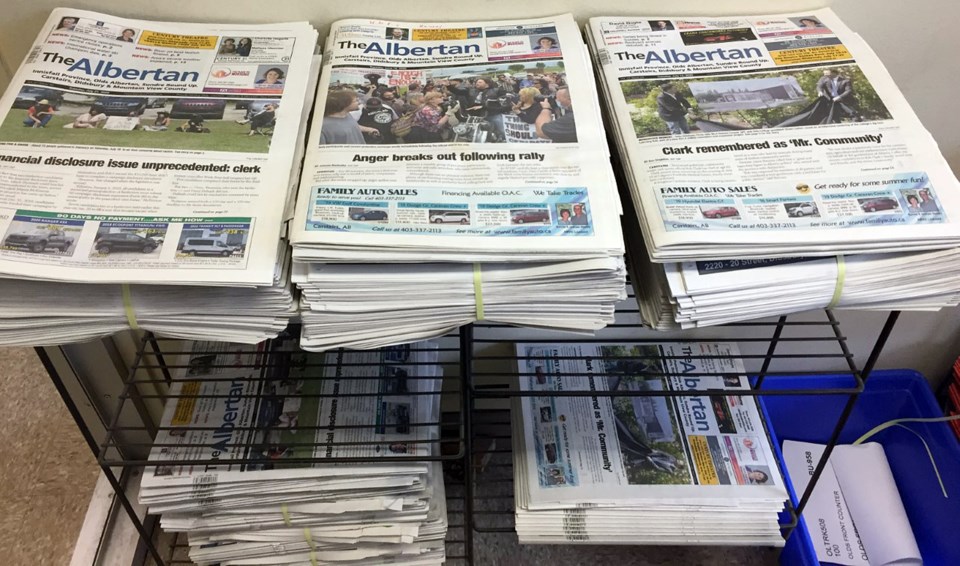 There will be a public hearing at Innisfail town hall on Aug. 10 into the proposed Public Notification Bylaw that proposes making the town's website its primary vehicle for advertising public notices. If passed, it could mean less reliance and expense on traditional print advertising. Johnnie Bachusky/MVP Staff

INNISFAIL – Town council will be hosting a public hearing next week on a proposed Public Notification Bylaw that aims to change the way the municipality advertises events and decisions.

If passed, the Town of Innisfail will use its website more, and less with the local newspaper – The Albertan – for advertising bylaws, resolutions, meetings or public hearings. The proposed bylaw, inspired by updated changes to the provincial Municipal Government Act (MGA) that now allows alternate forms of advertising, will also serve as a cost-saving measure for the town, according to a July 18 report to council.

“Electronic advertising is typically low or no cost in comparison to newspaper advertising,” said the report to council that was presented by Meghan Jenkins, the town’s manager of community planning and sustainability. “Typical Land Use Bylaw notifications cost approximately $300 for two weeks of advertising. If the website could be utilized for Land Use Bylaw notifications, appeal hearings, and other notices, as deemed appropriate, savings could range from $1,000 to $3,000 (annually).”

According to Mountain View Publishing records, the Town of Innisfail was invoiced for $3,510.88 for publication of all legal notifications in 2019.

While Jenkins’ report – which passed first reading on July 18 – appears to make fiscal sense for the Town of Innisfail, the move comes at a time when the newspaper industry across Alberta, Canada and internationally have seen its revenues continue to drop dramatically, initially due to the increasing growth of digital news sources, a protracted struggling economy in Alberta, and now the COVID-19 pandemic.

The move by the town also comes just four months after the Innisfail Province, the town’s sole news and information source for 115 years, closed its doors and merged with The Albertan.

The town’s intentions with the bylaw quickly grabbed the attention of Murray Elliott, the publisher of The Albertan and vice-president of the newspaper’s parent company Great West Newspapers.

“I do appreciate the potential cost savings for the taxpayer during trying economic times, but the timing is bad,” said Elliott, who will be making a presentation to town council at a pubic hearing for the proposed bylaw on Aug. 10. “We, like most businesses, have been hit hard by the pandemic. We’ve had to make tough decisions in response to the rapid decline in advertising revenue – we’ve trimmed staff and combined our papers to cut costs.

“What we haven’t cut, however, is coverage of the Town of Innisfail and area – coverage and distribution that come at quite a cost,” he said, adding the local newspaper is especially important for Innisfail’s senior citizens, who represent one of the largest older demographic for towns of similar size in Alberta. “A free press is anything but free. Municipalities have become a critical source of revenue during these trying times – without it, particularly in Innisfail, our ability to pay for a reporter and staff will be compromised.”

Recently, Elliott made a presentation to Mountain View County on the same issue and council agreed to use its website for public notices but would also continue to use The Albertan for the same notices.

In the meantime, members of Innisfail council have told The Albertan Jenkins’ report does not mean the town will totally abandon the newspaper. Mayor Jim Romane said there is still significant value for the town and its citizens to have their news covered by a newspaper.

“I still think there is a genuine need for print,” said Romane. “I never did think we are doing away with newspaper advertising. That’s not the way I interpreted this.

“I would hate to see our Town of Innisfail page go away,” he added. “I enjoy reading that myself. It keeps me informed of everything.”

For many decades public notification advertising was mandated to appear in local newspapers by the provincial MGA, which governs the operations of all Alberta municipalities. A review of the MGA began under the Progressive Conservative government in 2012. The review was completed by the Notley NDP government and the Modernized Municipal Government Act was passed into law in 2017.

During the review, Alberta’s municipalities successfully lobbied against the objections of Alberta’s newspapers, to remove from the Act their obligation to advertise public notices in newspapers. The new act allows municipalities to use other means of notification, including their websites, if they hold a public hearing and pass an advertising bylaw.

The act states that “Before making a bylaw under subsection (1), council must be satisfied that the method the bylaw would provide for is likely to bring proposed bylaws, resolutions, meetings, public hearings and other things advertised by that method to the attention of substantially all residents in the area to which the bylaw, resolution or other thing relates or in which the meeting or hearing is to be held.”

The Alberta Weekly Newspaper Association (AWNA), a not-for-profit trade association representing more than 100 newspapers across the province and the Northwest Territories, immediately viewed this government initiative as another threat to the beleaguered newspaper industry.

Three years after government passage, with COVID-19 straining every local economy, there is a growing number of municipalities bringing in public notification bylaws, including Innisfail. While the potential revenue loss is increasingly unsettling for the newspaper industry, there is an even greater loss for the public at large, especially in the rural communities, says Dennis Merrell, the AWNA’s executive director.

“When a community loses its newspaper because it no longer can pay its bills, and this is something surveyed in the U.S. where there’s lots of so-called news deserts where communities have lost their newspapers, they found that civic engagement declined in those communities,” said Merrell. “The cost of government increases in those communities because there is no real effective voice that is holding the local town government accountable.

“And cohesiveness in the communities diminishes because there is no real glue that binds the community together,” he added. ”The newspaper is a really important linchpin of a community, and they are under threat.”

The same threat from similar proposed provincial government changes was recently experienced in both Saskatchewan and Manitoba but both those provinces reversed course, largely because of pressure from newspaper publishers, and even small town mayors who argued many rural citizens do not use social media.

“It was not based at all on revenues,” said Steve Nixon, the executive director of the Saskatchewan Weekly Newspaper Association, of the successful fight to maintain municipal print advertising for community newspapers. “Our intent was for the rights of citizens and taxpayers to be properly informed.”