The ladies of the Innisfail legion bid farewell today 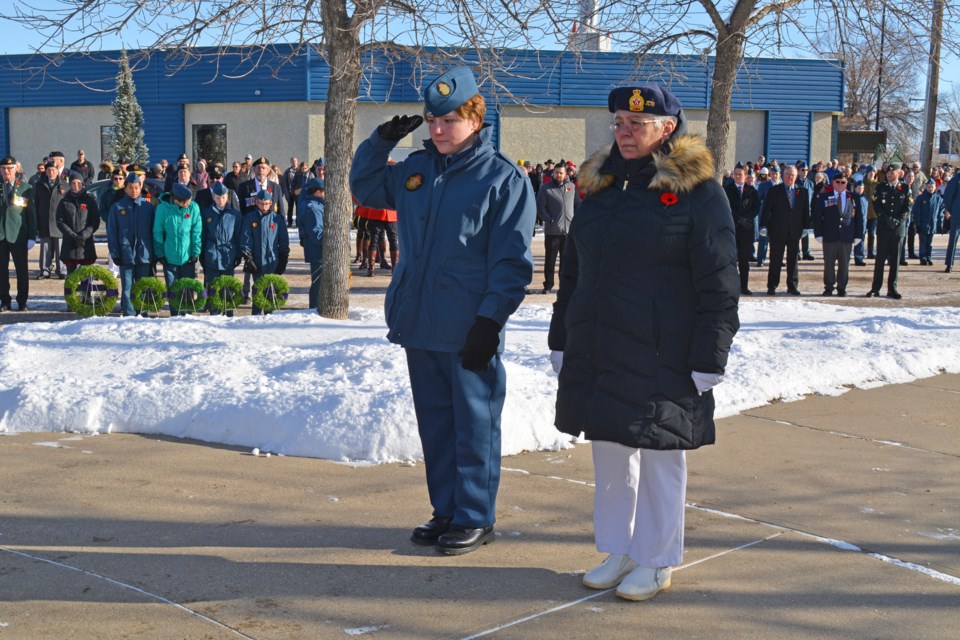 Penny Seabrook, president of the ladies auxiliary with the Innisfail Royal Canadian Legion Branch #104, lays a wreath at this year's Remembrance Day Memorial Service on Nov. 11 The ladies auxiliary is disbanding and giving up its charter as of Nov. 30. Kristine Jean/MVP Staff

INNISFAIL – Like at many legions across the country in recent years, the Innisfail Ladies Auxiliary is shutting down.

The organization that’s been an integral part of the Innisfail Royal Canadian Legion, Branch 104, will officially disband and give up its charter on Nov. 30.

Auxiliary president Penny Seabrook said it was not an easy decision, but one where they had no choice.

“I’ve been president for the past six years. Nobody would step up to take over and I’m tired. Our alternative is to give up our charter,” said Seabrook. “We have 90 paid members, whom we had to send letters to, to explain that we will be giving up our charter due to lack of participation.”

She informed the membership last year of the decision.

“I’ve pleaded. As of last year when we were doing memberships, I said, ladies, without your participation we will have to close down our ladies auxiliary,” explained Seabrook. “If all they want to do is pay their dues and not participate, then what are they getting out of it.”

The Innisfail Ladies Auxiliary first formed in November 1930. It was granted its charter on April 22, 1931. Since then, the organization has participated in several community projects and fundraisers and has provided catering for dinners and banquets in Innisfail and the surrounding area.

Since 2007, the ladies auxiliary has donated more than $90,000 to the Innisfail legion.

“Most of the auxiliary ladies were the wives of serving (military) members or ex-serving members,” said Seabrook, noting many of its members have passed away. “We’ve lost so many of our really dedicated ladies within the last five years.”

Today the average age of members ranges from 70 to 90.

“There’s just a handful of us active members in our 60s,” she added.

This year the ladies auxiliary participated in its very last Remembrance Day service on Nov. 11.

“It makes me very sad,” said Seabrook. “It’s been 89 years. That’s history. I feel really sad that I have to be the one to end it.

“I just can’t keep carrying on and pretending that we’re going to keep being able to do what we’ve been doing. We just can’t,” she added.

Seabrook noted that they are not alone and other ladies auxiliaries have also shut down in recent years.

“In our district over the years we have lost many auxiliaries,” said Seabrook, noting reasons include aging members and a lack of interest.

“The younger generations are so involved in their (own lives). Growing up I was from a family of six kids and we were involved in all kinds of things in the community,“ said Seabrook. “You don’t have families of that size anymore but you also do not see them involved in their communities in the same way.”

The impact of this decision remains to be seen, she said.