Leona Staples honoured with six other women agricultural leaders from across Canada
May 5, 2021 5:00 PM By: Johnnie Bachusky 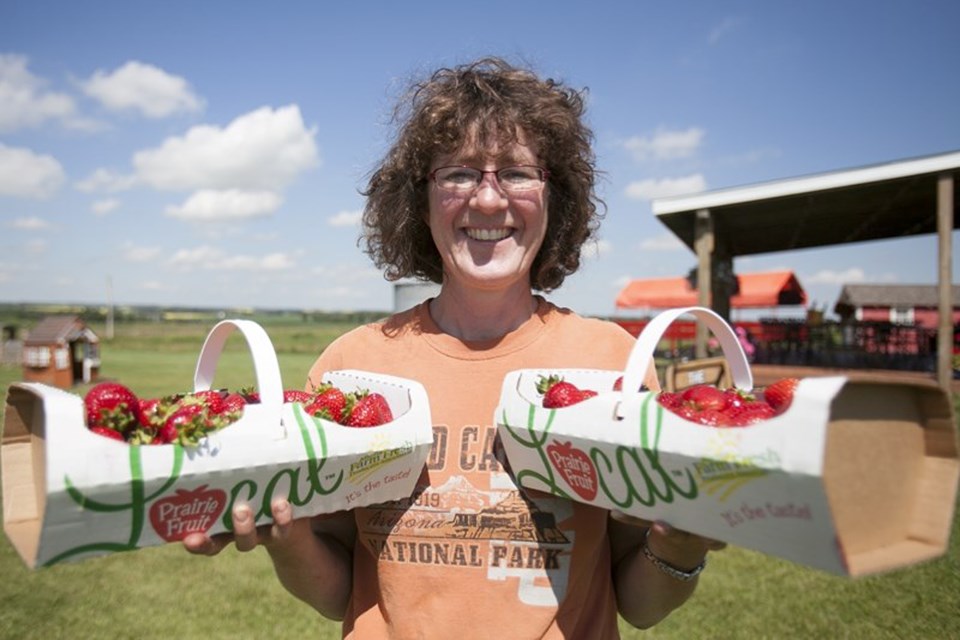 Leona Staples, co-owner of The Jungle Farm, has earned national recognition by being selected with six other women from across Canada for this year's prestigious Influential Women in Canadian Agriculture program. File Photo/MVP Staff

INNISFAIL – It was not long ago when Innisfail banker Susan Patteri came across a nomination form for special women in agriculture, ones who are industry trailblazers and positive and influential leaders for the next generation of women.

Patteri, who is the small business adviser for Innisfail’s Scotiabank, immediately thought of Leona Staples, co-owner of The Jungle Farm, who she’s known for a long time.

“When I looked at the criteria of the nomination process, she was the one person that popped into my mind,” said Patteri. “She is such a leader in agriculture and has such a passion for what she does. I could not think of anyone else who would be more deserving than her.”

Staples was ultimately selected by agricultural publications at Annex Business Media as one of seven women from across Canada for this year’s prestigious Influential Women in Canadian Agriculture (IWCA) program. It was created in 2020 to recognize the important and evolving role of women in agriculture.

All seven winners will be officially honoured through virtual events, including an IWCA podcast series on AgAnnex Talks, which will begin on June 14 and then continue biweekly with each offering their experiences, successes and insight into agriculture.

In October, the IWCA program will have another virtual event that will bring together women from across the industry to share experiences, and offer guidance and advice.

Staples is proud of the recognition but she’s quick to point out her journey to success and recognition began on the farm at home, five kilometres north of Innisfail, that was first settled by her family 124 years ago in 1897.

Her great grandfather immediately named the land The Jungle Farm, a name inspired by the black bear that was living there.

“He named it The Jungle Farm and it has always had that name,” said Staples, who today is a fourth-generation family member who has lived and worked on the farm.

In later years her parents Betty and Gerald Quantz ran the farm. The were equal partners and wonderful role models, said Staples.

“When I watched my mom and dad and what they did together it was a joint effort to build and grow the farm to what they left for me.”

But before she found success on the family farm there was growing up to do. She went to school in Innisfail, was an active member in 4-H and found inspiration from strong women, especially the “incredible” district home economists who worked with Alberta Agriculture.

“They really influenced me to who I was and what I became,” said Staples, adding their influence directed her to educational studies to become a district home economist.  “I could list off forever all these incredible women that I got to work with. They’re passionate about agriculture. They’re are passionate about farm women, and they’re leaders in their communities.”

In 1996, she came back to the farm following the passing of her father. With her husband Blaine they began what The Jungle Farm is now revered for - strawberries, greenhouse crops, potted flowers and an enviable array of field crops.

Relying on her parents cherished influence, and the leadership she experienced and learned from other district home economists, as well as the partnership with her husband Blaine and their three sons, it was an exciting new chapter.

In 2021, The Jungle Farm is a revered institution in Innisfail and area.

“I work with Innisfail Growers and all the incredible women on the four other different farms,” she said, noting Innisfail Growers is a cooperative of five area farms who market their products at farmers markets throughout Central Alberta. “I get to work with and see how they grow their businesses and give back to the community.

"I am really blessed by being surrounded by a lot really incredible women in this whole field of food production.”

With her selection this year alongside six other special influential women from all areas of agriculture, there is little doubt Staples’ inclusion can only serve to be an inspiration for the next generation of women who will be ready to take on their own leadership roles.

“Let’s hope we see more acknowledgement and recognition of that,” said Staples, adding she’s also hoping her national recognition will also inspire everyone who visits The Jungle Farm.

“Our focus is connecting non-agriculture people to the world of food production with our farm and how it is set up. That is always my goal,” she said. “If I can inspire people to eat better because they come to our farm and see how food is grown and see children get joy out of eating a strawberry right out of the patch.

“If that inspires people to be healthier, to eat better and to acknowledge this is where the food comes from, and that is what my job is. To do those things, and to share our farm, and to educate the public.”