Skateboarders ride for their dream skatepark

PENHOLD – It was a great day for Skateboard Day in Penhold. Members and volunteers with the Penhold Optimist Skatepark Committee held a fundraiser at Penhold Crossing Secondary School on June 1.
Jun 13, 2019 9:45 AM By: Kristine Jean 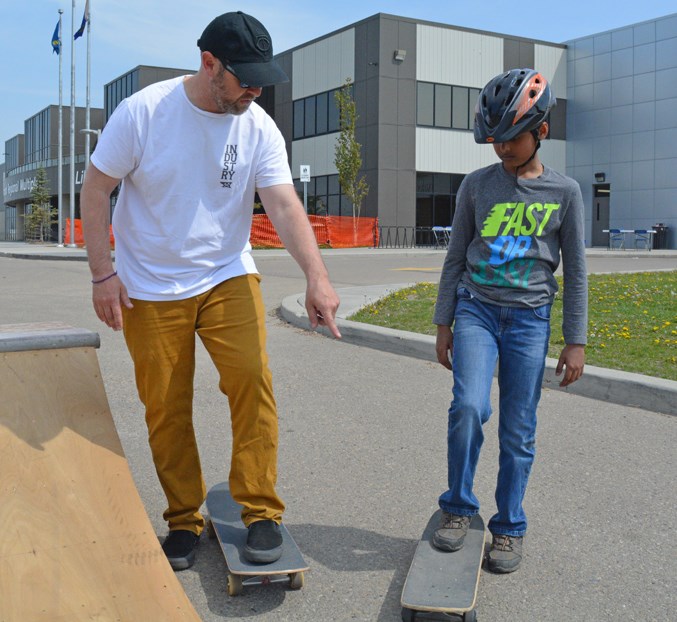 PENHOLD – It was a great day for Skateboard Day in Penhold.

Members and volunteers with the Penhold Optimist Skatepark Committee held a fundraiser at Penhold Crossing Secondary School on June 1.

The free event included a skateboard, bike and scooter-a-thon, skateboarding demonstrations, lessons and a barbecue.

All money raised is going to the Penhold Optimist Skatepark project.

"We asked kids at the schools to get sponsors to challenge them on how many times they can go around the bus loop," said Brenda Mahoney, skatepark chair. "We do want to have our skatepark completed in the next few years.”

Joining the committee on June 1 was Industry Skate and Snow from Red Deer and the Central Alberta Skateboard Association (CASA), who were on hand providing demonstrations and safety tips on skateboarding.

"They will be teaching kids how to ride a skateboard, what the benefits are and how great it is," said Mahoney, noting kids and families were out from Penhold, Red Deer, Innisfail and surrounding communities. "They want to come and have a great time, help us and support us to get this skatepark done."

Mahoney noted the progress on Penhold's skatepark is slow but steady.

"It's just (raising) the money so that we can apply for the matching grants. We're over a third of the way there," she said, noting the target of $300,000.

Tyson Shewchuk, 20, of Penhold is an avid skateboarder who was out supporting the fundraiser. He is looking forward to Penhold getting its own skatepark one day soon.

"I definitely think it's a good place (for kids) to get together," said Shewchuk. "Skateboarding has taught me a lot of discipline and commitment, so having a skatepark here would be (great for kids) to go and learn new things.

"It would be a really good thing for the community," he added.

Paul Peters, with CASA, said the organization began about three years ago and advocates for more opportunities for kids to skateboard and provides programming at schools and in the community.

"It would be nice to see a skateboard park for those kids that maybe don't play hockey or organized sports or can't afford them," said Peters. "It's nice for the kids at the schools to have something to do too. It's a really accessible sport."