Silent no longer Part 2: Seizing light from the dark side 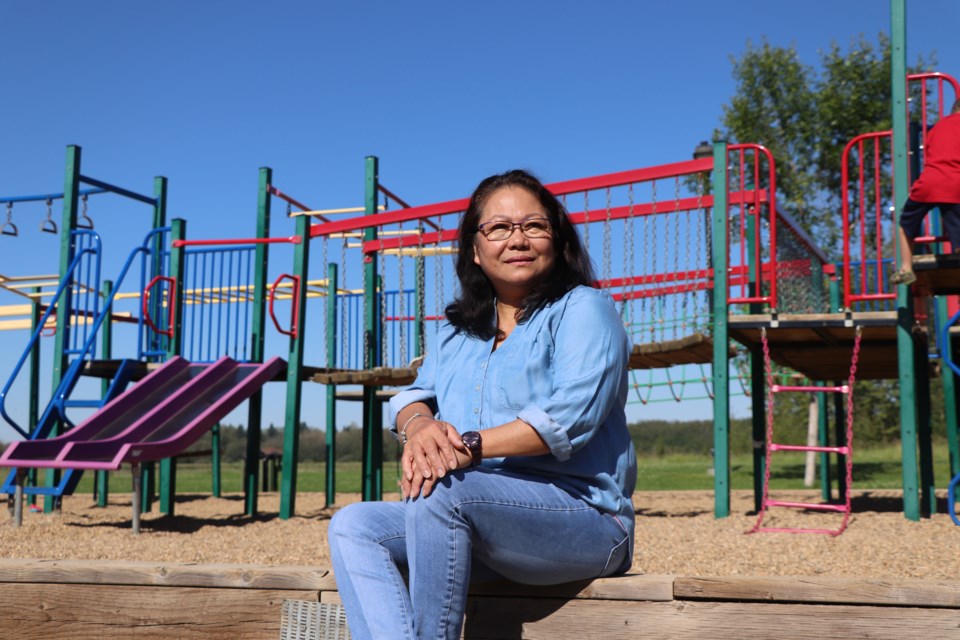 Since arriving to Innisfail from the Philippines in 2007, Grace Gresos has repeatedly felt the sting of racism, but her deep faith has been her anchor to overcome all obstacles. Johnnie Bachusky/MVP Staff

INNISFAIL — It has been a long arduous road for Grace Gresos to find acceptance and respect in her adopted town.

But her journey is the ultimate immigrant success story — her life today is bountiful, joyous and free. But the road to get there was lined with obstacles, hurdles overcome only through her deeply rooted Roman Catholic faith and rock solid love and commitment for her family.

Gresos came to Innisfail from the Philippines in 2007. She was then 45 years old and away from her family, but determined to work hard with a goal of establishing a new home and earning enough money to help send three sons to college. In the meantime, it would take three more years before her family could join her in Canada.

Gresos arrived under a foreign worker contract. She would have few if any rights. She had to work hard and be totally obedient to all laws, rules and regulations. One wrong move, even an incorrect word to an unsympathetic person, could trigger a quick exit back to the Philippines — a beautiful country for sure, but one lacking opportunities and the freedoms many Canadians take for granted.

“The problem in the Philippines is too much politics, and they don’t really focus on the problem,” said Gresos. “All the issues are still there, the poverty and everything. There is too much corruption.”

But in Canada, she encountered a new problem while trying to do everything possible to move forward, one day at a time, one step at a time. She was, after all, different. She was a brown-coloured person speaking fractured English in a small rural Alberta town where conservative values are paramount. Most folks are good, accepting. But a few are not and will look at foreigners with suspicion, sometimes answering their doubts with a sting.

For the first three and a half years in Canada, as long as she was classified as just a foreign worker, Gresos decided she must take everything any nasty person threw at her, including bullying. However, she always focused on the plan: work hard for her family, and not to compete or argue. The needs and love for her family always came first.

For the first 10 years, she worked at Innisfail’s A&W restaurant. It was all new to her — the country, town, culture and people. She worked hard, but sometimes there were nasty encounters with disrespectful customers.

“Especially if your colour is brown,” she said. “I know sometimes people will joke, but it is not a joke to me.”

One time, a customer suggested to her to have one husband in Canada and another in the Philippines, while another scolded her for either not understanding her or the English language. There were others who accused local Filipinos of stealing jobs.

“Sometimes, I was scared to answer back, but I was very lucky as sometimes the kids and the owner helped me a lot,” she said, saluting her former boss Scott Johnson. “He always stood up for me. He was the one who would tell a customer he could leave. He always stood up for us Filipinos. That’s how we survived. Somebody was standing up for us.”

But the problems were not just limited to the few nasty customers at the A&W.

While she was working at her second job at a local hotel, a few male customers, claiming their room keys were not working, offered her money as it was their bizarre belief she was a prostitute.

“I told them, what is this money for? They would say, ‘you know what I mean’. I said, ‘no, you want to get in your room or I will call the police.’

“I survived because I just let this slide and let this go and kept praying to the Lord to give me more strength to handle all this,” she said, again relying on her deep Catholic faith for strength and perserverence. “I hold on to my faith you know — as along as they don’t touch me, I am okay.”

But there were better days to come for Gresos. Three and a half years after first arriving, she would no longer have to live under the insecurity of a foreign worker contract. Her faith was rewarded when she was granted her Canadian residency status, which gave her more rights as well as the freedom to assert herself without unfair consequences.

“I am not going to worry anymore about my papers. You have to swallow everything. I could now do the things I want to do. I could live freely and express myself,” said Gresos.

At about that time in 2010, her husband Arsenio and three sons — Lorenzo, Mark and Paul — joined her in Innisfail. She became active in the Phil-Can Neighbourhood Association of Innisfail, a group that now represents about 50 Filipino citizens in the community. The association regularly holds fundraisers for the town, and offers Filipino foods to annual Canada Day celebrations. It’s their way of giving back to the many good citizens who stepped up to help, notably Norma and Bill Hoppins, who gathered essentials for arriving Filipinos.

Gresos now has a new job at the local hospital. Best of all for her and the family, the dream home Gresos had long sought for her family became a reality.

However, that too came with a sting — a suggestion from a few that it was not deserved as it was somehow unthinkable they could have good credit to qualify.

“I know God knows how I got this house,” said Gresos with a hearty chuckle.

There is a new chapter to Gresos’ life. She wants to share her story and offer her experience to the community. She is a member of the town’s rejuvenated Welcoming & Inclusive Community Committee that is addressing racism in the community. She hopes the committee’s work will go a long way to create better understanding in the community that all new citizens deserve respect, not just Filipinos.

“Just treat all of us fair and respect us. We are not stealing your jobs. We just want to earn a living. We are working for our daily consumption too,” she said, adding she’s hopeful because of her firm belief that it’s always better to seek the good side of all people, and never the dark side.

“They are pulling you out if you are looking at the dark side,” she said. “We only want respect.”