INNISFAIL – Health-care workers for local seniors took their message to the streets this weekend.
May 14, 2019 10:45 AM By: Kristine Jean 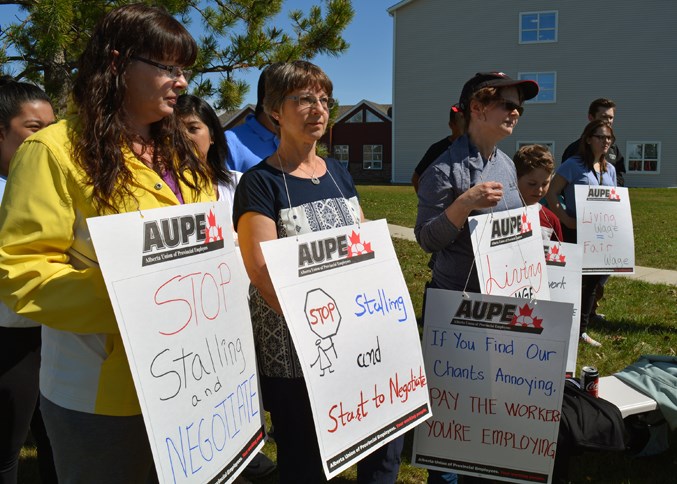 Innisfail’s AUPE health-care workers listen to union representatives and speakers during a community rally on Sunday (May 12) outside Sunset Manor in Innisfail.

INNISFAIL –  Health-care workers for local seniors took their message to the streets this weekend.

Innisfail’s AUPE (Alberta Union of Provincial Employees) seniors-care members from Sunset Manor and Innisfail Country Manor held a rally Sunday, (May 12) to highlight the need for better wages, improved working conditions and benefits, and the need for a better supportive and independent living system for the town's seniors.

“(We’re here) just to make the community more informed about what is happening within one of the facilities within their community,” said Karen Weiers, AUPE vice-president.

Repeated calls to senior officials at Chantelle Management, the owners and operators of both Innisfail facilities, were not immediately returned,

Staff at Sunset Manor and Innisfail Country Manor have been trying to work out a new collective agreement with their employer, Chantelle Management, noted Weiers.

About 125 workers, including licensed practical nurses (LPNs), health-care aides (or personal support workers -- PSWs), servers, cooks and housekeeping staff have been affected by the ongoing negotiations.

“These front-line workers have been in negotiations for over a year trying to get a contract renewed,” said Weiers, noting offers in the past several months have not reflected any significant changes for the better. “The employer is not recognizing the hard, dedicated work that they actually do.”

Weiers noted the support at the rally on May 12, including workers, many of whom wore signs that spoke of staff’s concerns.

“One of the main concerns is the respect that (management) have for these workers,” said Weiers. “The employer is not bringing any form of compensation or renewed compensation to the bargaining table.

These workers have not seen an increase (in pay) since 2015. That’s quite a while back and that is a huge concern.”

“These facilities as well, are publicly funded with compensation similar to what all AHS (Alberta Health Services) facilities are funded with, but these workers are getting paid a lot less so the compensation that they receive is a lot less. The rest of that money goes to profit for Chantelle,” explained Weiers.

“It should always be the people and the residency care that should (have) the advantage of that publicly funded money,” she added, noting workers make a significant amount less than what they are seeking.

“It can be anywhere from two dollars to four dollars an hour less than what other people, doing the same work, are compensated within central region,” said Weiers. “They deserve the respect, the dignity and the compensation that others have for the work they do.”

Supporters at the May 12 rally heard from speakers, including Edith Pasco, vice chair of Local 48, chapter 22 in Innisfail.

“As a health-care aide, I see every day the hard work my fellow members put into their jobs and I see the care they have for our residents,” said Pasco.

“Now through the support of you, our neighbours, our families and our other co-workers across Central Alberta, we’re confident we can make our message to Chantelle Management loud and clear. In our town we put people first before profit,” Pasco concluded.