Rowley once again holds off the ghosts

Pandemic hurts with Pizza Night shut down but guests from all over still come
Sep 12, 2020 5:00 PM By: Johnnie Bachusky 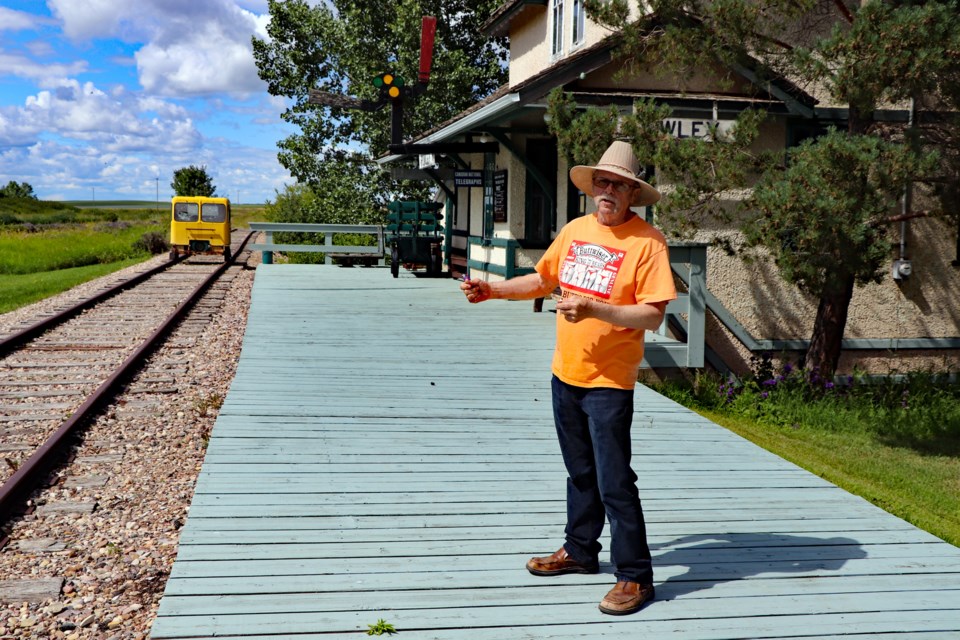 Doug Hampton, the caretaker of Rowley, at the ghost town's train museum. Although Pizza Night has been shut down due to the COVID-19 pandemic, he is confident the revered tourist destination will soon be back to normal. Johnnie Bachusky/MVP Staff

ROWLEY – For seven decades Doug Hampton has seen the very worst dark phantoms of doom and despair hovering over his town.

“We are not dead yet,” declared the 69-year-old retired oilfield worker, who is the ghost town’s caretaker, as well as treasurer of the local community association. “If we need to, we’ll change over to whiskey and kill the virus.”

Hampton has seen his beloved little ghost town, 34 kms north of Drumheller and 108 kms east of Olds, go through plenty of hardships before but always finding a way to bounce back.

A lifelong resident, he saw Rowley hit rock bottom in the mid-1970s. The town, which once had classic pioneer hopes and dreams with a peak population of around 500 a half century earlier, had dwindled to just a few dozen diehard souls due to the lure of big city life and its isolated Central Alberta location.

Since then, however, locals dug deep with grit and determination to ensure there is long-term survival for their beloved pioneer town. It was almost half a century ago when a group of good ole boys armed with plenty of beer and whisky staged their now legendary B & E Party at the hamlet’s boarded-up old saloon that changed Rowley’s fortunes, from a soon-to-be-forgotten prairie locale facing oblivion to one of Alberta’s most revered tourist attractions.

It took diehard locals copious amounts of hard work and perseverance to push past every piece of unforeseen bad luck, like the cancellation of the tourist train service in 1997. But locals always found a way to keep their town alive.

That attitude was carried into 2020 when COVID-19 arrived in late winter and forced locals to temporarily shut down their immensely successful Pizza Night since last February.

Pizza Night, which was first held about 15 years ago, is Rowley’s most important and profitable fundraising event, providing monies needed for ongoing maintenance and restoration projects.

The event is held the last Saturday of each month and attracts hundreds and hundreds of faithful from across the province, who come for pizza and to dance to fine country music at Sam’s Saloon.

“It is definitely an adjustment. We don’t come every month but we do come consistently once or twice a year. It is part of our routine that is really missing this year,” said Cochrane's Dan Overes, a Pizza Night fan who visited Rowley on July 25 with his wife Emily.

He was surprised to see so many people and cars at the rejuvenated ghost town to view the many preserved pioneer buildings, which include the restored train museum and country grain elevators. “It’s still good to see there is an attraction to the community that extends beyond just pizza and beer.”

Even with the pandemic still an unpleasant reality, Hampton dutifully does his chores around town to keep it looking in tip-top shape. He mows all the green spaces and ensures all the historic buildings look suitably rustic, and well maintained.

Hampton enjoys welcoming visitors, many coming from other provinces who have seen the many nationally televised documentaries that have depicted this once near dead hamlet as the little Alberta prairie town that refuses to die.

“You got to do what you got to do if you want to keep the place running,” Hampton told CBC Radio-Canada journalist Vincent Bonnay on July 25 for an upcoming French language television news feature story.

“With this COVID we talked about a drive-thru Pizza Night but I don’t think we are set up for it. We don’t have the plexiglass screens. You’re still handling money. It’s just not feasible for us and we would need more people to run a night like that.”

Although Pizza Night is the hamlet’s big money maker to keep Rowley operating as a tourist town, he said the local community association has enough saved to keep it going, at least for the short-term. Desperation has not hit Rowley yet.

As always, Hampton, in the longstanding Rowley pioneer spirit, is hopeful for the future.

“I am sure once they find an inoculation for this COVID thing we will get back to normal. There will be some big pizza nights,” he said. “We get a lot of people asking, ‘when is your next Pizza Night?’ Well, we’re not sure. These are people from out from the cities who want to come and camp for the weekend, eat pizza and drink beer with us.

“And that is what keeps the town going,” concluded Hampton, acknowledging it will take more than a pandemic to kill Rowley. “I hope so. Unless the pandemic kills us. But so far we are doing pretty good.”