Rolling out kits of love for the elderly 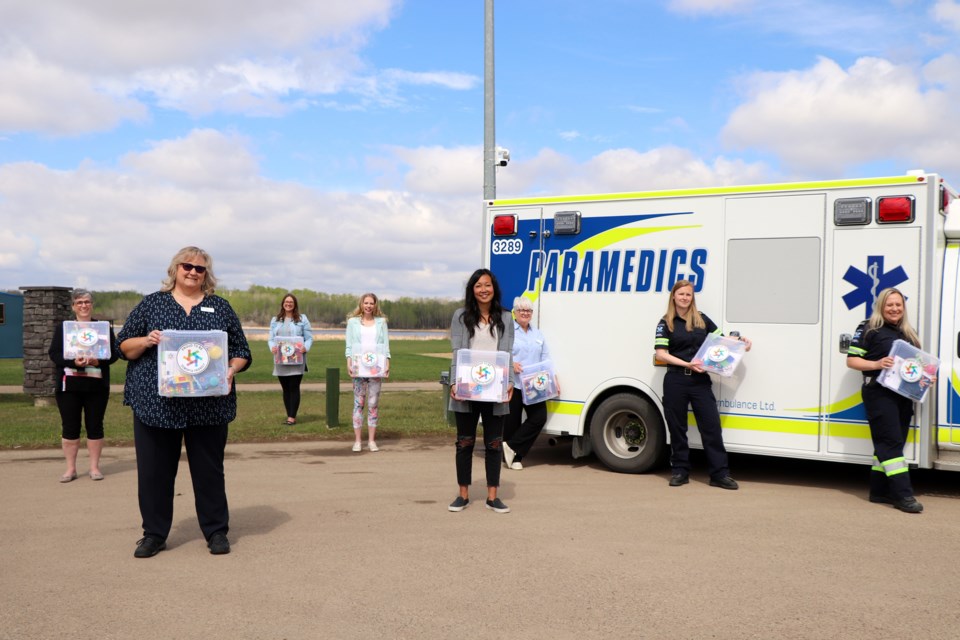 Members of the Innisfail Dementia Friendly Community Initiative, along with local volunteers and paramedics from Medavie Health Services West, gather at Centennial Park to celebrate a unique partnership with the ambulance service. Medavie ambulances are being provided with Dementia Friendly Resource Kits to assist them whenever they are transporting citizens afflicted with any level of dementia. Johnnie Bachusky/MVP Staff

INNISFAIL – Citizens afflicted with any level of dementia and requiring ambulance service have been given a gift from the heart.

The gift is 10 Dementia Friendly Resource Kits from the Community Partners in Action, whose members are town and FCSS officials, local seniors advocates and healthcare representatives. They spearheaded the recent formation of Innisfail’s Dementia Friendly Community Initiative.

The resource kits were donated on May 19 to Medavie Health Services West, the ambulance service responsible for Innisfail.

“I feel the need for a dementia friendly ambulance came with the awareness that people affected by dementia are increasing and those who have been diagnosed are getting even worse,” said Jennifer Wood, the dementia friendly community coordinator in Innisfail.

“I also felt the importance to meet the needs of people living with dementia and make some small changes in the internal of the ambulances. The kits are on each dementia friendly ambulance and it’s a toolkit for the ambulance staff.”

Wood said the inspiration for the project came when she found a video last fall about a program in the United Kingdom from the University of Northampton research centre. They used twiddlemuffs to sooth anxiety levels for citizens afflicted with dementia and partnered with their local ambulance service to make it more dementia friendly.

A twiddlemuff is a double-thick tube made of fur or other warm material with bits and pieces created for the ambulances. They'reare proven to help calm and distract dementia afflicted residents.

“I just thought it was a real neat idea and it just reminded me that sometimes it’s not just the big things that make a difference in people’s lives but maybe the more subtle adjustments and small tweaks that intuitively can make a big impact for a person living with dementia,” said Wood.

Last March she reached out to John Barry, the general manager for Medavie’s central zone, and laid out a plan on what she wanted to do in Innisfail.

“We all agreed this would be something that would be very beneficial to our community and we just went from there, and then our Community Partners in Action group recruited volunteers from the community to help put together the twiddlemuffs and sensory squares,” said Wood.

And many were found, despite the arrival of the COVID-19 pandemic and every obstacle that came with it, including social distancing rules and limits on group gatherings. Volunteers contacted Wood through Facebook, saying they wanted to be part of the unique project, which is believed to be the first of its kind in Alberta.

“When an ambulance does pick up someone with dementia it will hopefully help sooth them,” said Tasha, who made eight sensory squares. “It was a very easy thing to volunteer for. I had materials in the house. They gave great instructions, and we’re glad that they can go back into the community.”

The creations by the volunteers are included in the kits, which are for one-time use only and can cost organizations up to $18. Along with the twiddlemuffs and sensory squares they include a 12 in. by 12 in. storage case, a plastic clipboard, textured squishy balls, pencils and crayons and magic cube.

Officials with Medavie Health Services West said they were both supportive and excited by the resource kits. They see them as an opportunity to meet some needs that staff had not previously paid full attention to.

“There have been times when we’ve had challenges transporting people with dementia, and these are people that probably were in the later stages where confusion and restlessness and anxiety are taking more of the forefront,” said Kenn Eglauer, an operations superintendent for Medavie’s Wetaskiwin office.

“At one point we might have looked at dementia patients as maybe just restless and not really realize there was something else there as far as part of the disease process.

“This would give us another thing to be able to provide as we transport them, or the plan is to leave it with them so they would have to even use at home or in their own vehicles.”

Both Eglauer and Barry said it’s hoped the resource kit initiative will be expanded to their ambulance services in Ponoka and Wetaskiwin.

As Innisfail’s dementia friendly initiative continues into the fall, Wood said the resource kit program for ambulances would be monitored and studied.

“Everything we try to put out or to address with the dementia friendly initiative we always view through a lens of sustainability. This is something we believe can continue on after our grant is done,” she said.

We value our ambulances and our collaborations, so we will be back and forth with each other to evaluate what people in the community have felt about the Dementia Friendly Resource Kit, and also how the ambulance feels the kits went.”

For more information on the resource kits and Innisfail’s Dementia Friendly Initiative go to the Facebook page.