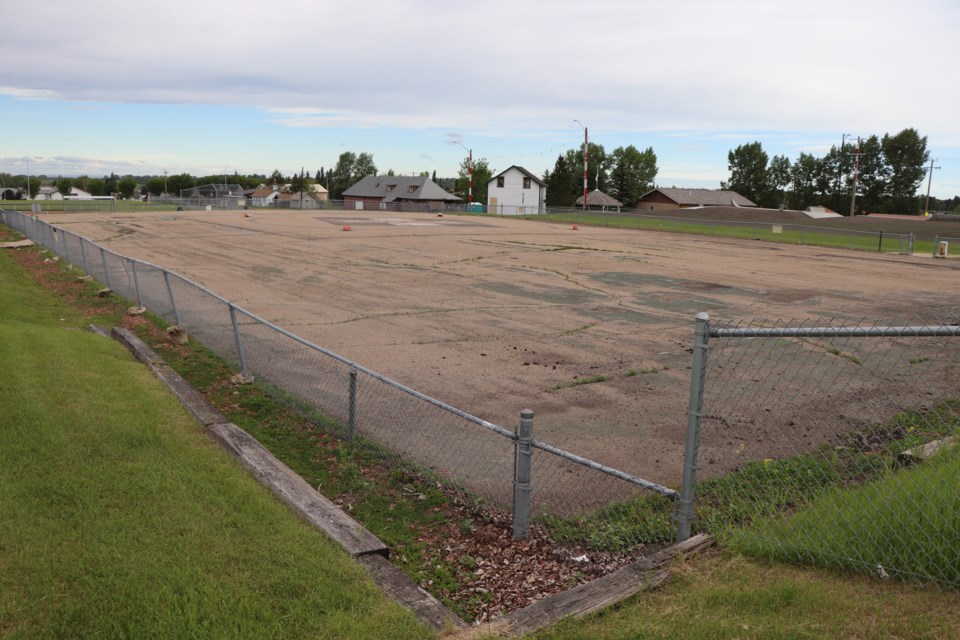 The town's heliport operations by the hospital have been suspended for up to a year for the town to decide whether it wants to spend $250,000 to be compliant with Transport Canada regulations. Air ambulance services are being moved outside of town at Big Bend Airport. Johnnie Bachusky/MVP Staff

INNISFAIL – Senior town officials will soon be ready to conduct a thorough review to determine the future site for a local heliport.

The Innisfail Hospital Heliport, the local air medical service transportation site for the past 22 years, was suspended in June and no longer available for use by STARS or AHS Air ambulance.

There is a possibility the hospital site will never again be used to transport patients by air.

“We will be looking into it this fall. There are a lot of factors that have to be considered,” said mayor Jim Romane. “It’s really a case where the community will have to decide whether to invest up to $300,000 into the property. Is it worth it?”

The suspension, which could last up to a year, was voluntarily made on June 18; one day after the municipality submitted a request to Transport Canada for voluntary surrender of the heliport operations certificate.

The move by town council followed a risk assessment that showed the site, which was created through a Rotary Club of Innisfail project in 1998, needed more than $250,000 worth of upgrades to achieve compliance with Transport Canada guidelines.

In a report to council at its regular meeting on June 22, Meghan Jenkins, the town’s manager of community planning and sustainability, said the suspension is intended to eliminate current town liability related to non-compliance issues, as well as to give the municipality time to think over whether it wants to continue with air ambulance services at the current site. Jenkins noted in her report that the heliport is in a high traffic, built up area presenting long-term operational and safety challenges, even if all of the necessary upgrades are made.

In the meantime, patient transfers for the town will be based at Big Bend Airport, located 10 kilometres northwest of Innisfail.

“I knew this was coming. I looked at the site last year and I said, ‘We’ve got to do something with this,” said Romane, noting conditions have changed since 1998, and the site might no longer be appropriate. He noted the current flight path has helicopters coming in at less than 100 feet over a ball diamond.

“If there is a baseball tournament on and a helicopter comes in, those people are going to get blasted out of the ball park,” said Romane, adding the new skatepark presents another worrisome issue.

“The kids at the skatepark will be rushing over to watch the helicopter come in and will scare the pilots on whether they will climb over the fence. There are a lot of things we are looking at.”

Romane also noted that along with considering the estimated $250,000 cost to meet Transport Canada standards, the town is also responsible for providing personnel on the ground to support incoming helicopters. That includes the deployment of local firefighters to stabilize the area for every call, a cost the town will have to cover.

“Under current regulations, when aircraft land at the heliport we are required to have emergency staff on the ground for pedestrian and traffic control,” said Romane, adding air medical service at Big Bend Airport, even if based 10 kilometres out of town, is likely to operate far more smoothly and efficiently, and without the personnel or bureaucratic challenges it faces at the current site.

“You haven’t really lost a lot of time. At the very most, there might be a five minute difference,” said Romane, adding response times at Big Bend Airport will be monitored.

He said if all things go well at the rural heliport, the town could decide to make the move permanent.

“I think so. We have a year to work with on the existing location on the practicality of having it there,” said Romane.