The invasive species can cause serious issues for native fish
Oct 29, 2020 5:00 PM By: Johnnie Bachusky 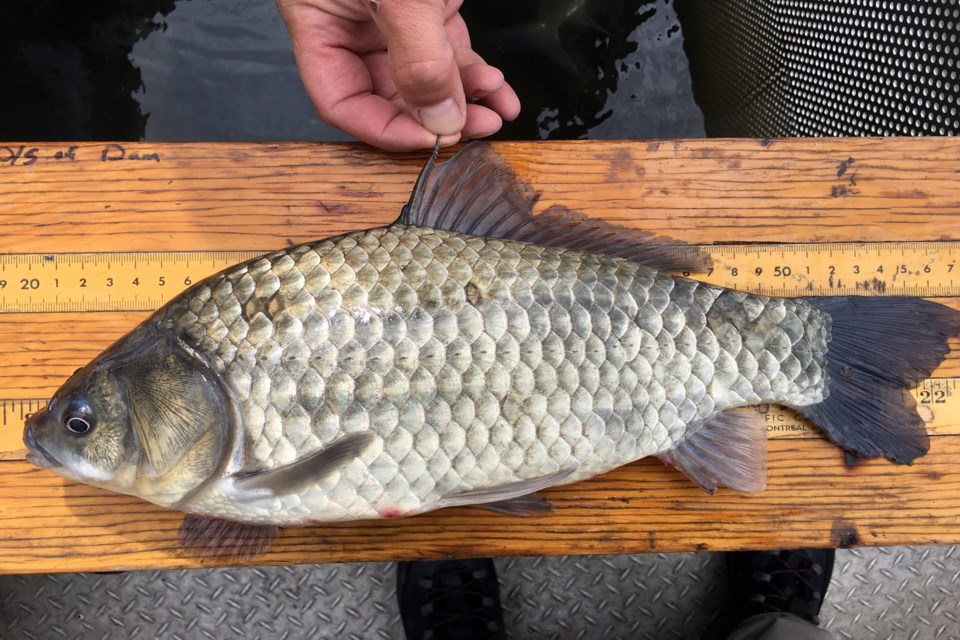 A Prussian carp is an invasive fish species in Alberta once thought to be a type of goldfish. They are now appearing in Innisfail's Dodd's Lake. Photo by Alberta Environment and Parks

INNISFAIL – Dodd’s Lake is being invaded by Prussian Carp, a freshwater genetic cousin to the Asian goldfish that needs no male partner to reproduce.

The plump silvery fish actually clones itself through a process called gynogenesis. They literally steal sperm from other species to reproduce themselves over and over and over again.

First discovered in the province in the early 2000s, Alberta is the first jurisdiction in North America to have found Prussian carp in natural waterways. They are now present in Saskatchewan waterways.

Prussian carp were initially dismissed as goldfish but through DNA analysis provincial fish experts were able to confirm they were actually a separate species.

The invasive species are now firmly entrenched in Dodd’s Lake, a body of water never known to have meaninful stocks of native fish. There have been a half dozen reports this year of sitings of Prussian carp, measuring about a foot long and weighing about a pound. They have also been found north in waterways around Lacombe, and as far south in the watershed areas of the Bow and Oldman rivers.

There is growing concern with this invasive species becoming a serious threat to local aquatic ecosystems and native fish habitats. They are considered opportunistic voracious eaters that will feed on just about anything, including smaller fish. This big appetite raises the risk they will ultimately out-compete native fish for food sources and put their survival in jeopardy.

Furthermore, Prussian carp also multiply rapidly, spawning up to three times a year. They can also survive in just about any body of fresh water, even poorer quality ones like dugouts and drainage ditches.

“They seem to be quite resilient,” said Meghan Jenkins, the town’s manager of community planning and sustainability, who is the lead town official overseeing the Dodd’s Lake Area Community Recreation Plan, a planning process for the lake’s recreational future.

She said the town will be posting signage next year as part of the plan to advise citizens of best practices whenever they come across Prussian carp at Dodd’s Lake.

Mostly, however, the town is letting the experts at Alberta Environment and Parks decide on what course of action should be taken at Dodd’s Lake. Nicole Kimmel, aquatic invasive species specialist with Alberta Environment and Parks, said her department is not recommending any response to the Prussian carp at Dodd’s Lake, noting that while they are considered an invasive species of concern they are not on the prohibited list under provincial fisheries legislation.

“If this was an isolated pond and the only occurrence for miles and miles then we might be looking at some response effort,” she said.

Kimmel said they could be removed but because Dodd’s Lake is surrounded by Buffalo and Waskasoo creeks the fish could still get in through flooding events or water transfers. That scenario is the possible reason of how Prussian carp first arrived locally, as there no other natural bodies of water flowing into Dodd’s Lake.

“All it takes is for one to be introduced and if there is sperm from other fish they can quickly reproduce,” she said.

In the meantime, there are citizens who are developing a “bit of a taste” for Prussian carp. Kimmel said there is nothing wrong with taking them home for consumption.

“I haven’t personally consumed them but I have heard anecdotally they are quite boney but some folks have developed a kind of a taste for them and they do quite well,” she said.

But if anglers do not want to bring home the Prussian carp to consume Kimmel said it’s important for anyone catching the fish to immediately kill it and dispose of the remains appropriately, such as in a landfill, and not near the shorelines of a body of water.

It is also important to remember that senior levels of government take the issue of releasing live fish into provincial rivers and lakes seriously. Fines can be up to $100,000 or a year in prison.

Chinook's Edge teachers, staff feeling COVID pressures
Nov 21, 2020 12:00 PM
Comments
We welcome your feedback and encourage you to share your thoughts. We ask that you be respectful of others and their points of view, refrain from personal attacks and stay on topic. To learn about our commenting policies and how we moderate, please read our Community Guidelines.