PENHOLD – For now Penholders will have limited choice for cannabis in their community.
Dec 4, 2018 9:45 AM By: Kristine Jean 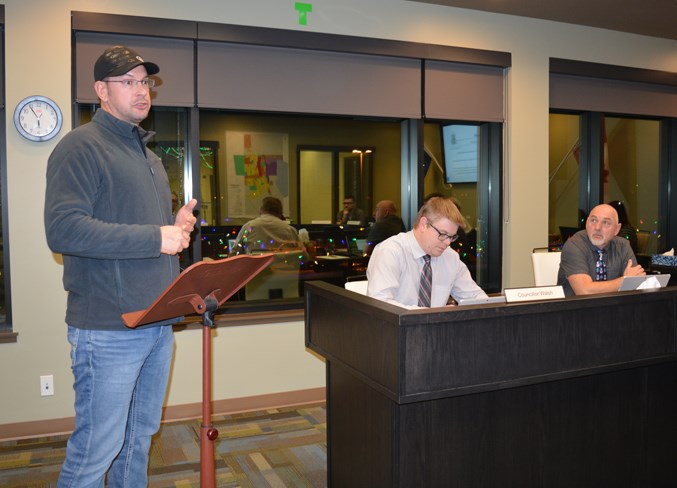 PENHOLD –  For now Penholders will have limited choice for cannabis in their community.

Council recently voted 4-3 in favour of implementing a 300-metre setback between cannabis retail stores, and that means the community will for now have to settle for no more than one outlet due to the community's limited commercial space.

"There was concern about an over saturation of cannabis stores in our very limited commercial space,” said Penhold mayor Mike Yargeau, who voted against the approved 300-metre setback. “Our original intent of the request was to limit the number of retail (cannabis) businesses we had in town. There’s got to be a fine line between limiting and only allowing one (store) because there’s an argument that it’s not fair.

“Alberta Health Services (AHS) recommends 300 metres and that works great in the City of Red Deer because they have a lot of options. We don’t have that here. I would say 300 metres is excessive,” added Yargeau.

He did note there is now commercial space and future opportunities with the newly annexed land from Red Deer County.

On Nov. 26, the town held a public hearing on amendments to the Land Use Bylaw regarding distance between cannabis stores. Council also heard from two developers in the cannabis industry that spoke for and against implementing the AHS's recommended 300-metre setback.

Coun. Sharolyn Sanchez agreed with the mayor the 300-metre setback was excessive, adding they cannot compare themselves to nearby municipalities.

Kristina Schmidt, the town's planner and development officer, provided council with details of the new amendments, along with other setback proposals, including 30, 50 and 100 metres.

Coun. Tyrone Muller said Penhold is unique with regards to its limited commercial space and that a cautious approach to retail cannabis should be made.

“I don’t know if our community is ready yet, to have one, let alone two or potentially three cannabis stores,” said Mueller.

Coun. Ken Denson said one cannabis store was enough and the approved setbacks "should reflect that.”

Mike Sawicki of Cannabliss, the town's lone retail cannabis store owner who was approved by the town in October, agreed with the recommended distance.

“I think 300 metres is a fair number. That will give an opportunity for both businesses to succeed, if and when that does happen,” said Sawicki, whose store is located in the Hawkridge Market Square.

However, that distance is not sitting well with another local developer, who was told by town officials last October to hold off on seeking a permit until the setback issue was resolved.

“I believe it’s not the right approach, to put in a setback of 300 metres,” said Ron Goss, who attempted to open up a local business with his Weed Kings cannabis store.

“If you don’t want competition this is the best way to limit competition. You legislate no competition,” he added, noting Weed Kings has been approved to open stores (pending Alberta Gaming, Liquor and Cannabis commission approval) in Sylvan Lake and Red Deer.

Coun. Mike Walsh inquired about other municipalities in Central Alberta and their setbacks.

“I don’t think Hawkridge Market Square should have more than one cannabis store,” said Walsh. “Three hundred metres may be too restrictive and the capitalist side of me doesn’t want to restrict (businesses). I don't think that's our goal."

Yargeau and councillors Muller and Sanchez voted against the motion, with councillors Walsh, Denson, Shaun Kranenborg and Shawn Hamm voting in favour of the 300-metre setback.