Orangemen from Prairies gather in Innisfail

The western chapter of the Orange Lodge of Canada recently gathered in Innisfail for its annual general meeting. Orangemen from across the Prairies attended the event on April 16.
May 17, 2016 1:00 AM By: Kristine Jean 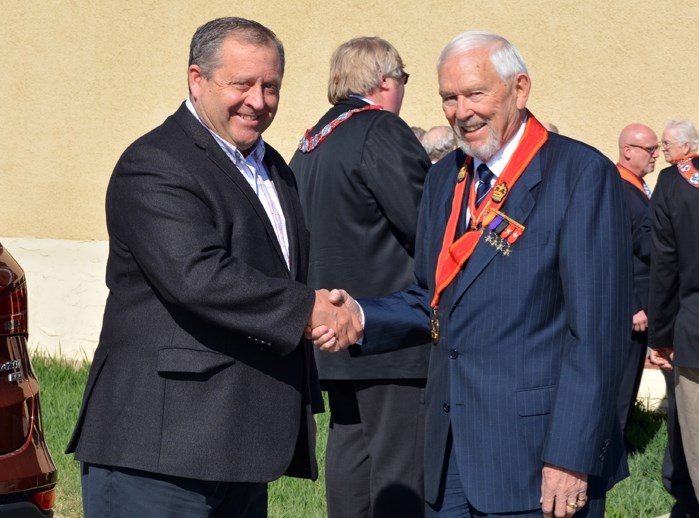 Innisfail mayor Brian Spiller greets William Johnston, most worshipful brother, past grand master of the Orange Lodge of Canada during the Orange Lodge annual general meeting in Innisfail on April 16. Spiller was invited to a wreath laying at the cenotaph.

The western chapter of the Orange Lodge of Canada recently gathered in Innisfail for its annual general meeting.

Orangemen from across the Prairies attended the event on April 16.

“We have an annual meeting of the right worshipful grand lodge, which is the four western provinces,” said William Johnston, most worshipful brother, past grand master and sovereign of the Grand Orange Lodge of Canada. “We meet once a year in April and this is the first time we've been in Innisfail.”

Johnston, a member of the Orange Lodge in Innisfail, was joined by about 30 to 40 members who all took part in the annual meeting that included a short memorial service.

Members marched to the Innisfail cenotaph led by a piper, where the group laid a wreath to remember the Orangemen who fought and died in the two world wars. The service also included the reading of Psalm 23 and a moment of silence. It was followed by a luncheon at noon and the annual banquet later that evening at the Innisfail Royal Canadian Legion.

“It was to commemorate the Orangemen who died in two world wars. There was about 10,000 of them,” said Johnston, noting the Orange Hall in Innisfail has been here since about 1924.

At one time there were 150 Orange lodges in Alberta. Today Innisfail's Orange Lodge is only one of three remaining in the province. Edmonton and Calgary have the other two.

The local lodge recently became dormant for about two months, noted Johnston, adding he decided to spearhead a project to revitalize the group.

“We're starting up a new lodge here,” he said. “As soon as we get the details worked out, I will get a warrant from headquarters in Toronto and we'll be on our way,” he added, noting the important role the Orange Lodge has in Innisfail and in communities across the country.

“The Orange Lodge is a Christian, Protestant fraternal organization. We support charities and uphold the Protestant faith,” explained Johnston. “We're very loyal to the Crown -- to the Queen, to God and country.”

For Johnston, being a member of the Orange Lodge is a family tradition that dates back centuries, and is one he continues today he said, noting that Orangewomen also have their own group called LOBA – Loyal Orange Benevolent Association.

Helping the community has been a key role for the organization for more than 150 years in Canada.

“Every month there will be a meeting here (in Innisfail),” said Johnston. “We get together, we look after each other and help each other.”