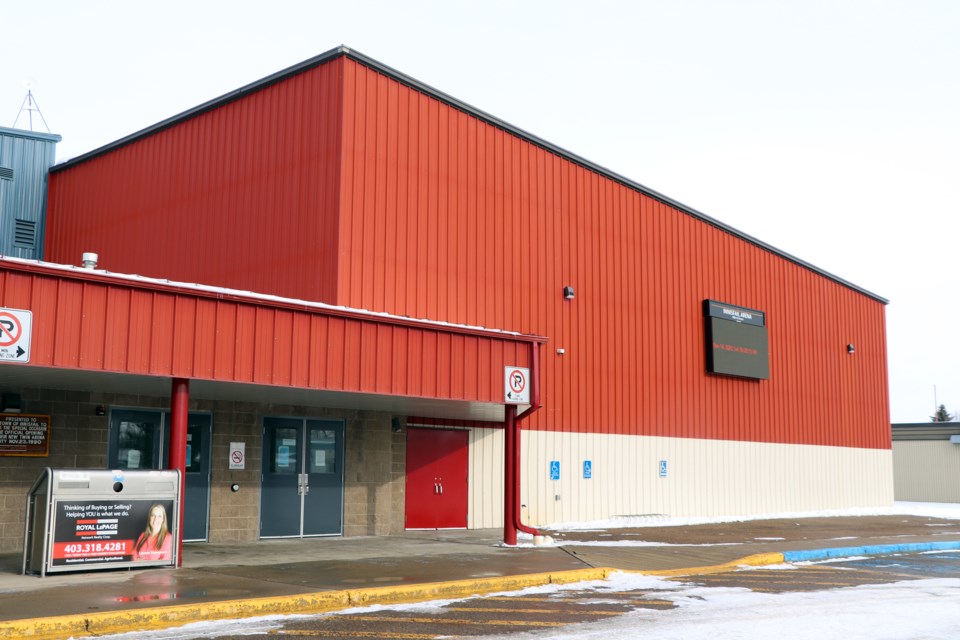 The ice of the red rink at the Innisfail Arena is being removed following the recent announcement by the Innisfail Minor Hockey Association that the remainder of the season has been cancelled. Johnnie Bachusky/MVP Staff

On Feb. 8, town council was fully briefed as to the new usage status of the local recreational facilities following provincial COVID-19 restriction changes that came into effect last week. As well, with the IMHA season cancelled, and other user groups, notably the Innisfail Minor Lacrosse Association, wanting to use a hard surface for pre-season training, the update took on an added importance.

Meghan Jenkins, director of community services, told council the town did have discussions with the IMHA during the first week of February and again on Feb. 8, and the association said it would not take advantage of a new COVID facility protocol of being allowed to have up to 10 participants in an indoor setting. Council was told the IMHA has instead opted to move on with their decision of full cancellation of the remaining season.

“The feedback that I have gotten so far is that really nine kids and a coach doesn’t necessarily really help them. They (IMHA) have basically indicated that they are done in terms of formal hockey use," said Jenkins. "We will still be moving ahead with the removal of the ice.

“Originally, we were going to start today (Feb. 8) but with the extreme cold weather we’ve decided to push that off for a few days because it involves having that big door open for extended periods of time, so it will likely be later this week or even next week until the red ice is actually removed.”

As for future use of the iceless red rink, Jenkins said she did have contact last week with the IMLA on its availability for its upcoming season. She said that will be determined for the IMLA and local baseball once the ice removal is fully completed.

“Once that facility is available, if they are able to work within that group of 10 indoors but still maintaining the three-metre separation,” she said.

Jenkins also told council the town is working closely with the Innisfail Skating Club with a hope their figure skaters would be back later in the week in the arena’s blue rink. She added the original hope was to have one-on-one sessions but there was potential to have group lessons in light of the new provincial COVID restriction announcements.

“They are looking to get back on the ice as much as they can as well as to book some of their testing events they would have in March,” said Jenkins, adding she also talked with IMHA on Feb. 8 about potentially partnering on a non-hockey skating program that could at least get the young on the ice.

She also told council the town has had outreach from “private one-on-one type” hockey clinics. “We are continuing to work through that and hopefully get some things organized as we move through this week,” said Jenkins.

She advised council that as of Feb. 8 the Innisfail Aquatic Centre can host one-on-one lessons. Jenkins added there has been conversations with the local water polo community, as well as contact with a Red Deer swimming club. Jenkins told council administration she will continue to look at what recreational options are available for the aquatic centre.

In a response to a suggestion that local schools might want to utilize the aquatic centre, Jenkins said Chinook’s Edge has told the town its schools won’t be utilizing outside facilities at this time, while St. Marguerite Bourgeoys Catholic School is looking at using the arena for a “bit of time” in March.

As for the Innisfail Curling Club, the ice is currently being removed following the recent announcement of the cancellation of the rest of the season.