OLDS – Town council has approved a couple of proposals from companies that plan to produce medical marijuana in Olds. Plans call for both to be located in the Southeast Industrial Park, just west of Highway 2A, near the cemetery.
Jan 30, 2018 12:00 AM By: Doug Collie 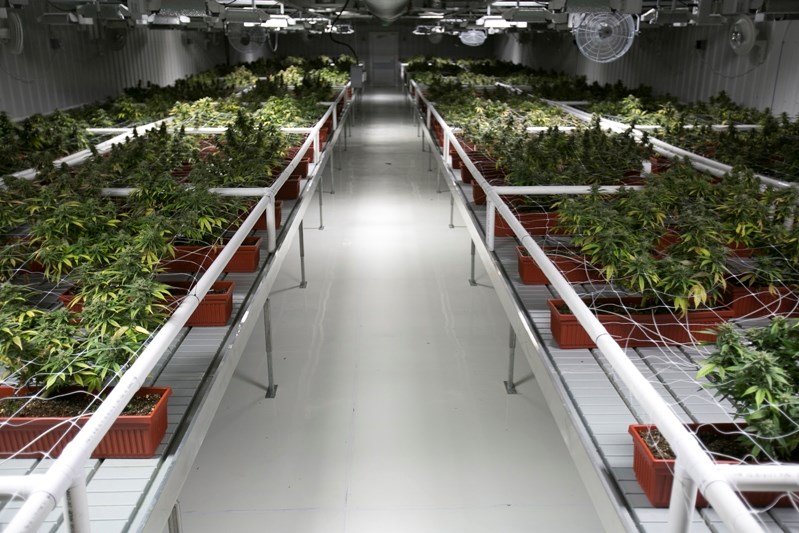 Two company plans to produce medical marijuana in Olds have been approved by Olds town council.

OLDS – Town council has approved a couple of proposals from companies that plan to produce medical marijuana in Olds.

Plans call for both to be located in the Southeast Industrial Park, just west of Highway 2A, near the cemetery.

Council approved a revised plan from Sundial Growers Inc. for Phase 2 of that facility’s development at a 30-acre parcel, addressed as 6102 48th Ave. It calls for creation of three micro-grow rooms, known as pods.

Phase 1 of the construction of the Sundial operation, approved in 2016, is well underway. It involves creating the main office area, two greenhouses and an accessory building as well as doing landscaping, front yard hard surfacing and erecting perimeter fencing.

Phase 1 also includes creation of a stormwater retention pond, which is part of the company’s stormwater management plan. Phase 2 calls for expansion of that pond, pending approval from Alberta Environment and Parks.

"Beside the storm pond there’ll be some future development in the west of that as well,” development officer Carey Keleman told council.

Sundial Growers officials say they anticipate phase 1 to be completed some time this summer and initial production to begin about six months later.

It too plans to locate in the Southeast Industrial Park and is currently negotiating to buy a rectangular piece of land for that purpose at 48th Avenue and 68th Street, just west of Highway 2A.

During the Jan. 22 meeting, council approved an application from Crescent Enterprises to rezone the land from light industrial to direct control 7, which allows medical marijuana facility use and development.

A public hearing on that application was held during the Jan. 22 meeting, providing an opportunity for members of the public to raise concerns about the idea or to support it.

No one raised any objections. Crescent Moon Enterprises president Alan Moon addressed council to support the proposal. A letter of support from Sundial Growers was also provided.

Keleman stressed to council that as of Jan. 22, town officials had not yet received a formal development application for the land in question.

However, town officials had received a site plan as well as preliminary building and site renderings.

"This is all subject to change and of course, it would come to council for approval when the developers are ready to do so,” she said.

"We think we fit well into Olds, first of all because of Olds College. We’ll be looking at people who are graduating from there (to work) in our facility,” Moon said during his address to council.

He said they also plan to work with "other producers in the area.”

"We think we’ll have quite a competitive business. And with those people, we think we can create a real centre of excellence for producing medical marijuana in this area,” Moon said. "We’d like to be a positive addition to the community and we’ll make sure of that.”

"With those people, we think we can create a real centre of excellence for producing medical marijuana in this area," Moon said. "We'd like to be a positive addition to the community and we'll make sure of that."