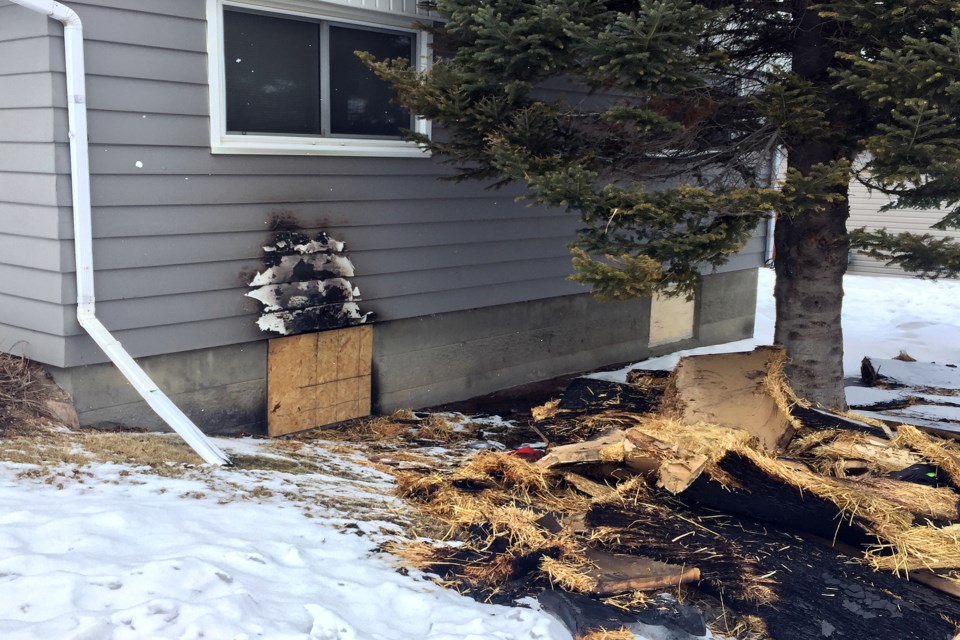 The window to the charred remains of a home's basement near 45th Street that sustained serious fire damage on March 21. Two family cats perished in the blaze. Four occupants in the house safely escaped the fire although one had to go to hospital for smoke inhalation. Johnnie Bachusky/MVP Staff

INNISFAIL – Investigators are still probing a residential house fire that caused the death of two family cats and extensive damage to the home last weekend.

Innisfail fire Chief Gary Leith said a call came in at about 6:20 p.m. on March 21 about a residential fire on 45th Street.

Five firefighting units of the Innisfail Fire Department were dispatched to the scene. Upon arrival, smoke and flames were coming out of a basement window, said Leith.

He said four occupants of the home had left the house, the mother and father, a 19-year-old daughter and her 21-year-old boyfriend.

“One of them was quite ill because he had gone back in to try to retrieve two cats from the basement area but was beaten back by heavy smoke and heat, so he ended up having to go to Innisfail hospital for smoke inhalation,” said Leith, who identified the daughter’s boyfriend as the house occupant who sustained the smoke inhalation. “Once the fire crew made entry they managed to retrieve the cats but unfortunately both of them perished. We did try to resuscitate them but we were unsuccessful.”

He said the boyfriend is now recovering. The daughter also sustained smoke inhalation but declined treatment. There were no other injuries, said Leith.

The local fire chief said the cause of the blaze appears to be “accidental in nature," from an appliance that was left unattended in the basement.

Leith said the house had working smoke detectors and were operating at the time of the blaze to give proper warning to the occupants, which allowed them to escape.

He said the house was uninhabitable after the blaze but family provided refuge.