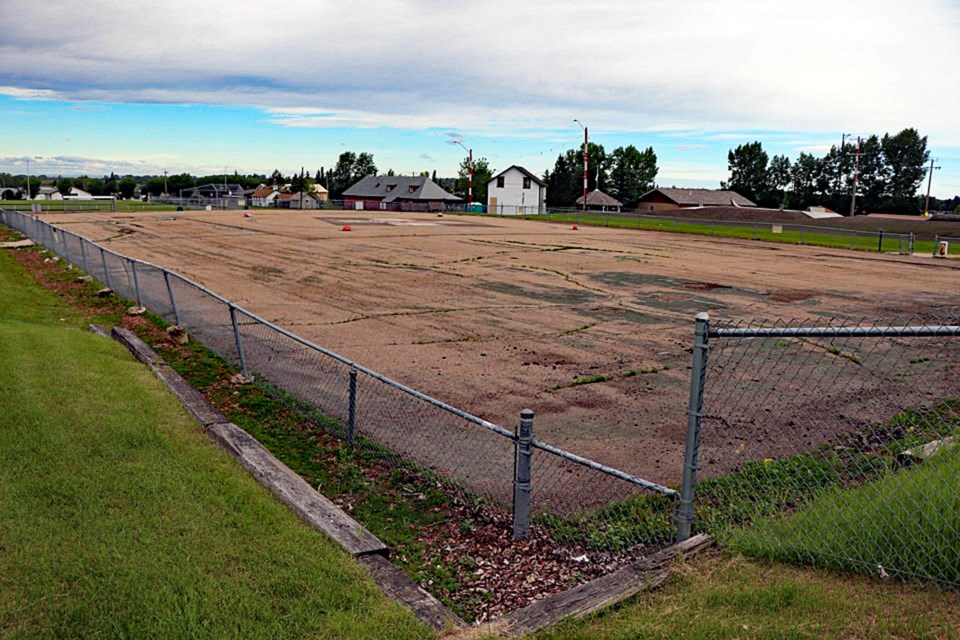 The Innisfail Heliport shortly after it was closed earlier this year. Innisfail council has directed administration to look at site options for its future, including its current site. File photo/MVP Staff

INNISFAIL – Recognizing the future of the town’s heliport is an emotional issue within the community, town council finds itself unable to let go of the current site but still giving administration the green light to look at other options while acknowledging a high price tag and potential liability whatever choice they make.

“This is still a very emotional issue in this community, that people are talking about in their coffee table meetings, etcetera. We shouldn’t assume that all is well,” said Coun. Gavin Bates. “We should not assume that this isn’t still a very lively topic in our community because it very much is. Let’s not be lulled to sleep, to not thinking that this isn’t a big issue because it is.”

The emotional issue was passionately debated by council for an hour at its regular meeting on Nov. 9. Administration tabled a report to council offering three directions it could choose for the future of the 22-year-old heliport by the hospital.

The facility was voluntarily closed last June due to non-compliance with Transport Canada regulations, along with safety concerns due to its proximity to nearby recreational areas, and the necessity to upgrade to accommodate a new STARS fleet. Since June, air ambulance services have operated at Big Bend Airport, and the town has a year to figure out what it wants to do.

Administration said the town could continue to operate heliport services out of Big Bend Airport with no heliport redevelopment at this time, or secondly, redevelop the existing facility at an estimated cost of $400,000 for capital upgrades, along with updates to Operations Manual and training, and an estimated $50,000 for annual operation costs.

The third option advanced to council was to look at a new site at an estimated cost of $1 million, and land acquisition.

In the end, council opted to move forward with a hybrid solution: approving a motion to continue heliport services at Big Bend Airport with administration probing site options, including the current location.

To get to its preferred direction, council engaged in a passionate, and at times emotional, debate.

“It’s rough, and as councillor Bates said it is a very emotional thing and we are faced with those emotions in town. It is very emotional, there’s no doubt,” said Coun. Glen Carritt, who triggered the debate by introducing the motion for the town to look for a new heliport site.

Carritt noted that a consultant’s report, presented to the community last month through an online public engagement forum, clearly stated the current site was unsafe, and that there were serious liability issues the town had to consider.

“I think we can all agree that liability is everywhere,” said Coun. Donnie Hill.

Coun. Don Harrison countered that if the town met all the conditions for certification set by Transport Canada to make the Innisfail Heliport safe, then there shouldn’t be an issue to have the facility reopened.

“If we meet all the criteria of the manual specs then are we deemed safe?’’ asked Harrison. “Looking at that pad, yes there are certainly a bunch of issues that are non-compliant but if we bring that back into compliance with a reasonable cost, why wouldn’t it be safe?”

Coun. Jean Barclay said she wanted the heliport to stay where it is, close to the hospital. She noted long-term service out of the Big Bend Airport is not guaranteed and that volunteers there could ultimately want to get out of the heliport responsibility.

Coun. Danny Rieberger said he felt council had not yet engaged the public enough, noting as well the issue was a “very emotional thing” and wanted other ideas to come forward if Carritt’s motion was defeated, which it was.

“Councillor Rieberger hit the nail on the head. I don’t think we got the public into this situation quite enough to make a final decision at this point in time,” said mayor Jim Romane, adding he was also against Carritt’s motion.

With Carritt’s motion defeated and another passed to look at all available site options, administration will now get to work to find a solution for the community.

Todd Becker, the town’s chief administrative officer, reminded council the town has already done a “significant amount” of community and stakeholder engagements. He wanted to know whether council wanted to “empower” the community to make the decision, and if so, who else should be brought to the table to make input, and should those new engagements be larger or more focused.