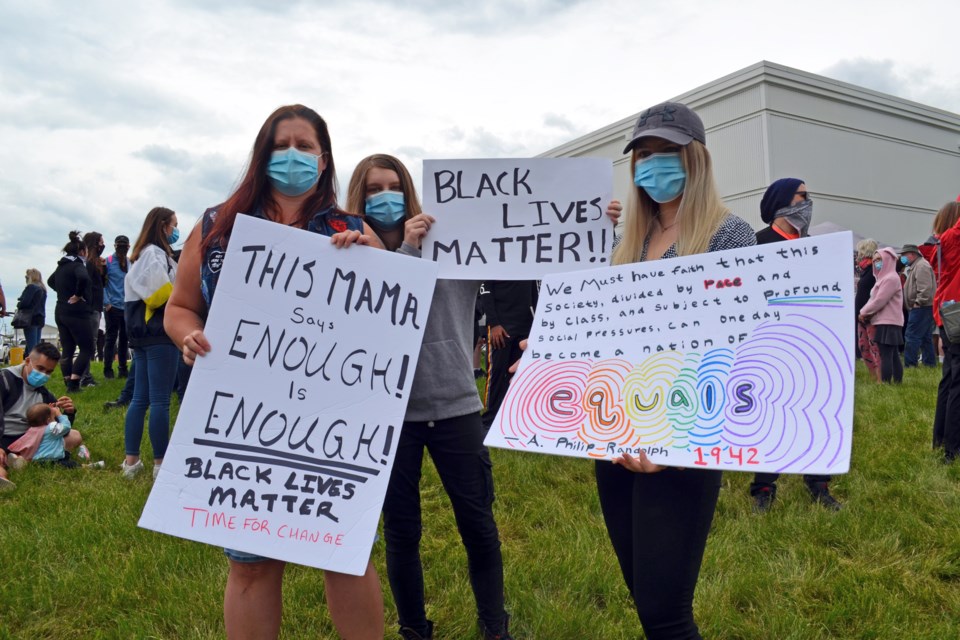 INNISFAIL – The cost to the town for staging the late spring anti-racism rally is close to $10,000 but elected officials say the urgently needed security expense was necessary for public safety.

The security cost figures were released to Innisfail town council during its Sept. 28 regular meeting.

Heather Whymark, the town’s director of corporate services and filling in for vacationing CAO Todd Becker, told council members that direct policing costs for the June 13 anti-racism rally that was held next to NoFrills came to a total of $7,480, which makes up $3,160 for regular scheduled officers and $4,320 for overtime costs.

Whymark told council there would be an additional expense of about $2,000 to cover administration costs for perimeter preparation, rally logistics coordination, fire and protective services standby, and communications.

Coun. Don Harrison, who had just been elected at that time during a byelection, said the cost was worth it, as the town had just received disturbing RCMP intelligence information stating there was a security threat for the rally that had to be taken seriously.

Less than a week before the rally The Albertan reported the RCMP were monitoring reports that the far-right group Soldiers of Odin, which has been identified as being anti-Islam, anti-migrant and pro-white supremacist, had intentions of attending to counter-protest the promised peaceful anti-racism rally.

“Our mandate is to protect our citizens, and the intelligence we were getting, and what the RCMP were getting, was that there could be racist groups actually attending the rally,” said Harrison. “The RCMP gave us that intel, and we said, ‘yes, we have to do something and if it is extra policing then it is what it is.’ (They) said it was very accurate intel and they were worried about it, worried about these other groups showing up.

“So yes, $10,000 to protect our community from a potential threat? Of course it was worth it,” said Harrison.

Although counter-protesters did attempt to incite attendees in the parking lot after the rally ended with loud motorcycle revving and arguing, the RCMP, which were monitoring the event in large numbers, were not forced to intervene.

Mayor Jim Romane said the security issue for the rally evolved right up until the June 13 event was held. He conceded there was a strong urgency factor for well-prepared security measures to be put in place to meet any threat.

“We had better ramp it up here,” said Romane, who agreed with Harrison the security bill was well worth it. “Once you are into that whole scenario there is not much you can do about it without going through with it. It was within our expectations.”

The mayor added that in terms of public awareness and education the cost to the town was also a good investment.

“Yes, I think it was. This whole anti-racism thing wasn’t getting near the attention it should have in the past,” said Romane. “A lot of people were just taking it for granted that it wasn’t an issue but once we opened that can of worms up, some of the people that had been affected by racism came forward and we’ve had some good dialogue with it.

“It has done well with this new Welcoming committee that has taken it (racism) on,” concluded the mayor.