National skating medallist back in the hometown groove 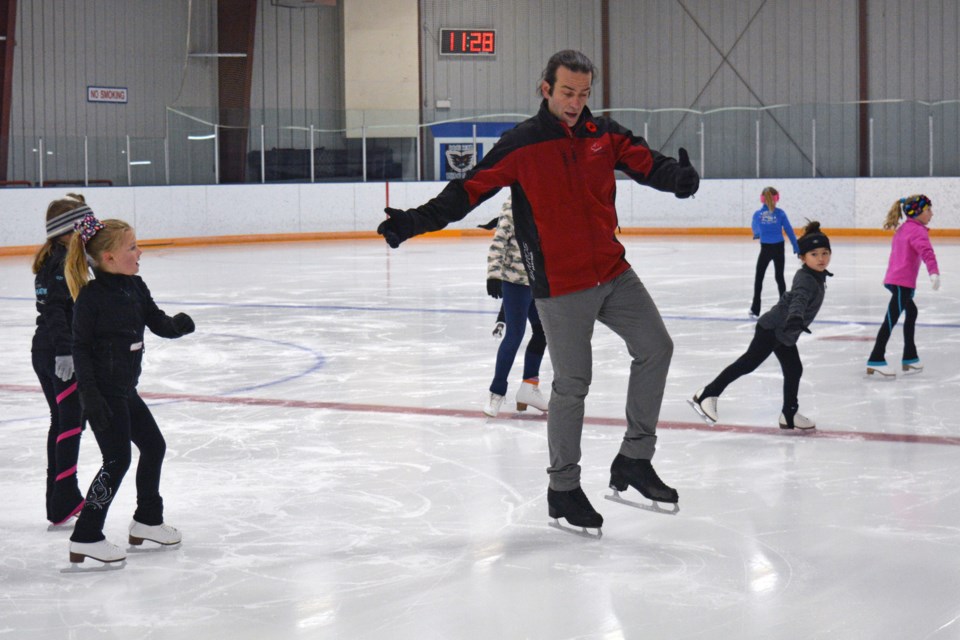 Tophie Davies, a national and international skater, member of Canada's junior national team and national junior pairs medallist, was in Innisfail on Nov. 8 to present a one-day skating seminar at the Innisfail Arena. Kristine Jean/MVP Staff

Christopher Davies, who goes by the name Tophie, is an Innisfail native who made his first trip back here in almost 20 years.

He was joined by fellow national competitor and coach Cecilla Tan.

“We’re really privileged to have them here all day working with beginner levels up to high competitors,” said Nicole Sabasch, president of the Innisfail Skating Club. “They’re working with skaters in all disciplines.

It was the first time having both coaches present a seminar in Innisfail.

“Tophie was born and raised in Innisfail so it’s a real privilege that he’s come back. He’s a hometown boy,” said Sabasch. “He’s skated at the national level in pairs and he’s really well accomplished. We’re privileged to have him back in his hometown instructing kids from across Alberta today.”

A total of 41 skaters of all ages and levels participated in the one-day seminar, noted Sabasch.

“This is an amazing opportunity for any young skater to get direction and input into this sport from different coaches with different insight, technique and experience,” she said.

Today he is a pairs specialist and coach with the Derrick Skating Club in Edmonton.

Davies, now 37, was thrilled to be back in Innisfail.

“I was having a trip down memory lane this morning. The rink still smells the same as it did when I skated here almost 20 years ago,” said Davies. “It’s really exciting and it brings back a lot of (memories) to be in this rink again.”

Davies moved to Edmonton after graduating from Innisfail High School and continued training. He skated as part of the Canadian national team from 2001 to 2003 and retired from competition in early 2004.

“This is the first time that I’ve skated on this ice since the year 2000,” he added, noting he spent eight years with the Innisfail Skating Club, between the ages of 10 and 18.

He shared some memories from his time in Innisfail, including working with former head coach Lynn Schaeffer and participating in annual shows with the Innisfail Skating Club.

“At one of those shows I can remember really clearly in the grand finale, coming around the corner and skating a double Axel and for once landing it in front of the crowd when everybody was watching,” said Davies.

The one-day seminar in Innisfail focused on learning the "in the groove method," he noted, which included balance techniques and learning to skate with music.

Davies also shared his enthusiasm and passion for skating.

“The kids are definitely listening really well and seem engaged,” he said. “We definitely want to make it exciting. The most important thing that we have to teach, for all figure skating coaches, is to teach the love of the sport,” Davies concluded.

A different but chilling crisis half a century ago
Jul 4, 2020 1:00 PM
Comments
We welcome your feedback and encourage you to share your thoughts. We ask that you be respectful of others and their points of view, refrain from personal attacks and stay on topic. To learn about our commenting policies and how we moderate, please read our Community Guidelines.