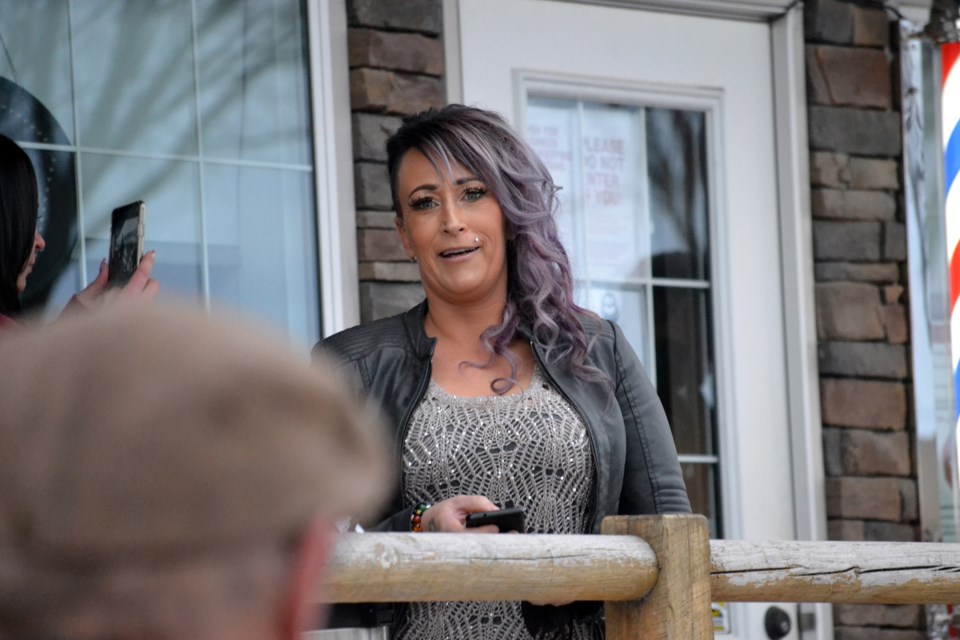 INNISFAIL – Halfway during a recent interview with The Albertan, Natalie Klein politely asked if she could read a brief statement.

"I have had failures in my life. Great failures. But without my failures there is no growth. Without growth there is no change,” she read, and then adding she believes in being “open and honest” with her community.

So it goes for Klein - the 42-year-old co-owner of Bladez 2 Fadez Barbershop who openly defied provincial COVID restrictions for small businesses last month and created an uproar that swept the province and beyond. There was a price to pay.

She will have to face the music for her bold defiance in Red Deer provincial court on March 8. She must answer to a pair of provincial violation tickets. There could be heavy fines.

“I grew through that. I think I had a voice, and I had a voice for many others,” said the unapologetic Klein, who became an Innisfailian 10 months ago when she moved from Red Deer.

And now she wants to take that voice even further. Klein has decided to run for town council, and her name will be on the local ballot of this year’s general municipal election on Oct. 18.

“I have figured that to be a politician we have to stop thinking like one. We need some regular people inside our council to start making changes,” said Klein when asked why she’s running for public office.

“I would like to see a little bit more leadership, and listen to the community, and just expanding forward thinking.”

Klein noted that before her rebellious stand last month no one from town council reached out to give her any advice, suggestions or support.

“Nobody reached out to help me and I would expect that from my council,” she said, adding she will be posting her campaign platform on social media this week and reaching out to citizens during the long nine-month campaign leading to October’s election. “I want to support people. I want to engage with them.

“Like my uncle Ralph used to say, ‘if the public is starting to tell you this is a problem then you better do something about it,” said Klein, referring to her late uncle Ralph Klein, former premier of Alberta.

Klein said she’s pursuing public office on her own dime and won’t accept any donations from supporters, including Rebel News, the pro-small business advocacy group that offered to pay her legal fees over her COVID defiance, and Glen Carritt, the ex-town councillor and now mayoralty candidate who is still continuing his strong opposition to select COVID restrictions.

“I will be funding my whole campaign myself,” she said. “It is all going to be self-funded.”

In the meantime, Klein does concede there will be some, if not many, citizens who are still angry at her for the stance she took against COVID restrictions on small businesses. But Klein insists she has come to terms with that.

“People are going to talk. I don’t expect everyone to like me or even like my past or whatever the case is,” she said. “What matters is that today I have made changes. I’ve grown.

“Without our past we can’t change to a better future, which makes me a great candidate because I can connect with people on a real level.”