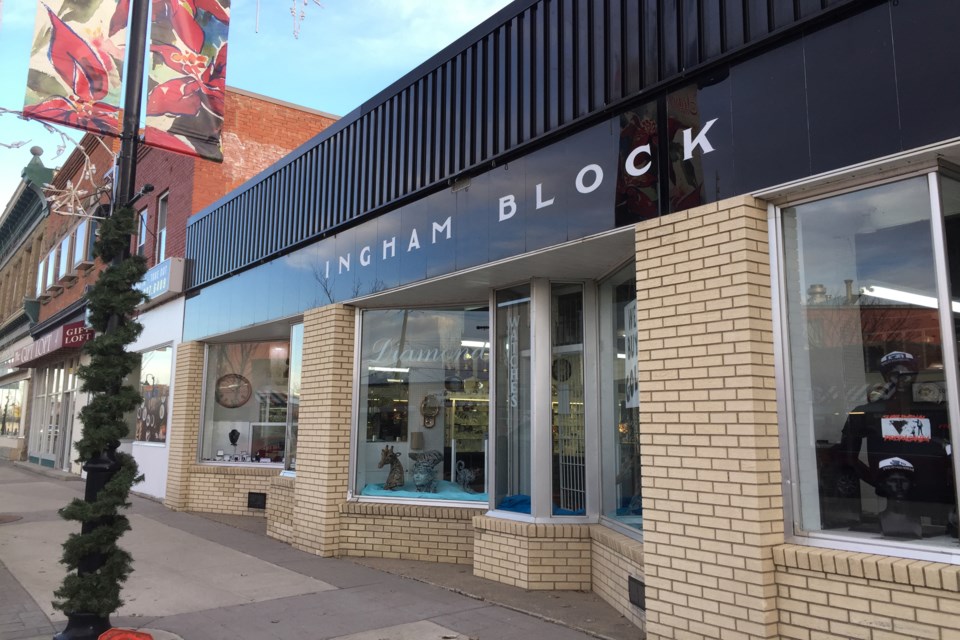 The storefront of the 104-year-old Ingham and Son Jewellers Ltd. store on Innisfail's Main Street. It was burglarized on Oct. 19 with more than $20,000 in damages and property losses. Town council wants to talk to Innisfail RCMP about community crime and if security improvements can be made in the downtown core, especially in the early morning hours. Johnnie Bachusky/MVP Staff

INNISFAIL – Town council wants to team up with the Policing and Safe Community Committee to discuss community crime with Innisfail RCMP following a recent major downtown jewellery store burglary that caused more than $20,000 in damages and stolen property losses.

"There are some pretty frustrated people downtown right now. There are windows that have been etched and $1,600 bills for replacing glass," said Coun. Jean Barclay, noting a rash of downtown vandalism cases in late September that caused serious damage to storefront windows. "It's pretty tough on our small business owners."

“I would like us to proceed to having a meeting with Staff Sgt. (Chris) Matechuk when he is available,” she added.

Barclay made her comments at council’s Agenda and Priorities meeting on Nov. 2 Following her presentation, a motion was unanimously passed that council and representatives from policing committee meet with the RCMP to discuss community crime.

Barclay emphasized that while the local RCMP has made significant progress battling crime in the community in many areas it would be beneficial to have another talk with Matechuk, the detachment’s commanding officer, about whether his members could work to “plugging that hole somehow” between 4 a.m. and 7 a.m. to improve downtown security.

“I know we have spoken about it before. We haven’t really pushed it,” said Barclay. “I don’t know how much we can do but I would sure like to have a discussion with him if that is possible to see how we can maybe change these (times) around a bit.”

The Albertan made numerous attempts last week to Matechuk for comment on council’s motion and the recent burglary but the newspaper’s calls were not immediately returned.

Barclay’s presentation was prompted by last month’s devastating downtown break-in at Ingham and Son Jewellers Ltd., the local jewellery store that celebrated 104 years of business in town this year.

Owner Garth Ingham said he got a call from the alarm company shortly after 4 a.m. on Oct. 19. He said before he left the house to go to the store the alarm company called him back and said police would not respond unless it was a burglary in progress.

Ingham said he and his wife Joanne arrived at the store within 10 minutes and discovered the front window had been completely smashed out.

“There was broken glass all over the street. The glass was all over the front shop,” said Ingham, who believes the crime could have been committed by the same culprits who committed a burglary at his store two years ago. “We had expensive crystal giftware in the front window, probably $1,500 worth, that was smashed, and the glass cases containing our Citizen watches was smashed and about $14,000 worth of watches gone.”

“Both times, this time and last time, with the damage and stolen merchandise, was about a $20,000 loss and I don’t put it through insurance because we are classified as high risk,” said Ingham.

He said his wife Joanne called 911 for police assistance. The store owner said a RCMP officer arrived an hour and 10 minutes later.

Ingham said he later made a statement to police but not before being told that there was a “bunch” of Citizen watches being listed for sale on Kijiji, an online advertising service. He said he contacted local RCMP but as of Nov. 3 he had not received a call back from local police.

“I understand the plight of the police. When they do apprehend someone and get them through into the system the courts often throw it out,” said Ingham at his store last week. “That’s what happened when they caught the guy who stole all my gold chains a few years ago.

“I know council is trying to work with RCMP so we will have a police presence in town overnight,” he said, adding he’s increased security measures at the store.

“My only consolation or blessing out of this is that it wasn’t in daytime, with (the culprit) coming with a gun or a weapon and threatening.”

Innisfail minor hockey plays on pandemic-style
Nov 24, 2020 6:00 AM
Comments
We welcome your feedback and encourage you to share your thoughts. We ask that you be respectful of others and their points of view, refrain from personal attacks and stay on topic. To learn about our commenting policies and how we moderate, please read our Community Guidelines.