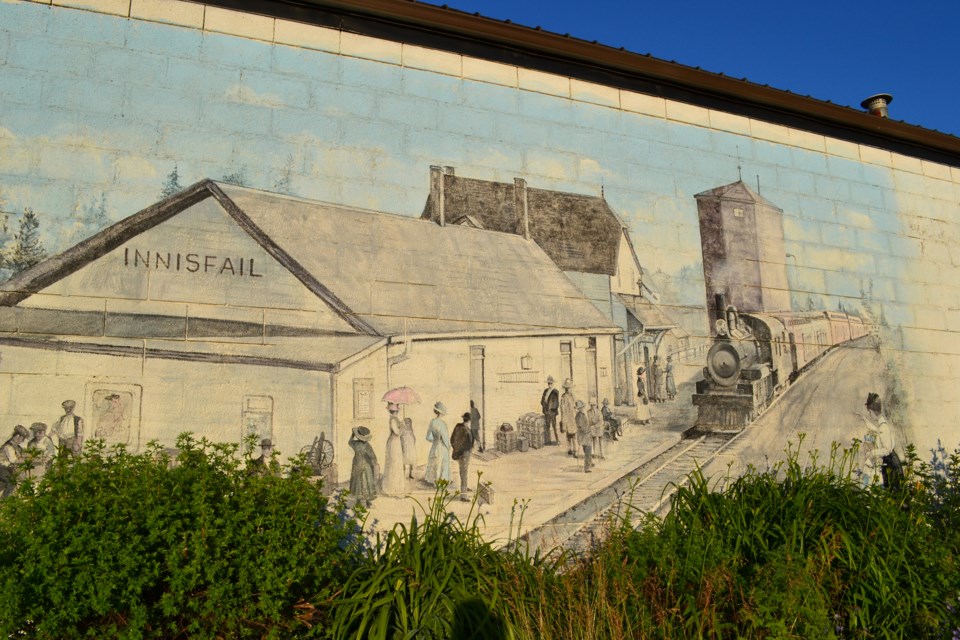 One of the former downtown historical murals that was painted over last year. Following significant concern in the community over the future of public art, town council has agreed to have administration research what other communities have done to promote and preserve outdoor murals. File photo/MVP Staff

INNISFAIL – After nearly three years of promises to at least begin discussions about the future of outdoor murals, town council has directed administration to look at the possibility of bringing in a defined program for the community.

While it won’t be a “policy” that would give outdoor public art legislative protection it could be a precursor and part of an overall policy for arts and culture in town when reviewed under the town’s Strategic Plan schedule for 2021.

Public calls for some sort of defined program or policy for outdoor murals came loudly last year after two historical downtown murals were painted over.

Mayor Jim Romane, who has called for public input into the issue since 2017, said recent interest in creating a new downtown mural made it necessary to move forward now, instead of waiting for 2021.

“I think they (citizens) wanted an answer on murals sooner than later. Obviously there must be some people interested in doing them,” said Romane. “We want to get going to allow people to get this mural thing going. An arts policy is not in place quite yet.”

Todd Becker, the town’s chief administrative officer, said with council’s direction on Jan. 13 his staff will begin gathering information into what other communities have done with mural programs.

“It could be national. It could be more regional. We will certainly talk to the City of Lacombe about their success,” said Becker, adding a report to council should be ready in about two months. "Programs that we are aware of we will certainly make contact.”

The idea to move on a mural program was advanced by Coun. Jean Barclay at the Jan. 13 council meeting.

She said that while discussions on a civic arts and culture policy, which could include a section for existing and future mural projects, are not scheduled until 2021, she felt it was necessary to bring the issue forward to prepare the town for any new mural initiative.

“I have had discussions with a couple of different people who mentioned they may be interested in seeing a mural project take place,” said Barclay. “It’s really important the town be prepared for that, and we get something in place.”

Barclay admitted she does not quite know what it could look like but is hoping good ideas will come forward.

“These projects become an integral part of the community and part of its identity. It would be nice to be able to keep them as long as we can and protect them in any way we can, and be open to new projects that come forward,” she said.

Barclay said it’s important to get feedback from the private sector, as the town can’t control what they do with their buildings. However, she added a new public art program could be part of the existing Façade and Storefront Improvement Program, which has a grant eligibility of up to $5,000 towards façade and storefront upgrades.

“If we have someone who owns the building and they have a mural on the side of it and if it becomes a bit worn, is there an opportunity for us to provide some type of grant, such as a façade grant – except it would be a mural grant, to keep the mural in good shape and update it?" she said. “It makes sense. If I have a building and I have a mural on the side of it. I didn’t put it there but now (the expense) will cost me.”

In the meantime, Barclay’s initiative received restrained support from other councillors. Coun. Doug Bos wondered how private building owners could be regulated or compensated to maintain outdoor murals. He added professional mural painters are hard to find and quite costly. Bos suggested the town should consider looking at innovative ways that would be cost effective, deliver a pleasing final product, last longer and be easier to maintain.

“I think we all need to get a whole lot more educated,” admitted Coun. Gavin Bates, adding he doesn’t believe Innisfail will ever become known as a municipality renowned for murals.  “I just don’t see that but I will never say never.”

Miss Rodeo Canada wows Innisfail with positivity
Sep 24, 2020 5:00 PM
Comments
We welcome your feedback and encourage you to share your thoughts. We ask that you be respectful of others and their points of view, refrain from personal attacks and stay on topic. To learn about our commenting policies and how we moderate, please read our Community Guidelines.