INNISFAIL – Municipalities in Alberta will have to tighten the purse strings following cuts in last week’s provincial budget. And that includes both Innisfail and Penhold.
0
Oct 30, 2019 9:10 AM By: Kristine Jean 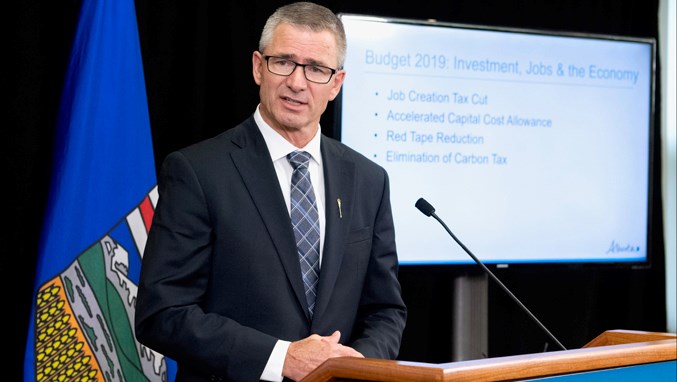 Alberta Finance Minister Travis Toews addressing media in Edmonton last week before the release of the government&#8217;s belt-tightening provincial budget. Municipalities, including Innisfail and Penhold, will see less MSI funding in the future for infrastructure modernization.

INNISFAIL – Municipalities in Alberta will have to tighten the purse strings following cuts in last week’s provincial budget.

And that includes both Innisfail and Penhold.

Earlier this year municipalities received their 2019-20 allocation for Municipal Sustainability Initiative (MSI) funding, however, with the UCP’s budget announcement last Thursday, MSI funding was one of several areas expected to see significant cuts over the next four years.

The MSI program is a grant program that sees the province give money to municipalities to fund infrastructure projects.

Innisfail mayor Jim Romane said the town will see a decrease but is keeping the focus on long-term planning.

That could amount to about $200,000, he noted, adding the town will need to look at the impact it will have on Innisfail’s infrastructure.

"We’ve got a strategic plan for four or five years down the road so we have to look at it and try and estimate what impact it’s going to have over the next two to three years and budget accordingly for projects,” he added.

“In a couple of years, what we know as the Municipal Sustainability infrastructure (MSI) grant, will be a new type of grant. It won’t be MSI anymore,” he said. “It’ll have a different name and it’s going to be based on provincial revenues and profitability, as the province gets to a balanced budget. Revenues will go up or down and that will affect the new funding.”

“MSI operating funds will be remaining, which is very important for Penhold. We are happy to see that,” said Yargeau. “I didn’t see anything that’s going to hurt us in a big way. It seems like they’ve still managed to protect some infrastructure funding.”

Looking at the future picture, Yargeau did express some uncertainty.

“I’m worried it’s a little short-sighted on the government. For Alberta as a whole, there’s increasing infrastructure needs daily,” said Yargeau. “We have more and more people moving to this province. We have communities growing every day and I don’t think Albertans generally care where that infrastructure money comes from, but one way or another the province or the municipalities have to pay for it.

“The province can’t just decide they’re going to cut funding and then we don’t need those critical infrastructure projects anymore,” he said, adding he believes the UCP government is aware of the need.

“I’m sure this government does recognize that. I think they’re working towards building a new replacement for MSI funding,” said Yargeau.

“They’ve been looking for a replacement to the MSI program so municipalities know this is coming and we know that eventually MSI is going to be replaced by something,” he added. “I don’t think a new funding formula or framework is a bad idea. Municipalities need to know what we’re getting and when we’re getting it. It needs to be consistent because we have to plan for that money.”

The Penhold mayor also spoke of the budget's impact on other areas, particularly education and capital spending changes.

“I'm happy to see the school requisition amount will be frozen for next year. It gives us a little more stability when planning our own budget,” explained Yargeau.

“A slight decrease in capital spending means we need to look at our needs even closer to ensure we are looking after the important things that Penhold needs,” said Yargeau. “I look forward to a new fiscal framework in the next few years and hopefully that sets out stable, long-term funding for us going forward.”

With files from Jennifer Henderson of the St. Albert Gazette.