Despite widespread public fear, no arrests or warnings handed out
Jun 23, 2020 6:00 AM By: Johnnie Bachusky 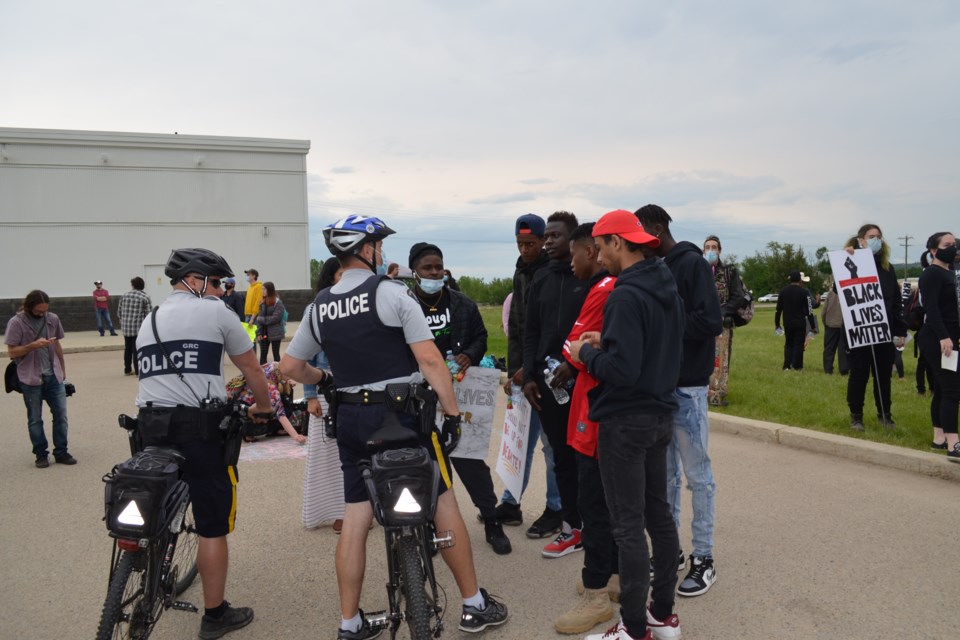 An RCMP bicycle patrol stops to chat with attendees at the June 13 anti-racism rally in Innisfail. The local RCMP said there were no arrests or even warnings handed out during the event. Dan Singleton/MVP Staff

INNISFAIL – Local RCMP witnessed unprecedented community fear leading up to the emotionally charged anti-racism protest on June 13 but when it was over not a single attendee was arrested or even warned about any unruly behaviour.

“The majority of the members had not worked in an event like this. A lot of planning went into it and everybody did exactly what their role was. I see it as a great success,” said Innisfail RCMP Staff Sgt. Chris Matechuk, the detachment’s commanding officer.

He presented a verbal post-rally report at town council’s Agenda & Priorities meeting on June 15, two days after the highly publicized event beside the NoFrills grocery store.

The anti-racism rally, organized by Innisfailian Brittany Bovey, attracted about 500 citizens from across the province.

The event attracted national attention after Bovey was forced to postpone the rally due to strong abusive far right-wing opposition posted on her Facebook page. However, after meeting with Town of Innisfail officials and local RCMP, the 23-year-old Bovey, a recent graduate from the University of Lethbridge, agreed to hold the event on June 13 with substantial organizational support from Calgary social activists.

In the meantime, Town of Innisfail officials and local RCMP were forced to make unprecedented preparations due to public fears of possible violence and health concerns from the ongoing COVID-19 pandemic. Matechuk told council the detachment’s primary concern for the event was to ensure community safety.

"I have never seen the community at large so fearful and concerned for the protest, coming from all levels, from both sides, from the left wing and right wing,” said Matechuk. “We estimated that 80 per cent of the people who attended were not from town.”

He added the influx of so many out-of-town attendees caused significant local concern that social distancing guidelines would not be followed.

“Store owners were closing their stores. The legion was guarding the cenotaph,” said Matechuk. “Everyone has the right to peaceful and freedom of expression, and the general public and local residents have the right to have a safe environment as well.

“But I am happy to say that when the rally came, and about 500 attended, it ended with zero warnings and zero arrests by the police,” he said.

Matechuk, who attended the rally, acknowledged police did have a tense situation at the end of the rally when pro- and anti-protest attendees verbally squared off in the NoFrills parking lot. However, RCMP kept a watchful eye and were fully prepared to handle every situation following several days of comprehensive planning, which involved a total of 15 police officers, including three from neighbouring detachments, bicycle patrols and a special two-member unit from the RCMP’s Community Consultative Management Group.

He said the latter are police officers specifically trained to facilitate open communications between conflicting parties at large public events, such as social protests and labour disputes.

“A big part of our job there was having members building relationships with opposing views towards what was talked about. For lack of a better word they were able to police it themselves,” said Matechuk. “A lot of credit must go to members on the ground for building those relationships up and knowing if things got out of hand police would step in.

“Everything remained safe and police never had to get involved, so all in all everything went well,” he said. “There was overwhelming support and appreciation from the public as well, even from non-residents. They were very, very supportive of their police service.”

Mayor Jim Romane was especially pleased with the RCMP’s successful handling of the event, adding he too was well aware of the high level of community anxiety about hosting the controversial anti-racism rally.

“It was within everybody’s constitutional right to have a rally and express their feelings and I am proud of council for going along with it. We did the right thing,” said Romane. “I am not happy for the residents who were concerned about the event. I understand that but I think we did it in an organized manner. We were well prepared.

“We had meetings with the RCMP and went over everything in detail, and it went just the way we planned it,” added Romane. “It could not have been any better.”

The mayor added the community is still in the middle of a pandemic and any type of gathering would be a concern but added “99 per cent” of attendees were co-operative by wearing protective masks and avoiding close contact.