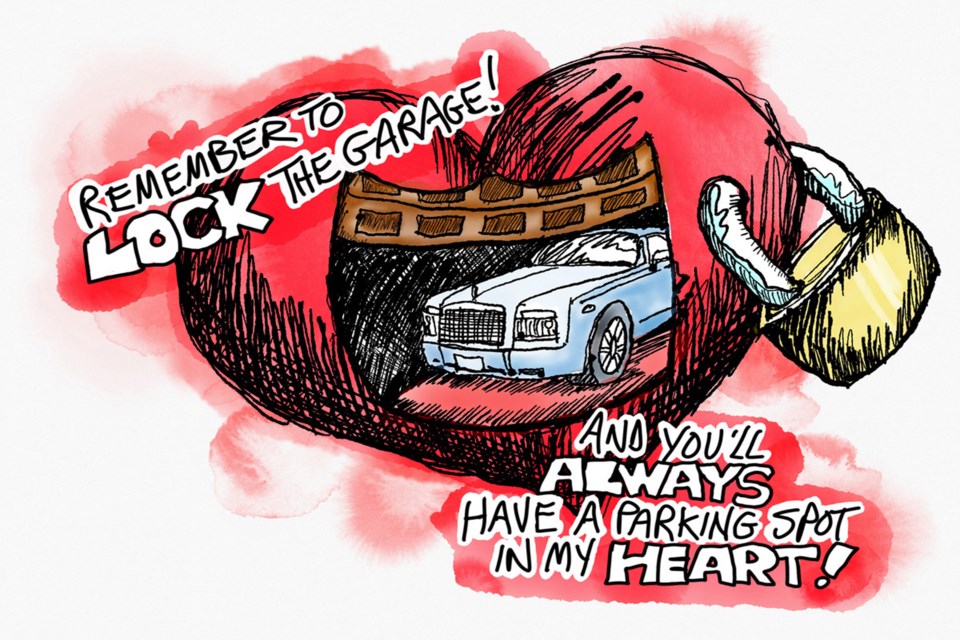 One of the valentines with a security tip message that is currently being sent online to the public from Alberta RCMP social media accounts. Image supplied

INNISFAIL – Mounties across the province have embraced February’s revered day of romance and love to spread a crime prevention message.

“I want you to be mine, Valentine. Stay with me while I’m running.

You are wheelie awesome. Please lock my doors so we can stay together!

You auto be my Valentine. Buy me a steering wheel lock and I’ll be yours forever!”

Those lovey-dovey lines are part of a verse composed by an in-house Alberta RCMP New Media Group. The verse, along with some dazzling artwork, is part of an Alberta RCMP communications campaign for the month of February to remind citizens to keep their vehicles safe from thieves.

"I think the thought process behind this is perhaps a little bit gimmicky but I also think the thought process is to try and grab people's attention so they're understanding and talking about it, and that is half the battle - people talking about this stuff and figuring out how to keep their property safe," said Innisfail RCMP Sgt. Lori Eiler. "I think there is no ill intention. We certainly don't want to make light of the issue. I think putting it out there in kind of a fun way around Valentine's Day is just another way to draw people's attention to a really serious topic."

Fraser Logan, a media relations manager with Alberta RCMP who is the spokesperson for the February campaign, said every month the Alberta RCMP targets a specific theme it wants to put out to the public, which keeps the new media group busy with innovative ideas.

“This isn’t random. We are choosing these themes based on our statistics. Apparently February is a really bad month when it comes to motor vehicle theft,” said Logan. “And how do we cut through that kind of noise? Well, let’s get cute, when appropriate.”

And many people would agree there is nothing more cute and cuddly than Valentine’s Day. Logan said the chosen messaging for February could be a first for the police force.

“We’re trying to be a bit more creative. Why not, right?" said Logan. “Last year we didn’t do anything quite to this level with all the original kind of artwork.”

As fun and visually appealing as the creative work may be, the targeted stolen vehicle theme is all serious business.

Logan’s media release noted that in 2019 there were almost 10,000 thefts of motor vehicles in the Alberta RCMP jurisdiction, with 700 in February of last year. More than 6,500 of those thefts were trucks, SUVs or vans. Thieves stole an additional 1,200 cars.

Alberta RCMP are reminding citizens to lock their vehicles and remove keys. If citizens plan to start their car to warm it up, they should get a remote starter or plan to stay with their vehicle.

As well, RCMP are advising citizens to remove all valuables, use a steering wheel lock, lock their garages, remove garage door openers from vehicles, use a vehicle tracking system and park in well-lit areas.

Alberta RCMP are encouraging the public to report any criminal or suspicious activity to local police. Citizens can also contact Crime Stoppers at 1-800-222-8477 (TIPS), or online at www.P3Tips.com

Pair busted in Innisfail for possession of stolen catalytic converters
Feb 21, 2020 2:35 PM
Comments
We welcome your feedback and encourage you to share your thoughts on this story. We ask that you be respectful of others and their points of view, refrain from personal attacks and stay on topic. To learn about our commenting policies and how we moderate, please read our Community Guidelines.