Last hold out for the kids in Innisfail 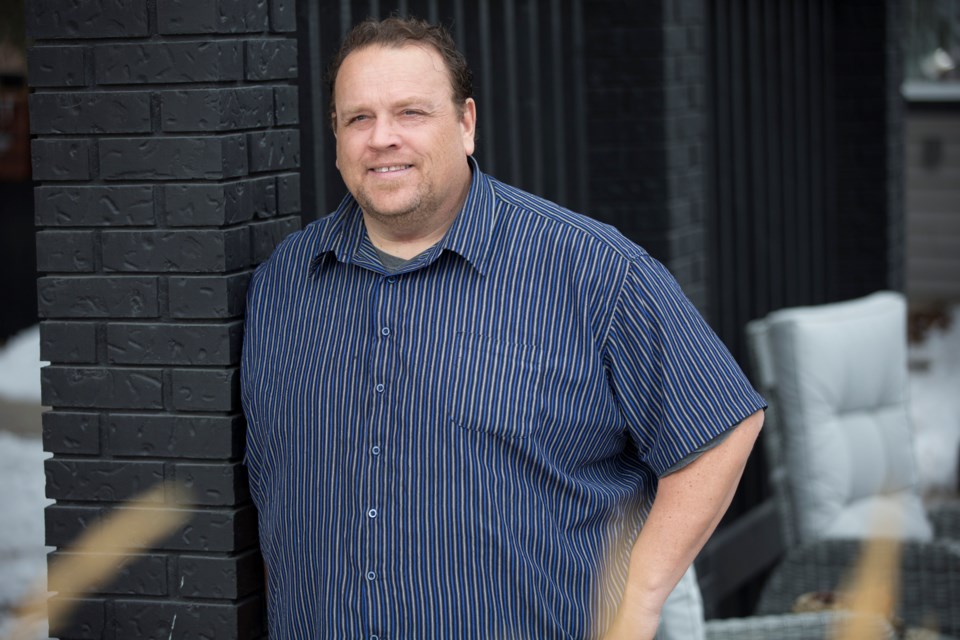 Dean Turnquist at his home in Innisfail on March 21. The founder of the the annual Dean Turnquist Spring Fever Road Hockey Tournament said organizers are still holding out hope that the 25th annual event can still go on next month. Noel West/MVP Staff

INNISFAIL – Schools are shut down. All sporting events suspended or cancelled. Streets are eerily quiet, even at high noon.

But Dean Turnquist holds tightly to faith that could all change soon.

He refuses to jump the gun to cancel the 25th annual Spring Fever Road Hockey tournament scheduled for April 18 and 19 at the Innisfail Arena.

Turnquist lovingly created the tourney a quarter century ago to provide under-privileged children in the community the opportunity to participate in local minor sports programs. Each year thousands of dollars raised from the event go into the Helping Hand Fund, which then is distributed to the needy children of the community.

The road hockey tournament is one of the last major events in Central Alberta that has not been cancelled or suspended in recent weeks due to the war against the COVID-19 pandemic.

Turnquist has heard or read the widespread predictions this public health crisis could go on for weeks, months and even the rest of the year. Even still, his faith remains undiminished.

“At this time, we are still planning on moving forward with the hope the curve flattens in time, and right around a month from now that the town and everyone saying it’s OK to have a gathering,” said Turnquist. “This could be an opportunity to be the first one (large scale event) in our community.”

Turnquist said he and his volunteer committee decided last week there was no point in cancelling now when it can be done in another two weeks if a suspension order is confirmed by either the town, provincial government or Alberta Health Services.

“Yeah, a lot of people are saying, ‘yeah it might be 30 days, it could be three months, it could be a year before they do stuff’” he said. “We looked at it and said, ‘what’s the difference if we cancel two weeks from now or today?’ I’m just being optimistic, I guess. Probably overly optimistic,” said Turnquist. “If things haven’t changed in two weeks we can cancel then.”

For now, event organizers are still moving ahead. Turnquist and his 10-member volunteer organizing committee have hoped to attract up to 200 kids and 130 adults for the tournament. The cost for each child is $25 and $300 for each adult team. All entry fees are fully refundable.

“Nobody is at risk of losing their money for their entry or anything like that,” said Turnquist.

He said it was also expected that up to 800 citizens would come to the tourney to take in the action. As well, organizers are planning a cabaret for Saturday night with three live local bands, including Devin Cooper.

In the meantime, Turnquist can only rely on hope that the pandemic will have a dramatic and quick reversal. He strongly believes that holding on for as long as possible might give dozens and dozens of kids hope, and a first chance in weeks to at least get out of the house and play.

“I am trying to look at this from an optimistic point of view. I try not to feed the fear and keep an optimistic eye,” he said. “If we have to cancel come April 1, we will do that. I would hate to cancel and then find out on April 15 that we got the go ahead to do this.

“In a perfect world and everything works out the way we wanted to we can get kids who might get the first chance to get out of the house to come to an event,” he added. “Their parents will love it.”

For more information about this year’s tournament and the Helping Hand Fund go to www.helpinghandinnisfail.ca

Locals create window walk of art to fight the COVID-19 blues
Apr 2, 2020 2:30 PM
Comments
We welcome your feedback and encourage you to share your thoughts on this story. We ask that you be respectful of others and their points of view, refrain from personal attacks and stay on topic. To learn about our commenting policies and how we moderate, please read our Community Guidelines.