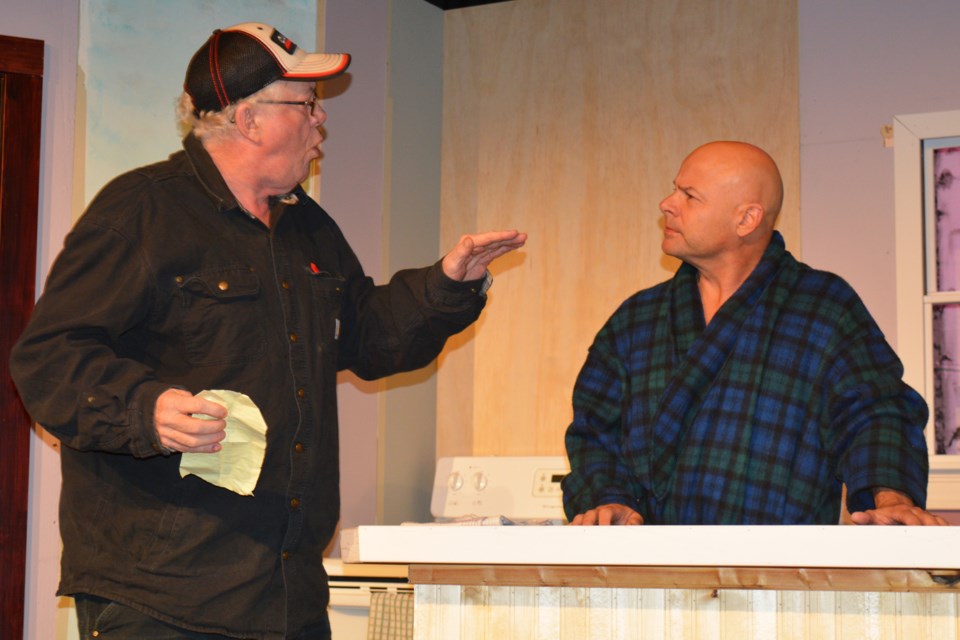 ITT actors Robbin Edgar, left, and Glen Carritt rehearse a scene from the fall production of Ethan Claymore. The play runs at the Ol' Moose Hall from Nov. 20 to Dec. 7.

Rehearsals for Ethan Claymore, by Canadian playwright Norm Foster, began earlier this summer as the cast and crew prepare for their fall play which runs, Thursdays, Fridays and Saturdays, Nov. 20 to Dec. 7.

“We had auditions in mid-August and we jumped right into rehearsals. We rehearse three days a week,” said Karlene Duffy, director. “We do 10 shows over three weeks and finish on December 7.”

The play takes place in a small Canadian town in a modern-day setting.

“It’s a feel good Christmas play,” said Duffy. “It’s about a man who lost his wife five years ago and he’s become a bit of a recluse. He just gets wrapped up in his own little world and he loses the Christmas spirit.”

A nosy neighbour works hard to help him get back into the Christmas spirit, she noted.

“There’s a couple of twists in it,” said Duffy. “There are some flashbacks to his childhood with him and his brother.”

As in the past, Innisfail Town Theatre (ITT) chose a light-hearted play to present for its fall production, said Duffy, noting the joyous time of year just prior to Christmas when many are in the Christmas spirit.

“People love to laugh. They want to feel good at Christmastime,” she said.

There are several returning veteran actors in this production, as well as several new faces, both on stage and behind the scenes, noted Duffy.

“We have a great stage crew and cast. We have a new stage manager this year and we have six cast members for this play, three veterans and three new actors,” she said.

The main character is an egg farmer, portrayed by local actor Glen Carritt. Robbin Edgar and Craig Scott round out the veteran actors returning to the ITT stage. New faces in this fall’s production include Kirstin Merriman, Triston Ryrie and high school student Nolan Williams.

Innisfail’s Serena Bos is overseeing the stage crew as the new stage manager for Ethan Claymore.

“We’ve got our lighting crew, tech and sound crew, a costume designer and we have producers,” said Duffy. “It’s Serena’s first time as stage manager and she’s doing an amazing job.”

ITT’s opening night on Nov. 20 has a general seating with no meal. All other nights, beginning Nov. 21, are dinner theatre productions, noted Duffy.

“I want people to come away knowing that we work very, very hard to do our absolute best work and I feel we put on a fantastic show,” said Duffy. “I hope everybody leaves happy.”

Tickets for ITT’s production of Ethan Claymore are available at The Leg Man in Innisfail.

Commentary: Severity of 1964's great blizzard was worse
Jan 21, 2020 2:20 PM
Comments
We welcome your feedback and encourage you to share your thoughts on this story. We ask that you be respectful of others and their points of view, refrain from personal attacks and stay on topic. To learn about our commenting policies and how we moderate, please read our Community Guidelines.