The Transportation Safety Board is investigating the mechanical parts of a derailed Canadian Pacific Railway train to determine what caused it to jump the tracks a few miles north of Innisfail along Highway 2A last Tuesday morning.
Jan 25, 2011 12:00 AM By: Mountain View Today Staff 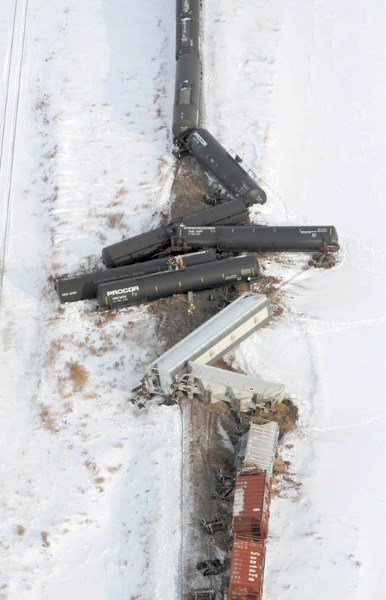 Emergency crews responded to a train that derailed near the Niobe grain elevator just off of highway 2A at 5:22 a.m. last Tuesday morning. Eighteen cars derailed and caused the closure of highway 2A.

The Transportation Safety Board is investigating the mechanical parts of a derailed Canadian Pacific Railway train to determine what caused it to jump the tracks a few miles north of Innisfail along Highway 2A last Tuesday morning.

Investigators say they are unsure at this point what actually caused the train to derail but are starting the investigation by looking at some of the mechanical parts taken from the scene, said James Carmichael, regional senior investigator with the Transportation Safety Board.

Eighteen cars derailed from the tracks at 5:22 a.m. on Tuesday, Jan. 18. Emergency crews were called to the scene located near the Niobe grain elevator, just north of Innisfail at around 6 a.m. said Ric Henderson, Red Deer assistant manager and director of community and protective services.

The incident caused the closure of highway 2A from Innisfail to Range Road 282 from Tuesday morning until 10:45 p.m. Wednesday evening.

The train was a mixed freight and the cars that derailed were carrying three loads of sand, mixed grain, peas, and anhydrous ammonia, said Kevin Hrysak, a CP Rail spokesperson.

Investigations immediately after the incident determined there was no risk to the public in the surrounding area or to the environment. There were only two people on board the train at the time of the derailment - the conductor and the engineer. Neither were injured during the incident.

Hrysak said officials from the Transportation Safety Board, Transport Canada, Canadian Pacific Railway, and Agrium, the company that produces the anhydrous ammonia, were all involved in the monitoring and clean up of the derailment.

The Transportation Safety Board, an independent organization that investigates transportation incidents across Canada, is in charge of the investigation into the cause of the derailment.

Carmichael said this has left investigators unable to rule out any factors but said that the tracks seemed to be in good shape.

If mechanical problems are to blame, Carmichael said recommendations can be made to help improve railway safety.

“When an event like this happens we respond to the site and our primary consideration is resident and public safety,” said Henderson.

“We first work to contain the site, control access, and in this case because some of the cars carried the anhydrous ammonia, we got a hold of Agrium and they sent their experts.”

Because the incident took place within the county, they took the lead but it was within the Innisfail fire department’s response area so they assisted, said Daryl Joyce, Innisfail’s director of corporate and emergency services.

Had the incident occurred in town, officials would have activated the municipal emergency response centre, which is located at the town office.

If the situation involved a dangerous chemical then the procedure is usually not to evacuate but to shelter in place if near the affected area, said Joyce.

This is the second train derailment in Red Deer County in the last six months, with the last incident occurring in between Springbrook and Red Deer in June. However there were no dangerous goods involved in that derailment.