INNISFAIL – Members of town council, town staff, the Kinsmen Club of Innisfail and the Kinette Club of Innisfail recently gathered to officially open the town's new skatepark. A small ceremony took place at the skatepark on Oct. 24.
0
Oct 28, 2019 12:12 PM By: Kristine Jean 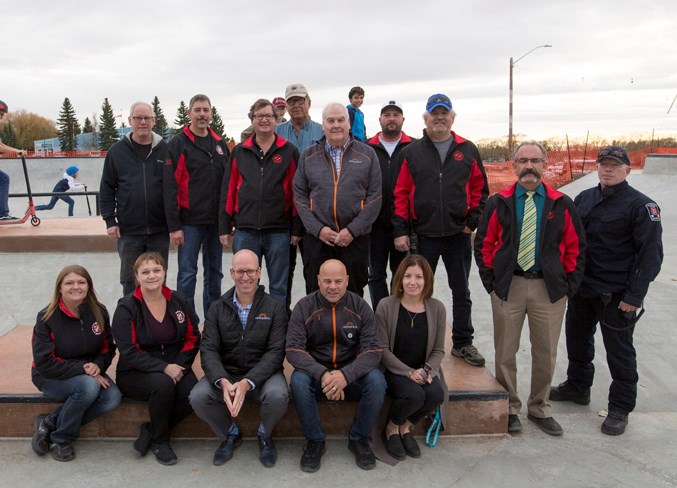 A small ceremony took place at the skatepark on Oct. 24.

“I do believe this is the kind of facility that you build it and they will come,” said Gavin Bates, deputy mayor. “I think the location is perfect. It’s close to the schools, the pool and the ball diamonds, so when there’s activities going on there, there’ll be kids coming here.

“I totally feel it’s a feather in Innisfail’s cap,” he added. “The last two councils (were) 100 per cent in favour of building it despite the price tag and some of the changes and delays,” said Bates. “I think it’s a terrific example of cooperation between town staff, council, service clubs, citizens and the kids.”

Members with the Kinsmen Club were also on hand for the official announcement.

“We are very happy how New Line Skateparks got everything together on time and it’s great that it’s finished early enough for kids to use before the snow comes,” said Russ Klemmer, the club's past president and skatepark fundraising coordinator. “It’s fantastic to see all the kids out here.”

Klemmer said about $62,000 has been raised from community and business donations so far. They are still awaiting confirmation for a $125,000 matching grant from the province.

For users of the new skatepark safety will be important to remember at all times, said Gary Leith, the town’s protective services manager.

“Our current traffic bylaw does state that anybody operating a bicycle, a scooter or a skateboard under the age of 18 should be wearing a helmet. That applies here at the skatepark as well,” said Leith.

“It’s about education at this point in time so there’s no enforcement,” said Leith, adding officers on regular patrols in the area may stop and speak with those under 18 not wearing helmets.

“The whole point of this is that people play safely and enjoy themselves.”

Town officials said the skatepark was completed ahead of schedule.

“We were originally told it would be about mid-November before it was open,” said Meghan Jenkins, manager of community planning and sustainability. “So we’re about a month ahead of schedule, which has allowed the kids to use the skatepark more this fall than we anticipated, which is great.”

Landscaping details are expected to be complete next spring, and include trees, sod and shrubs, picnic tables, outdoor lights and signs, noted Jenkins, adding that graffiti will not be allowed in the new facility and users will need to respect the grounds and other skatepark visitors and follow local bylaws.

Jenkins said once all landscaping is complete, a grand opening and ribbon cutting is expected to take place some time next spring or early summer.