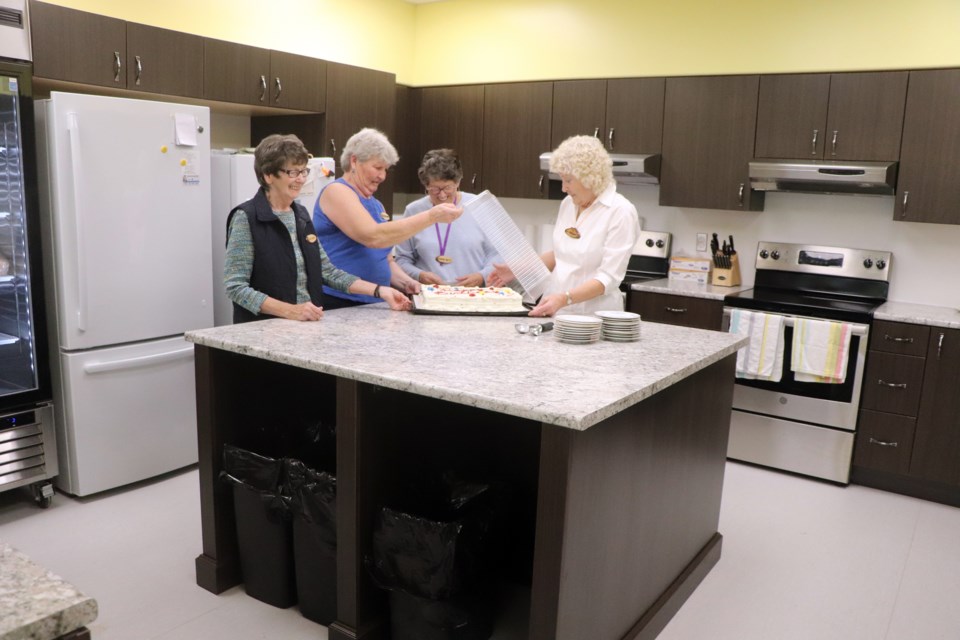 INNISFAIL – The long held dream of the Innisfail Senior Drop-In Society is now a reality - fully modernized and ready to meet the needs of more than 300 of the town’s most cherished citizens.

The Lundgren Centre, the society’s home, has now been fitted with its long-awaited state-of-the-art kitchen, as well as new vinyl flooring throughout the facility, office upgrades, and an improved storage room.

“This has been a longtime dream, a 10-year dream,” said Lucille Paquette-Lohmann, the society’s program co-ordinator.
“Everyone who has walked through the door is really pleased with the renovation. They felt it is worthwhile.

“The kitchen definitely needed upgrading. I am really happy for them that they have a new facility to work out of,” she added. “We know that it is clean and up to standards.”

The modernization project, which cost $150,000, was paid for through fundraising, as well as a $25,000 grant from the federal government’s New Horizons for Seniors Program. According to Town of Innisfail records, the project also received council-approved support of $10,000 last May 27, and additional local funding of $35,900 on June 10.

Construction at the facility, next to the old fire hall on 53rd Street and used by seniors since 1976, began last May and was completed by the beginning of November. During that time the drop-in centre at the Lundgren Centre had to be closed for the last two weeks of September and into the next month before reopening on Oct. 7 to have the main wall taken out where the old kitchen was.

“It would have been a bit dirty and dangerous to have it removed if we were active in there,” said Jean Bennett, a member of the renovation committee.

Bennett said the new modern kitchen gives the society greater flexibility and versatility with events and the number that can be hosted.

“We can certainly accommodate a lot more people for a dinner than we could in the past,” said Bennett, adding the most recent renovations complement earlier modernization projects, which include construction of new washrooms and the removal of an old wall that was “just hiding a hallway.

“We made our centre bigger that way,” she said, adding with the larger new kitchen there are new projects for its use, including special dinners. “We are having ethnic dinners that are once a month until at least July. There is also a luncheon made every Thursday, and on Saturdays for the music jam. Sixty-five to 80 people come to that and we serve a lunch.”

In the meantime, the drop-in centre is open six days a week for all activities, with special events for Sundays.

Most importantly, Innisfail seniors now have a facility they and the entire community can take pride in.

“When we were finally able to open the doors I got lots of comments like, ‘I am so glad you are open. I did not know what to do with myself the last three weeks. I really missed hanging out here. I really miss coming to see my friends,'" said Paquette-Lohmann of the comments heard during the centre’s three-week early autumn shutdown.

“Lots of people I think realized what this place means to them.”

Paquette-Lohmann said a date for the grand opening of the fully modernized facility would be announced in the future.

Innisfail grad ceremony postponed until fall
May 29, 2020 4:00 PM
Comments
We welcome your feedback and encourage you to share your thoughts. We ask that you be respectful of others and their points of view, refrain from personal attacks and stay on topic. To learn about our commenting policies and how we moderate, please read our Community Guidelines.