INNISFAIL – Bilton Welding and Manufacturing Ltd. is giving a boost to Alberta’s oil and gas industry.
0
Sep 17, 2019 7:05 AM By: Kristine Jean 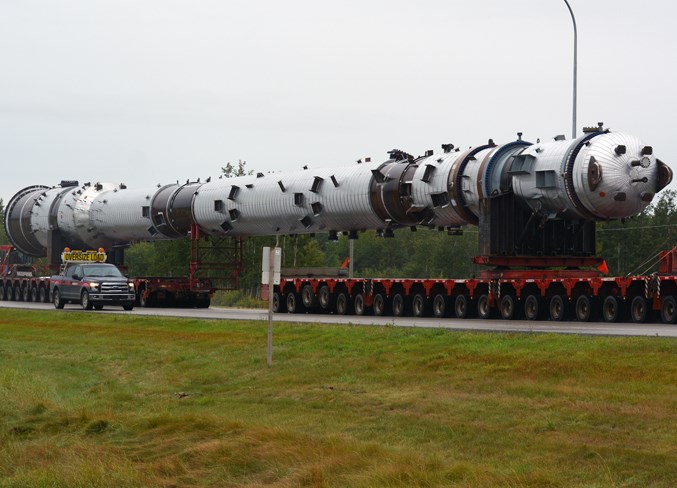 Bilton&#8217;s latest completed project, a polypropylene recovery column, left Innisfail on Sept. 10 for a three day trip to its destination in northern Alberta. The tower, is 195 feet in length and weighs an estimated 585,200 pounds.

INNISFAIL – Bilton Welding and Manufacturing Ltd. is giving a boost to Alberta’s oil and gas industry.

The company recently completed the last of several pieces of equipment -- a propylene recovery column (tower) -- for a new polypropylene production plant, currently under construction in northern Alberta.

“This is a big project for us. It’s been just over a year and took over 10,000 man-hours to complete,” said Darren Andrews, vice-president of operations. “We’re excited that we were able to get this (contract) and be able to deliver this project for such an important facility in Alberta.”

The tower is one of two, similar in size and complexity, that Bilton constructed for the Strathcona County facility. It was the last and the largest of 15 contracts awarded to Bilton.

“We have 15 different pieces of equipment that we fabricated for this plant. This is just one of them,” said Andrews, adding that he wasn’t able to disclose the cost of the tower, but did note the plant being built is about $3.5 billion.

“We are one of many Alberta companies that are building this type of equipment for this plant,” he added. “It’s a really great opportunity for a company like ours in Central Alberta to be able to take on a project like this and complete it without subcontracting out any of the work that went on here.”

The tower is made with cutting edge technology and will be used to help process gas at the new facility in Strathcona County.

“It’s going to be taking propane and eventually turning it into plastic,” explained Andrews, noting the project's positive economic impact and job creation for Innisfail.

“We absolutely did hire for this job. We’ve been very fortunate to be quite busy over this past year and this project has been a big part of that,” he said. “For us locally, it’s important because we do employ over 200 people here.”

Bilton has been one of Innisfail’s largest employers for 26 years. While they have worked with the mining and agricultural industries in the past, said Andrews, they would like to continue their involvement in the oil and gas industry, assisting with the construction of facilities that refine oil and gas and natural resource products.

“This particular project has been a big learning experience for our company because we’ve been working with a lot of international suppliers and partners as well,” said Andrews. “It’s really helped us grow as a company.”