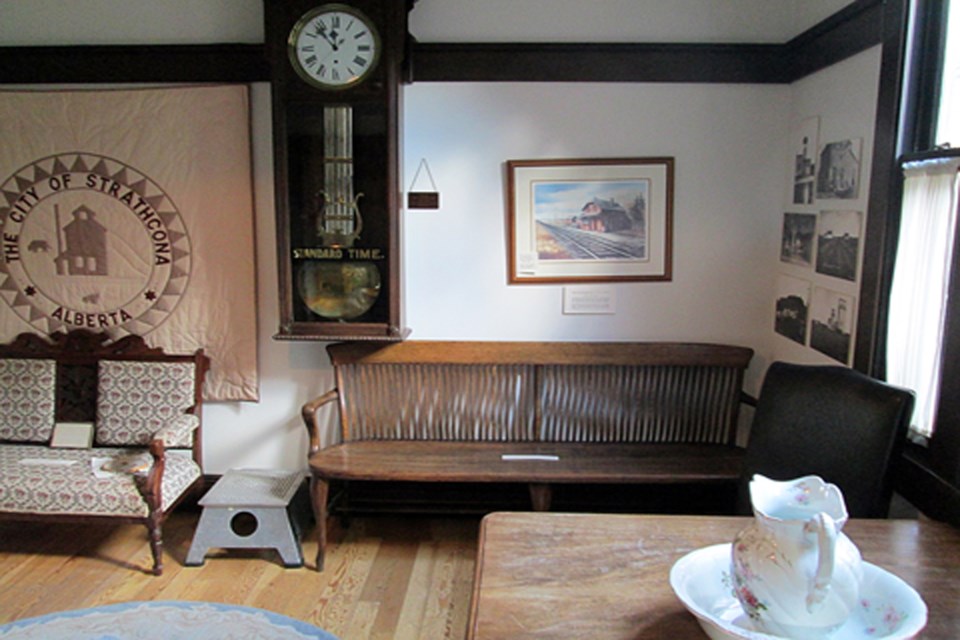 A past photo of railway station artifacts, including a clock, bench, furniture and photos, at the now closed Calgary & Edmonton Railway Station Museum in south Edmonton. Submitted photo

INNISFAIL – The old Bowden train station at the Innisfail and District Historical Village is about to be enriched with hundreds of valuable artifacts.

Last week, the collection of well over 200 train station artifacts arrived at the village, thanks to the Forth Junction Heritage Society.

The artifacts were originally obtained by the Junior League of Edmonton to display and preserve in the Calgary & Edmonton Railway Station Museum in Edmonton. But the museum closed in 2018 and the Junior League gifted them to Forth Junction.

After acquiring the collection, Paul Pettypiece, the president of Forth Junction, had it stored for 18 months at StoreSmart Self Storage in Gasoline Alley, but the cost became prohibitive and he then made an agreement with Innisfail’s historical society.

“We made an arrangement that they would store and display the artifacts until we have our own facility,” said Pettypiece, adding the artifact collection is “pretty significant.”

Meanwhile, he said his society is still seriously interested in having its permanent home in the Innisfail area but acquiring a promising site could take a few years until economic conditions improve.

“It’s still on the table,” he said of the site. “Until things turn around we are in a wait-and-see period.”

The society hopes some day all the right conditions will fall into place to build a 25-acre heritage rail park on a quarter section of property owned by Melcor Developments just north of Discovery Wildlife Park.

In the meantime, Anna Lenters, board president for the Innisfail and District Historical Society, was busy last week organizing the first shipment of the artifacts into the Bowden train station. The rest are arriving on March 14.

“No one was seeing them because they were in storage. We went to the storage place and took a peek of how much there was and we figured we could accommodate them,” she said. “They come to us on a loan agreement, which is done in the museum industry and is common practice.”

Lenters said the agreement between the historical village and the Forth Junction is “open ended” in terms of how long the artifacts remain at the village, and dependent on the Forth Junction’s ability to acquire its first permanent home.

“They are safe with us,” said Lenters of the artifacts.

“We already have a train station so it all kind of makes sense.”

She said it’s expected the entire collection will go into the Bowden train station, unless museum staff determine there is just too much.

“We are moving things around now to accommodate what’s coming in. I learned very, very quickly that things mushroom because of the process of cleaning up our history room and reworking it before painting the walls. It was like, ‘oh my gosh I did not know we had so much stuff,'" said Lenters.

“If you are a railway enthusiast and we already have the railway station, which tells that story, this just expands upon it. They are the real thing. They came out of the railway's station.”

She said it’s hoped the basics for the new display will be ready in time for the museum’s season opening in May. The display will then be “fine-tuned” over the course of the summer, said Lenters.

“What that means is that when our guests are there at the park we will be working, and they like that,” said Lenters. “Because then they can ask you questions. I have learned that they enjoy that. They want to know what you are doing and how you are doing it.”