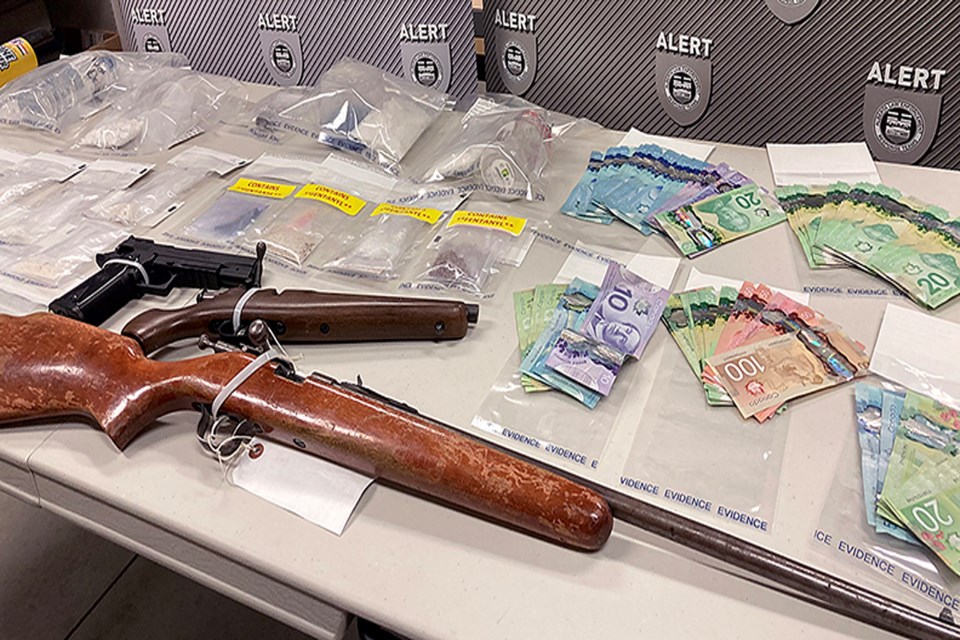 A Red Deer police organized crime team, with the assistance of Innisfail RCMP, has made a major drug and weapons bust in town. Submitted photo

In a press release released on the website of the Alberta Law Enforcement Response Teams (ALERT) officials said a short-term investigation by the agency’s Red Deer organized crime team resulted in the seizure of a wide variety of drugs from a home in Innisfail, which led to the arrest of two women.

ALERT said the two-week investigation wrapped up on June 25, as ALERT investigators executed a search warrant at a house in the 4000 block of 48 Avenue in Innisfail. Assistance was provided by Innisfail RCMP.

Once inside,investigators seized more than $23,000 worth of drugs and cash, said ALERT. The drug seizures included:

As well, ALERT investigators seized two .22-calibre rifles, with one having the barrel sawed off. Police also seized hundreds of rounds of ammunition.

“The wide variety of drugs seized during this investigation is remarkable, especially for a town such as Innisfail,” said Insp. Sean Boser of the ALERT Regional Teams. “Being able to act quickly to get drugs and firearms out of these suspects’ hands is a big win for community safety.”

Innisfail RCMP Staff Sgt. Chris Matechuk said having a law enforcement partner like ALERT to collaborate with on investigations has proven to be “invaluable".

“The drug trade and associated violence are problems that are not confined to urban centres. We will use every resource at our disposal to keep our community safe,” said Matechuk.

Pamela Jacobson, 43, and Keanna Chuhaniuk, 24, are each charged with:

Citizens who suspect drug or gang activity in their community can call local police, or contact Crime Stoppers at 1-800-222-TIPS (8477). Crime Stoppers is always anonymous.

Innisfail's Terry Fox Run ‘strange’ but still successful
Oct 20, 2020 9:00 AM
Comments
We welcome your feedback and encourage you to share your thoughts. We ask that you be respectful of others and their points of view, refrain from personal attacks and stay on topic. To learn about our commenting policies and how we moderate, please read our Community Guidelines.