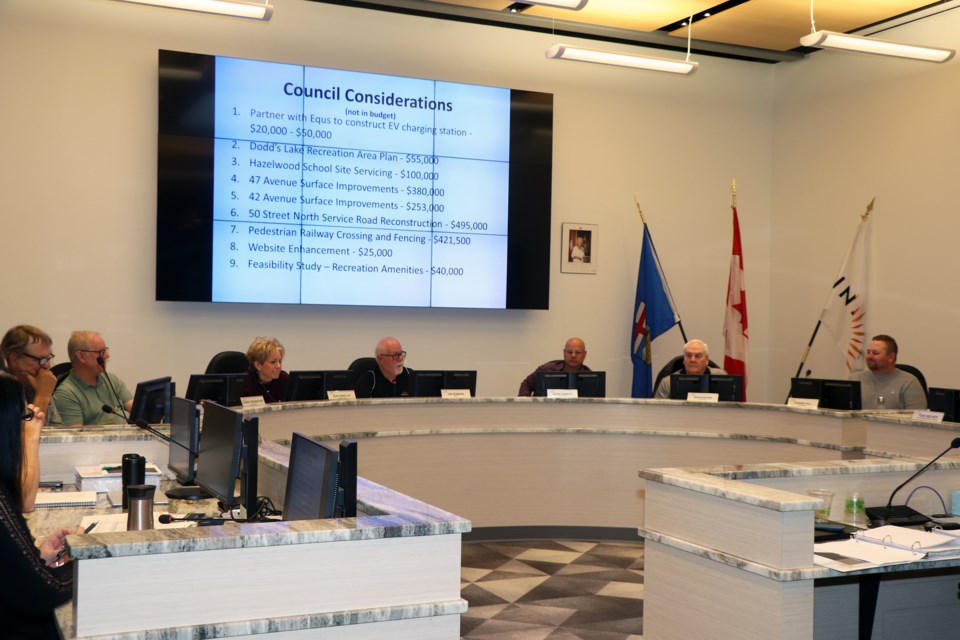 Innisfail town council will experiment with a two-month trial run with regular daytime council meetings instead of in the evenings beginning on July 6. File photo

INNISFAIL – Beginning the first Monday of next month town council will meet in the early afternoon instead of evenings for its regular meetings – at least until the end of August.

It is a trial two-month initiative to see if there is greater public interest to attend meetings and for citizens to become more engaged with local issues.

Mayor Jim Romane made a motion at council’s regular meeting on June 22 for council to consider day time regular meetings every second Monday beginning at 1 p.m. Council agreed to begin a two-month trial run on July 6.

“I am keen to give it a try,” said Romane. “The biggest thing is the impact it will have on staff. With staff there are done regular shifts at 4:30 p.m. and they’re back at council for 6 p.m.

Romane said the trial run might open up a wider range of people who might be interested in running for council. He said day time council meetings might interest parents who have the responsibility of taking care of children after school and can’t commit to evening council meetings.

“Maybe an afternoon meeting wouldn’t impact them as much,” said Romane. “We will see how it goes and get the feedback after a couple of months and go from there.”

During a past spring council meeting, Coun. Jean Barclay raised the issue day time council meetings as the idea could attract more local women to become more active in civic affairs, especially for ones who found evening meetings too much of a barrier to attend.

“I think it is a great move to try it,” said Barclay, who has reached out to other municipalities who have afternoon council meetings. “It seems to be positive from many aspects.”

She also believes daytime meeting will be good for town staff as evening meetings present tiring days if council meetings go as long as three hours on top of the regular day shift. Barclay said it might even be easier for stakeholders who have to come in and make presentations.

Barclay also said another issue is whether a 1 p.m. day time council will be a barrier for citizen delegations to attend.

“That is one thing we need to make sure we keep an eye on,” said Barclay. “We will see how it goes. We will evaluate after a couple of months and see how everybody feels.”

Business as usual, says new EQUS CEO
Aug 9, 2020 8:00 AM
Comments
We welcome your feedback and encourage you to share your thoughts. We ask that you be respectful of others and their points of view, refrain from personal attacks and stay on topic. To learn about our commenting policies and how we moderate, please read our Community Guidelines.