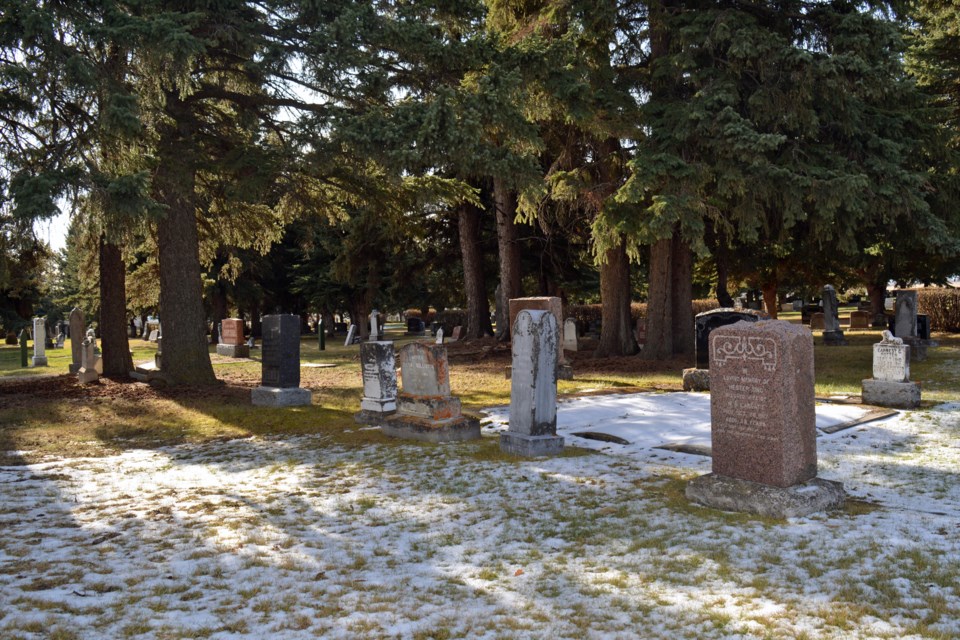 Grade 4 students at St. Marguerite Bourgeoys Catholic School were going to lay poppies on all veterans' graves at the Innisfail Cemetery in a special ceremony on Nov. 6. The event was cancelled. Kristine Jean/MVP Staff

Grade 4 students were to participate in a special ceremony at the Innisfail Cemetery in partnership with the No Stone Left Alone Memorial Foundation on Nov. 6.

The decision was made on Nov. 5 to cancel the event because of a snowstorm that blew through during the day and evening. Red Deer Catholic Regional School buses serving rural routes including Innisfail were cancelled for Nov. 5 and Nov. 6. Chinook's Edge School Division also cancelled buses on both days.

David Griffin, St. Marguerite vice-principal, said the special ceremony was to be held "so students can stay connected to veterans. There’s less and less veterans with us nowadays."

It is the first time St. Marguerite Bourgeoys School would have participated in the ceremony.

“Last year Red Deer Catholic Regional Schools (held a ceremony) in Red Deer. We saw how great an effect it had on the students there and we wanted to bring it to our students in Innisfail,” said Griffin.

The foundation, created in 2011, works with schools across the country to educate students, and honour and remember the service and sacrifice of Canada’s military.

While at the Innisfail Cemetery, students will participate in a liturgy, prayers and lay poppies on all the graves that belong to Canadian veterans.

“Our associate superintendant of faith, Ryan Ledene, will be there to show his commitment,” said Griffin. “When we talk about a Remembrance ceremony we tie in our Catholic faith and hold a liturgy.

“We’re going to place wreaths and/or poppies on all the graves of our veterans that are buried there,” said Griffin. “They’re not necessarily veterans that died in battle but also those who survived. It’s their stories that lived on through their lives.”

Innisfail house fire underlines need for smoke, carbon monoxide detectors
May 22, 2020 8:00 AM
Comments
We welcome your feedback and encourage you to share your thoughts. We ask that you be respectful of others and their points of view, refrain from personal attacks and stay on topic. To learn about our commenting policies and how we moderate, please read our Community Guidelines.