Majority of Innisfailians feeling positive and safe living in town
May 13, 2021 5:00 PM By: Johnnie Bachusky 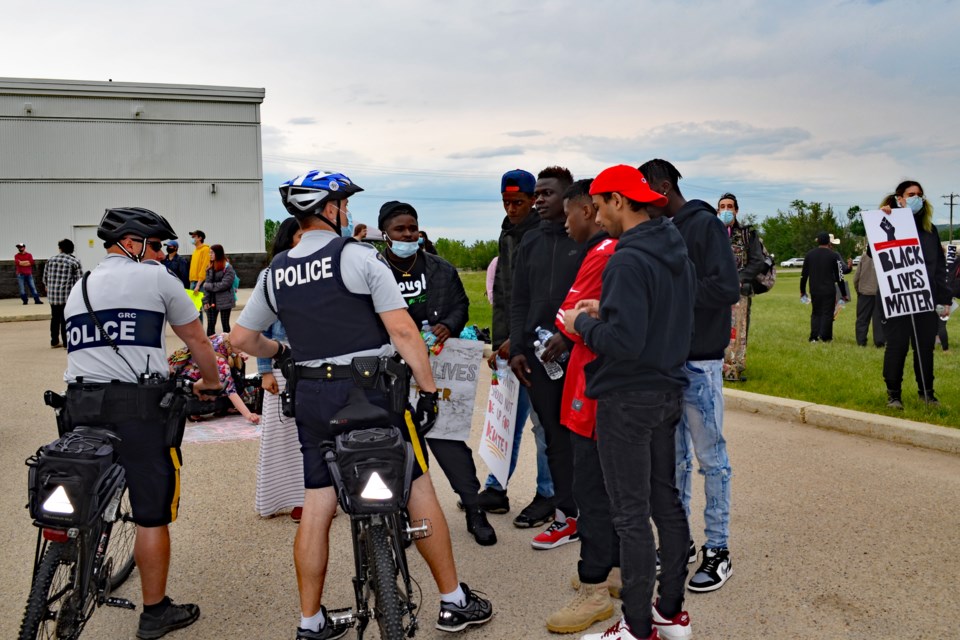 RCMP on bicycle patrol last June at the successful anti-racism rally in Innisfail. A just-released survey from the Innisfail Policing & Safe Community Committee is showing that enforcement is one of the highest rated areas the public would like to see the committee focus on. File Photo/MVP Staff

INNISFAIL – The results from a recent local survey is showing an overwhelming majority of citizens feel safe in Innisfail but still consider property crime a pressing priority to address, with a majority wanting increased law enforcement.

Last month, the town received the full results of the spring Innisfail Community Safety Survey, a project initiated by the Innisfail Policing & Safe Community Committee, which was officially established by the town in the fall of 2019.

A total of 126 citizens responded to the survey, with a minimum of 122 responses to all five questions, with two covering age bracket and place of residence.

The survey results showed that 84.68 per cent of respondents were from Innisfail,11.29 per cent from Red Deer County and the remaining listed as “other.” There were 90 respondents in three different age groups, between the ages of 35 and 64.

“As a committee we were very pleased with the number of responses as well as the information provided,” said Sue Haddow, who has been on the seven-member committee since its inception and chair since the fall of 2020.

“Everyone wants to live in a safe community and we hope that we can take some steps to address the concerns that have been brought to our attention.”

The survey wanted to know from respondents the level of safety they felt in the community, their priority security issues and the areas they wanted the policing committee to focus its attention on.

“Some of the concerns we have heard repeatedly include property theft, skateboard park issues, speeding and the desire for more RCMP presence,” she said. “Enforcement was one of the highest rated areas that the public would like to see the committee focus on.

“There are some areas that were identified that are beyond our scope but certainly are of concern to community members, issues such as the release of repeat offenders.”

On the question of how safe citizens felt in the community, 16 per cent said very safe, 41.60 per cent said safe and 35.20 per cent replied with somewhat safe. There were eight respondents (6.40 per cent) who felt unsafe and one (0.80 per cent) very unsafe.

With issues currently of most concern, 78.57 per cent of respondents said property crime, followed by property damage at 42.86 per cent and vehicle theft at 53.97 per cent.

Almost 70 per cent of respondents chose enforcement as the most important area it wanted the policing committee to focus on in the coming year.

Education and awareness were second most important with 39.34 per cent of respondents and multi-agency collaboration was third with 34.43 per cent.

“I was very pleased with the overall positivity shown by the community through the survey results,” she said. “There certainly are concerns for citizens, which are apparent on the survey and this is where we hope to be able to focus our work as a committee.

“It is our role to act as a liaison between the community and the RCMP and the information provided on the survey provides us with an excellent starting point.”

Coun. Don Harrison, one of two council’s representatives to the committee, briefed council on May 3 on the survey results and told members the news was “quite encouraging” from the 126 citizens who participated, with a majority of them indicating they were either “somewhat satisfied” or “very satisfied” about feeling safe in our community.

“I guess in the survey world that is a lot. There was good feedback, some really good comments,” said Harrison, adding the committee is now “dissecting” what the survey responses mean towards a plan to move forward.

“We can always improve, and I think if we work towards an action plan we certainly will.”

Innisfail RCMP Staff Sgt. Chris Matechuk, who is a non-voting part of the committee, was also pleased with the public response to the survey, and said the committee is committed to the community and are working well with the RCMP to deal with safety and security issues.

"We have more meeting coming up," he added. "But definitely the information learned from that committee will be directly inputted into our policing plan."