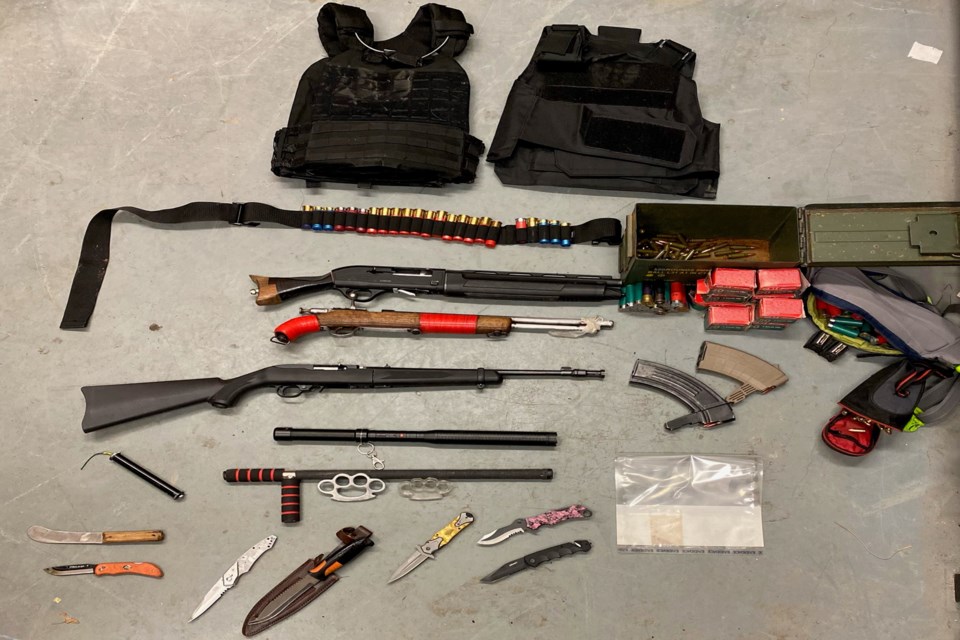 The arsenal of weapons seized by Innisfail RCMP during a local bust in the early morning hours of Jan. 10. Photo courtesty of Innisfail RCMP.

“The picture kind of speaks for itself. It was concerning – loaded weapons, an explosive device,” said Innisfail RCMP Staff Sgt. Chris Matechuk. "Yes, I would agree. It is quite an arsenal and that is a concern for public safety and the police officers. We are happy the vehicle stop went without incident.”

Matechuk said the incident began during the early morning hours of Jan. 10 when local Mounties were on patrol. They observed a vehicle travelling west on 50th Street.

He said police database checks on the vehicle’s licence plate showed it had been reported stolen out of Red Deer.

Matechuk said Mounties monitored the movements of the vehicle, and conducted a traffic stop in the 4600 block of 47th Avenue.

Matechuk said all four occupants of the vehicle were arrested safely, with no injuries or property damage.

He said the vehicle was searched and police located three firearms, two of which were loaded and sawed off, along with a large quantity of various types of ammunition, several sets of brass knuckles, several knives, a conducted energy weapon, body armour, identity documents, a suspected explosive device and a quantity of a substance believed to be fentanyl. All the weapons, ammunition, along with the fentanyl, were seized.

The RCMP Explosives Disposal Unit was called in from Edmonton to safely check and deal with the explosive device, believed to be a pipe bomb.

A total of 73 charges relating to weapons, body armour, drugs, property and identity documents have been laid against: